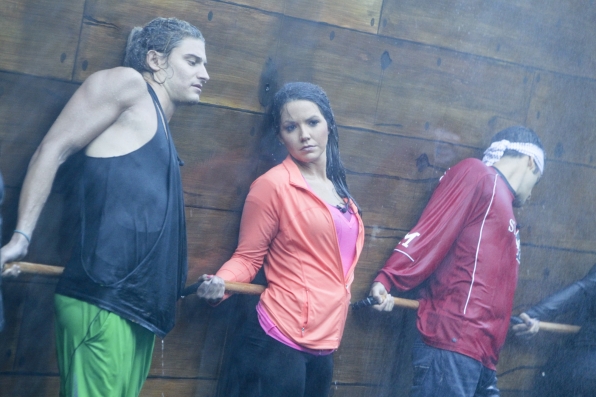 ML- Boogie called it last week, as we were reminded at the end of the "Previously on Big Brother" segment- this is Big Brother, you can bounce checks. When the nominations were revealed, one person was upset his key wasn't pulled, and another was upset that his was. Pretty crazy result to one of the craziest twists in BB history.

The endurance challenge (which I live-updated in last Thursday's blog) was a doozy, as they contestants not only had to hold onto bars and stand on planks at an angle, but they had to do so with freezing cold water pouring down on them and seagull poop splattering on their faces.

Historically, women and smaller guys have faired better in this type of challenge, and that proved the same tonight. The order of dropping out went: Boogie (strategic to appear weak), Jenn (too cold for her Puerto Rican blood), Joe, Ashley, Dan (also to appear weak, which Wil didn't buy), Frank, Wil (who made a deal with Danielle for safety), Shane and Janelle. I was surprised Janie didn't hold out longer, but I guess the 8 years since her original season have taken their toll on her.

The last three standing were Britney, Danielle and Ian. Thanks to a coach session from Dan and Britney and Ian's willingness to jump for safety, Danielle outlasted the others, giving us our first female HoH of the summer. Not only did she get a hug from Dan, she also got a big kiss from Shane. Somebody is finally realizing how much it pays to be in a BB showmance.

The targets started popping up quickly, with Boogie, Frank and even Janelle's named being thrown around. Danielle thinks Janelle is threatened by her- I doubt that's true, I think Janelle just has a harder time pretending to like Danielle than the rest of the house (Britney included) who bashed her non-stop on the feeds a few weeks ago.

Boogie and Frank tried stirring things up after Dan, in the heat of the Reset button action, told them Frank was the target in order to gain some favor of Boogie's. This basically backfired, as Boogie didn't trust Dan for not telling him when it would have mattered. Though Britney and tried to deny it, Dan admits to them he messed up and told Boogie the plan.

Dan used his allegiance with Danielle to veer her off the path of nominating coaches and instead thought she should nominate Wil and Frank. She agreed, until Wil reminded her that she promised him he wouldn't go home this week.

So what was she to do? Stick with the plan and get Frank and Wil up? Or honor the deal and send Janelle or Boogie up instead? She bounced her check and nominated Wil as a pawn against Frank, who has narrowly escaped too many evictions this summer already. Can he do it again?

Boogie, meanwhile, was insulted that she didn't nominate him when she had the chance. Don't get too cocky, buddy, there's still a veto to be played for!

If you want to know the veto competition results, keep reading below! If not, go check out some of our other articles.

LIVE FEED SPOILERS
The Veto was the yankee swap one done in seasons past, where whoever places higher in a competition can open a box and either keep the prize or trade it for an opened prize.
The prizes went as follows:
Frank got stuck in a "Spirit-tard", a unitard with pom-poms. He hates wearing it and has been lax keeping it on. Could he get a penalty vote?
Wil got $5,000 cash
Jenn got a vacation, which Ian traded away
Ian got a punishment of being dressed like a dog for 24 hours. He has to sleep in a doghouse and have someone holding his leash if he ever goes anywhere.
Shane got a Veto pass, allowing him to play in a future veto
Danielle got the Veto this week

There has been much discussion of backdooring Janelle. Danielle hates her, Brit is sick of her, Boogie and Frank are all for it. However, Dan is still adamant about keeping the target off of the coaches, so as of right now, the veto probably won't be used and Frank will go home. The veto ceremony is tomorrow so things can still change by then!

Posted by Dual Redundancy at 8:56 PM