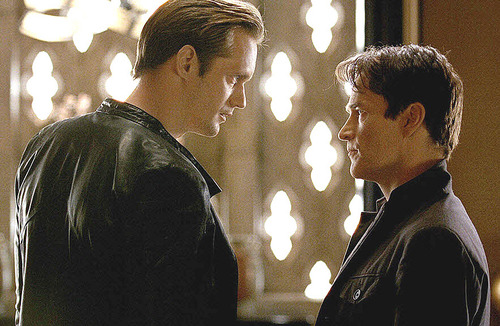 ML- We got some closure to a few of the more irritating storylines of the season tonight, but the speed with which they were all resolved felt pretty rushed.

Hopefully, we will never hear the words "ifrit" or "Obama" on this show again.

Let's go story by story to see what worked and what didn't:

1. Terry, Arlene & Patrick: No more ifrit business! Terry told Arlene he would find Patrick and challenge him to a fair fight. She begged him to think about her, Mikey and the kids, and he said (in very Han Solo-esque fashion) that they're the only reason he's fighting at all.

Patrick snuck up on Arlene and put a gun to her head as she entered Merlottes. When Terry arrived, Patrick ordered him to put down his weapon and get on his knees or else Arlene would pay the price. Terry did so. Turns out Patrick has a pregnant wife who he promised he'd return home to. In a fury he throws Arlene to the side, giving her time to grab something sharp and stab him in the back, potentially hitting an artery.

Terry gets the gun and hesitates. He doesn't want to kill Patrick. The woman he murdered appears, however, and tells him to do what must be done. Without missing a beat he fires two quick shots at Patrick's head. She is satisfied- blood has been repaid with blood- and the ifrit shows itself to eat up Patrick's body.

This worked mostly because of the fine acting by Carrie Preston and Scott Foley, and, well, because it ended a dumb storyline in a satisfying way.

2. Sookie and "The Dragon": Again this worked because it spells the end for the masked Obama klansmen. Sookie started off searching for information on Warlow with Lafayette (who had some great lines tonight, like not being "gmail for dead bitches"). This lead her to Bud Deerborne, who confirmed her parents may have been killed by vampires. Sookie tried reading him for more info, but couldn't get anymore, especially after she was hit in the head by a large woman in a pink dress, the same big fat woman Sam smelled while they rescued Jessica.

The woman, Sweetie Desartes, is Bud's lover, a square-dancing champion and, contrary to Andy and Jason's suspicions the real Dragon (aka lead Klansman). She captured Hoyt and Sookie and wants to rid the world of all supes. Her idea: supes have sent this country to the pigs, so feed the supes to the pigs.

I suppose we should include the Andy/Jason and Sam/Luna stories here. Actually, this is the closest True Blood has come to an overwhelming A-story in quite some time.

Luna wanted REVENGEE for the people who shot at her and her daughter, so she and Sam shifted themselves as flies on the wall after a brief fight that ended in unsuspecting "I love yous" from both sides. It was a well-done way of getting that across without it seeming cheesy.

They eavesdropped on Jason and Andy, who examined the Obama vandals' videos on keepamericahuman.com and noticed the boots of one of the guys matched those given to Bud Deerborne back when he retired. Sam and Luna took off first.

When Sweetie released the pigs on an unconscious Sookie and Hoyt, she didn't expect for one to be Sam, who proceeded to kick some Obama ass, Eastern Promises-style (Read: totally naked). By the time Andy and Jason arrived, Sam had disarmed all but Bud, who was poised to hurl a shovel at him. Andy warned him to put it down, but when Bud exclaimed "Humans Rule!", Andy shot him down. It was sad to see Bud go, but he obviously had turned into a character so far from his old self that it was a necessary loss.

Luna chased down Sweetie and gave her some good punches. I never got too attached to Luna, probably because she's not from the original few seasons and I never expect newer additions to survive too long. After tonight, though, I'm a little more sold on her and her story. When she and Sam were able to finally have some peace, it was a relief.

3. Pam & Tara: These two had plenty of bitchy one-liners to add to their running count. At the end, when a vamp plopped himself in Eric's throne and fed on a human, Pam tried to kick him out. He revealed himself as newly appointed Sheriff under a repealed ban on feeding on humans passed by the Authority. This new story isn't immediately frustrating, so I'm excited to see where it goes.

4. Russell, Steve & The Werewolves: It's fun to see Russell grooming Steve as his new Talbot, and the scene at the end where he gave out his blood and stole young Emma from Martha solidified him as one of the great villains in True Blood history. I half expected him to kill Emma, since she was in dog form and that'd be a lot easier on the audience than to kill her in human form. But instead, he's giving her to Steve as a pet. Even J.D. wasn't too happy about this.

5. Bill/Salome, Eric/Nora: I'm just over this story. Skaarsgard and Moyer are doing fantastic jobs but the interest level is not there. Bill is a traitor now with some mad religious ideals brought upon by Salome's trippy blood, and Eric is the one holding to the moral right. This ethical role-reversal isn't worth the amount of weird religious and political head-beating we go through every week. I don't care about mainstreaming or Sanguinistas. Like Pam, there are two things I stay away from: humans who eat a lot of fish and politics.

To recap anyway, Eric tried getting the tech-savvy girl to break them out, but she needs Salome's blood to open the door out. Eric tries getting Bill to take it from her, which leads to Bill's hallucinogenic sex with Salome/Sookie/Lilith. Eric approaches Nora and plays that he's on her side, but injects her with some silver to knock her out long enough for them to escape. Bill arrives, but not with the blood he promised, with the authority. Eric, the viking who never surrenders, surrenders. And we're back to square one.

6. Alcide: Alcide flashes back to when he first joined the pack, when his packmaster father gave a speech about man and beast to young Alcide and young Debbie Pelt, who looked a lot like Miley Cyrus. Young Alcide joined the pack (duh).

Today's abjured Alcide returned to his father's trailer. The once inspirational man now lies in bed and bets his disability check on the races. Alcide says he's nothing like his old man, but the old man isn't so sure.

In a fairly tight episode story-wise, the Alcide digression just felt out of place. I know it's setting something up for later, but I've had enough Were business to last me two more seasons.