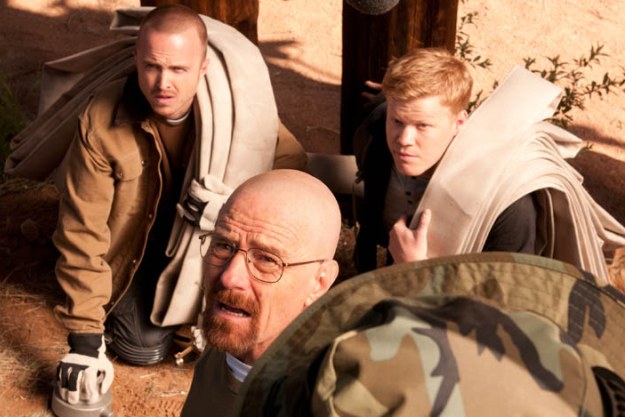 ML- Last week ended with Walt vowing "there's no stopping this train." This week involved Walt and co. literally stopping a train. Is this a commentary on Walt's plans being parasitic and/or self-destructive? Or is it just some blatant Hell on Wheels cross-promotion? I'll have to let you decide, because I'm too busy reminiscing about Friday Night Lights.

There's on more parallel that stood out that I want to mention before getting to the actual recap- Jesse mentioned their heist was reminiscent of Jesse James. Earlier this season, Mike warned Walt that just because you killed Jesse James (Gus Fring), it doesn't make you Jesse James. So is Walt merely the coward Robert Ford, or is he a genuine Jesse James? And if so, who will be his Robert Ford? According to Wikipedia, Robert Ford was staying in James' home at the time he killed the infamous outlaw. Is that Skyler? Flynn? BABY HOLLY?!?!

Okay, enough pondering without reaching any definite conclusions. The episode began with a cold open of cool POV bike shots as a kid made his way through the desert searching for something. He stopped when he found it- a tarantula, which he let crawl all over his hand before he put it in a jar and took it with him on his way. We'd never seen this kid before, so I was mighty confused as to who he was or what part he played. And, to be honest, I forgot about him in the hustle and bustle that followed, which is exactly what the producers wanted.

Walt visited Hank at his new office, showing off his new watch and throwing Skyler under the bus in an emotional breakdown designed to coerce Hank into leaving the room to comfort him. Once Hank left the room, Walt quickly bugged Hank's computer, as well as a picture of Hank and Marie. Nothing is sacred to Walt, especially family. Hank enters just seconds too late, but comforts Walt that the night is darkest just before the dawn.

I bet Lydia was hoping that was the case for her. Mike, Walt and Jesse cuffed her to a table and forced her to memorize a script and repeat it to Hank without crying, panicking or otherwise warning him of her state of danger. If she does, Mike repeats, he will pull out his pistol and shoot her in the head.

She tells Hank she noticed the GPS tracker on a barrel of methylamine and wondered if he had anything to do with it. Of course, this was so Mike could prove his theory that Lydia herself planted the tracker. Hank didn't know anything about it and told her to keep it quiet.

Mike had heard enough. He was ready to shoot her in the head with his pistol, despite Lydia and Jesse's claims of her innocence. Walt voted with Mike, however, to kill her, after Mike comments that "everyone sounds like Meryl Streep with a gun to their head" (callback to Walt's lie to Jesse last season?).

Fortunately for her, Walt's bug kept working as Hank called the Houston DEA, who confirmed that they had tagged all of the methylamine. This marks another instance where Jesse was right over Walt. Mike still wanted Lydia dead, knowing she'd turn a gun or badge on them the first chance that she got. She had a plan, however, to lead them to an ocean of methylamine. I have a bad feeing for Mike that letting Lydia live so long will in fact lead to his downfall.

Lydia asks Walt to swear on his children that she won't be harmed. I could be wrong, but I didn't hear him make this deal. Instead, she spelled out a hyper-elaborate plan of a train heist:

A freight train with industrial chemicals passes across the country, and when it gets to a remote 3-mile area with no cell service or way for the train's two engineers to contact their home plant, they'd strike, like Jesse James.

How would they know which car was right? Lydia would get the manifest that morning. Also, she'd expect to be paid- something neither Walt nor Mike was down with. How would they deal with witnesses? As Mike points out, there are two types of heists: the ones where you get away, and the ones where you leave witnesses. Jesse had the answer for this one- what if they didn't even know the methylamine was stolen?

Hank and Marie played parents, giving baby Holly boob milk (none of that soy crap) and calling Walter Jr./Flynn "Emo McGee". So, basically, these kids are going to be screwed up no matter who raises them. Flynn hears them talking crap and wants to go home.

But enough about them, let's get to the heist. They bury two tanks in the dirt after measuring the distance to the bridge. One tank Todd fills with water, the other is meant for methylamine. The plan, which is expositionally explained to the unknowing noob of the plot acting as the audience, is to replace the methylamine they take with water, in a proportionally weighted manner so that when the train is weighed at its destination, there will be no way of knowing anything was taken.

Walt and Jesse make it clear to Todd that nobody can ever know about this heist. Nobody. What they intend to be a threat is a deadly contract that comes up again at the end of the episode.

Flynn freaks that he has to leave and wants a reason for being kicked out of his own house. Walt pulls the old "We're your parents and we say so" card, and that is that. He tries to find solace in his decision with Skyler, who wants nothing to do with him. She's a hostage, not his wife, but she will continue to launder his money and be whatever he asks as long as the children aren't there when the evil catches up to them. To this, I think he agrees, and informs her of his lie he told Hank about her shrink.

Then she notices his rolled up sleeves and sand-crusted arms. Burying bodies?, she boldly asks. He responds just as bluntly. Robbing a train.

BOLD BREAKING BAD PREDICTION: Skyler's plan to keep Flynn and Holly safe by leaving them at Hank and Marie's may actually backfire and put them in danger when Hank is targeted by one of Lydia's men and/or Mike.

The plan goes off for a while without a hitch. Lydia calls in the car. An accomplices blocks the tracks. Mike stays on lookout. When the train arrives, Todd climbs to the top and Jesse gets underneath. Walt stays by the tanks to make sure they get their 1,000 gallons. Things go swimmingly for a while.

That's my main problem with this episode- there was never a doubt in my mind that they would succeed. Where is the drama if we don't doubt our main characters will succeed? The arrival of the other car that pushes the broken-down car out of the way was a good "uh-oh" moment, but still, the episode was so well crafted that there was no way it would fail.

That doesn't mean it was all bad. By this point, Walt, Jesse and Mike are pros, and we need to see them  at their prime a bit. I just mean from a storytelling sense, there could have been less certainty in the plan, is all.

But they do succeed, naturally, at the last second. They celebrate with "Yeah, bitch"es and high fives. All until they notice the problem- the kid on the bike from earlier in the episode saw the whole thing.

Here, what I had planned on grading a B+ episode all came together. Todd, under the orders of letting nobody know anything about the heist, pulls out a gun and shoots the kid. Dead.

Children are not safe in this Breaking Bad universe. Flynn and Holly, watch your backs. Do not doubt a mother's instinct.

Episode Grade: A-
Episode MVP: Aaron Paul (not an Emmy-caliber episode for him, but the best he's had thus far)
Original Airdate: 8/12/2012

Posted by Dual Redundancy at 10:48 AM