TV Review: True Blood 5x08: "Somebody That I Used to Know" 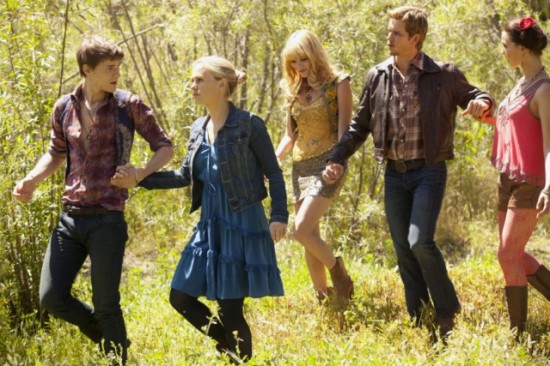 ML- It all hit me while watching Sunday's episode- Sookie is like Harry Potter. Oftentimes, she's more unlikable than the people around her. She was orphaned as a baby. Now, we find out she has a weird psychic connection to the dark being, Warlow, that murdered her parents, just like Harry had with Voldemort. I think Charlaine Harris (author of the Sookie Stackhouse novels) and J.K. Rowling should have a challenge similar to that of the were's tonight: hunt down and kill whoever wrote those Twilight books.

Things started falling into place for me this episode, at long last. Seeing as how there are so many storylines that these reviews become so unstructured anyways, I'm going to start dividing them into two categories: Things I Liked, Things I Didn't.

Things I Liked:
-Lafayette moving on from Jesus, though jarring how drastically he changed within the episode, was necessary. We need sassy Lafayette back, and he brought it, waving his hands around and doing his medium thing. Hopefully "smoke a blunt bidness" becomes a saying, somewhere.

-Terry and Patrick having to kill each other. It was good to see Arlene and Holly's plan to hold a fake seance backfire, and this leads to some interesting developments. Will killing Patrick really be a good thing for poor, damaged Terry? I could see him giving his life to let his friend live. Or, he kills him, and starts going down a darker path.

-Luna as Sam. I don't understand the logistics of the swap (what shifter in her family did Luna kill to become a Skinwalker?) but it's always fun to see these actors change up their characters, and Trammell did a great job. I'm not sure if I'm ready for Luna to die, though. Hasn't Sam been through enough tragedy? He and Tara should get back together and wallow in their misery.

-Speaking of Tara, I liked her stance against the snob from high school, and loved Pam's handling of her. Line of the night: Pam's angry face and happy face are the same.

-Hoyt and Jessica. I wasn't expecting her to end up in that house, but I knew Hoyt wouldn't hurt her, even though he hates her. Her honesty about falling out of love was a good moment, and hopefully will give Hoyt some closure.

-Eric's handling of Nora and her new stance on Godric was well done. It's always good to see glimpses of Godric and the loyalty Eric truly can show.

-Bill's flashbacks to visiting his ailing daughter, as she begged to be made young like he was. We left the flashback without learning for sure if he turned her or not.

-The fact that the vampire that killed Mr. and Mrs. Stackhouse wasn't Bill or Eric.

-The plan to begin bombing Tru Blood factories. When you start a vendetta against the title of your show, it's either going to be very exciting or a brilliant metaphor for a show running itself into the ground. We'll see how they handle it!

Things I Didn't Like:
-The were stuff is still really annoying, but as long as the actor playing Alcide is willing to get completely in the buff every episode, I have a feeling he'll keep getting big storylines.

-Did Jason know who Warlow was? He had a knowing expression after she said the name, but it wasn't addressed after.

Most everything hit its mark for me this week, but perhaps the mark has just been lowered after 7 weeks of mediocre-to-good episodes. This is the first in the "A" range, and hopefully, a sign of things to come.