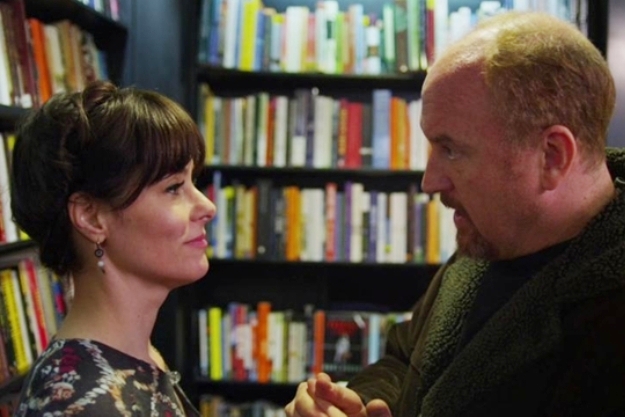 
ML- We got another glimpse inside the brilliant, messed-up mind of Louis C.K. this week thanks to the use of his fantasies. After pressure from his daughters to get a girlfriend (they slyly brought up mommy's boyfriend who had been on a blimp, in a nudging only kids can get away with), he set his sights on locking down a new serious girlfriend to impress the girls with.

His first choice was another comedian who wasn't all that funny, in my opinion, aside from her spot-on Delilah talk-show impression. She and Louie went back to her place and hooked up, then turned on the ultimate aphrodisiac, reality TV. I must say, I'm already hooked on whatever show they were watching, which featured a guy stab another woman in the house in an attempt to "be more aggressive". This is almost as crazy as the Big Brother house this summer!

She said she wanted another go-around, not because she liked it, but to hopefully improve on the first time. Louie tried luring her into a date, which she vehemently denied, because she was there for "THAT" (his penis) and now he had ruined her all day twice, the first time being the awful sex.

Louie then experienced some well-produced fantasies at his daughter's school. Every time he saw a woman, the seductive music would play that every guy hears in his when he thinks about romancing a girl, and he begins imagining her playing with the kids. Not your average fantasy, but Louie here isn't looking for sex, he wants to not be the loser dad.

The first teacher shuts the door in his face, so he continues down the hall. The next teacher gets the same treatment, until he sees the ring on her finger. He goes again and finds a teacher with no hold-ups, except she's not what one would call classically attractive, and that throws Louie's fantasy into a tailspin. Frustrated, he goes to the bookstore to fill the "librarian" fantasy, and comes across Parker Posey as an employee who really "gets" his daughter's adolescent mindset. They bond, as anyone who comes in contact with Parker Posey would naturally do, and by shaving his beard, we see he's preparing to make a big move.

He makes the move by cornering her in the bookstore and talking until he runs out of things to say, most of them knocking his own appearance and awkwardly complimenting her, and the entire scene is highlighted by Posey's ability to show convincing facial expressions in response to his weirdness. She accepts the date, setting the stage for next week's "Part 2".

Overall, this episode had some nice features with the flashback, but broke the Louie mold of fitting multiple vignettes in a single episode to spreading one over 2 episodes. We'll see how Part 2 wraps things up, but for now, I was just content with this.