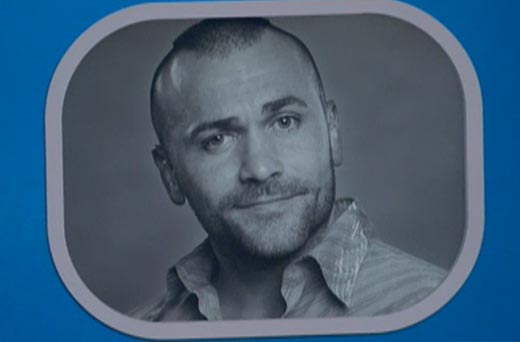 
ML- I had such high hopes for Willie coming into this season of Big Brother. He seemed much calmer, cooler and more collected than his brother Russell, but in hindsight, that was only because he was given a position of power within the first 6 hours of his arrival. Once he did not get his way with the eviction, lost the HoH to his biggest enemy, was reduced to a Have-Not and shunned by his entire team, he self-destructed in classic Hantz fashion.

I missed the first 15 minutes of tonight's episode, but assume a lot of it was spent recapping the eviction and HoH and Willie's new position as a marked man. As smart as it was for Britney, Shane and JoJo to dissociate from Willie, I actually felt bad for him. The psychological pressures of the house must be insane, and to go from everyone wanting to talk to you when you're HoH and constantly kissing your ass to everyone hating your guts and avoiding you, you're bound to react with some hostility. By taking it to a place of violence, however, Willie crossed one of the sacred reality show lines.

While everyone was distancing themselves from Willie, new relationships began to emerge. We saw the Slop Date between Ian and Ashley, which he totally orchestrated because he knows CBS reality shows adore showmances. Ian doesn't seem to me like a threat in a social sense, but he is in the way he knows how to fit into what production wants. While he and Ashley did have some chemistry (though I'm not sure if it was organic or inorganic) the whole scenario felt forced to me.

Having watched many hours of live feeds, the package on Shane and Danielle felt forced as well. I try not to spoil in this section of the blog but it seems misleading for BB to present the relationship one way and know it isn't that way. Basically, Danielle is super into Shane, so much that she's basically admitted she came into the house to find a showmance (if things with Ashley don't pan out, Ian will probably be ready and willing to step in!), however, Shane really doesn't seem to have any interest in Danielle and has talked negatively about her on many occasions. He's using her as a pawn, not being charmed by her brown hair and southern accent.

Janie showed some emotion tonight too as Dan brought up how different it is playing when you have a family at home. Janelle has gotten a lot of flack for leaving her newborn baby behind, which is deserved, and her handling of the situation by saying things like "sometimes I have a little bit of a thought about my daughter" certainly doesn't put her in the running for Mother of the Year.

But she's not looking to be Mother of the Year, she's looking to be the Comp Queen, which she managed to get a step closer in accomplishing today by winning the Coaches Competition. The four coaches were dressed like '90s rapper M.C. Hammer and could only move left-right, Hammertime style. I must say, Dan had the best moves of all of the coaches, but since he was continuing his plot to throw every challenge and appear week, he didn't get to put those moves to the test.

Britney lead the challenge for a while, transferring more stacks of cash back and forth across the balance beam than any of her competitors. Unfortunately, one of the rules was if you drop any cash or fall off the balance beam, you're out. Britney knocked off some cash, ruining her plan to win and trade Willie away to get some heat off of her back.

Boogie, too, didn't properly adhere to the rules. He technically beat Janelle but stepped off before hitting his buzzer, disqualifying him. Janie "won" against two disqualified contestants and someone who was throwing the competition, but a win is a win is a win. She chose not to trade anyone and saved Ashley in an attempt to strengthen their bond. She also chose all of Team Britney- Willie, Shane and JoJo- to be have nots, along with volunteer Ian.

Fuming over his state in the game, Willie then lashed out. He head butted Joe and threw pork rinds at Janelle, neither of whom backed down or showed any fear. Production ordered Willie into the DR, and later the Voice of Grod (Alison Grodner, Big Brother EP) announced over the PA that violence would not be tolerated in the house and that Willie was ejected from the game.

This puts a huge dent in Britney's plans, as Frank is still HoH and will get to knock 2 members from her side out instead of just Willie. It also messes up production, I assume, as by the end of week 2 the house will be down 4 people. Will Coaches enter sooner rather than later? It's possible, as the eliminated house guests thus far haven't been sequestered and can't really re-enter the game.


Frank went ahead and nominated Shane and JoJo, but Shane won the Veto. Danielle is the expected replacement nominee with JoJo the expected target, but things could still change before the eviction on Thursday night. Things have definitely calmed down with Willie out of the house!
Posted by Dual Redundancy at 9:08 PM