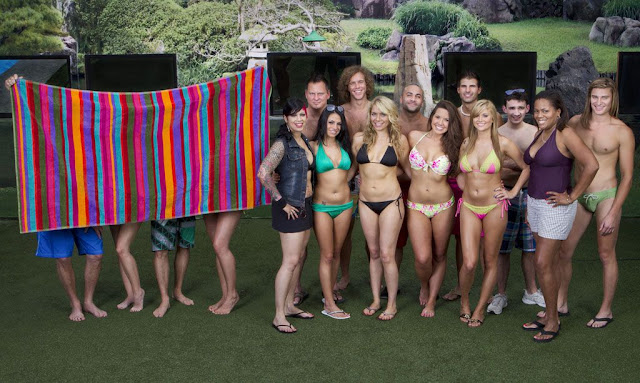 ML- To paraphrase the great Janelle Pierzina, "Hi hi, bitches!" Welcome to America's favorite guilty pleasure life consumer, Big Brother, which began its 14th season with a bang- that bang being the sound of Jodi's face smacking against the animatronic bed over and over again.

The game has already taken an incredibly drastic change with the addition of four legendary (Copyright Barney Stinson, CBS) coaches to guide the noobs through the game, which is a good thing because it seems as though none of them have watched much Big Brother in the past. These coaches will be playing their own game; whoever mentors someone to victory will pocket $100,000 of their own.
The coaches are: Mike "Boogie" Malin, BB2 & BB7, Janelle Pierzina, BB6 & BB7, Dan Gheesling, BB10 and Britney Haynes, BB12.

I'd say the first three choices were spot-on, but the addition of Britney nearly ruins the plan. Despite being a diary room goddess and one of the funniest house guests in history, she (admittedly) played terribly last time and shouldn't have been considered as a mentor over the likes of Jun, Danielle or Dani Donato. Hell, even RACHEL would have been better at mentoring, but Britney proved tonight that she's at least going to give the other coaches a run for their money.

Before we continue (or should I say BUT FIRST) let's go over the 12 newbies and quick first impressions of them from their awful, fake "key finding" packages.

FRANK- Frank is unemployed, something Jodi was 98% sure was a lie. Unfortunately, the margin of error tonight was 1.9%, or something. Ian would probably explain it better. Anyway, Frank is a BB super fan who doesn't fit the stereotypical BB super fan mold, a dangerous combination for the rest of the house. Frank was the first choice to join TEAM BOOGIE.


DANIELLE- My first thought was "Jordan 2.0", which isn't a bad thing at all. She's cute and has that southern drawl that makes everyone seem just an ounce more likable (unless your last name is Hantz). She decided to lie about her job, saying she's a kindergarden teacher rather than admitting to being a nursing student. A risky move, as it'll be easy to slip up while in the house for so long and instantly lose  people's trust. Danielle was a second round pick for TEAM DAN.


SHANE- He flips houses for a living, so I can't wait to hear all the puns of him "flipping" the house around once he gets on the block. I don't expect that to take too long, as his physicality and apparent lack of strategic game will make him a prime target for some early nominations. So of course, he was the first pick for TEAM BRITNEY.

JODI- "Too normal", my reality TV-addled brain warned as she came upon my screen. She doesn't have perfect features or a perfect body. How did she manage to sneak into the house and fool everyone, even the great and powerful Chenbot? Despite that (or perhaps because of it) she came across as down to earth and eager to play, which, in the Big Brother world, gets you picked last of everyone, ending up on TEAM DAN.

IAN- Ian and Cochran from Survivor were probably in the same pile of applications sorted at CBS, as both fit the stereotypical "nerd" slot. Unlike Cochran, Ian may be getting some action soon, as Ashley has showed interest in him, because he "wears glasses." Girl really knows how to pick 'em. His excitement at the sight of Boogie, Dan and Janelle made me smile, as it's exactly how I'd be if put in the house. Except I wear contacts, so I'd have no shot at an Ashley showmance, so I guess he knows what he's doing. He was the second choice for TEAM BOOGIE.

WIL- With 1 L. Guys. 1 L. There's already a Willie, this is Wil. Jeez. The "Southern gay" (who was an American Idol reject that I actually remember) tried making a hair alliance with Frank within seconds of entering the house. He could be a very up-front player, which makes for great TV, but often doesn't lead to the big bucks. Hopefully he will find some great tutelage as first pick under TEAM JANELLE.

JOJO- Or should I say JowwJoww, BB's answer to the Jersey Shore stereotype (because we have all forgotten Enzo, yes? Yes.) She's from Staten Island and there to do New York proud, whatever that means. My expectations for her as a player are low, so I hope she gets drunk and fights with Janelle a lot. She was the final pick for TEAM BRITNEY.

WILLIE HANTZ- Yes, Russell's brother. No, he probably won't win, unless producer Allison Grodner deems it fitting, then which case he absolutely will. He's actually a lot more likable than Russell, but everybody was onto him within minutes (Ian gave it a 99.9% certainty rating- nice going, Ian!) but he's still trying to play dumb. Absolutely foolish, he should own up and say he's nothing like Russell, because literally, I thought it was Russell when he stood outside the door. Actually, since he's taller, it looked like Russell standing on a smaller Hantz' s shoulders. Brush that Hantz off yo' shoulder, Willie, and do TEAM BRITNEY proud!

KARA- The Playboy model has many assets that will help her succeed in this game, but unfortunately, they're out for everyone to see. I'm pointing to her boobies. She's dated rockstars in the past, so all I have to say is: Haaaaave you met Jenn? (Copyright: Barney Stinson, CBS). She's looking for a showmance, which has benefitted BB girls the past few seasons, so perhaps she's got more going on than we've all seen on NSFW sites? Now we know why she was chosen for TEAM DAN.


JOE- The chef, who only made it into the house because another contestant quit, doesn't seem to be someone who can relax and chill with all of the young kids in the house. Cooking is a good skill to have, however, and his age could also be a benefit if they deem him as out of his physical prime. Hopefully he can find strengths from his qualities and be a good player for TEAM JANELLE.

JENN- The tattooed rockstar says she's either loved or despised, which means she'll probably go sooner rather than later in the house. People want to put up people that the majority of people are against, to seem like less of a bad guy. If half the house hates Jenn, it'll be easy to find the numbers to oust her. Can her personality shine through the unique appearance enough to form strong bonds? That's a task for her mentor on TEAM BOOGIE.

ASHLEY- The mobile spray tanner has a personality disconnect that I noticed with Porsche last year- everything she says seems staged or scripted or fake. Maybe it's just her weird baby voice? Is the house really going to be "yummy"? I don't think so. Hopefully her mentor, a friend of Porsche's, can direct her in the right way on TEAM JANELLE.


So there we have it, 12 people on 4 teams- except by the end of the night, Julie warns, one of them would be leaving. Bonkers.

The challenge is different from a regular Big Brother competition: The team that comes in first will let their mentor choose one of them to be HoH, and the team that comes in last will force its mentor to eliminate someone that night. This twist definitely favors Team Britney, which has arguably the two most athletic guys in the house in Willie and Shane, and takes a lot of power out of the contestants hands and into the coach's. This is not the Big Brother we all know and love, this is an exhibition match to see which coach can take down the others. I both hate and love it at the same time.

The challenge involved house guests hopping in pajamas onto spinning and bucking beds to retrieve teddy bears for their slumber party, Frogger-style. (Never thought I'd write that sentence in my life). Each houseguest had to retrieve one bear, then send one person to the other side to hit the buzzer. If, at 20 minutes in, a team had not completed, a coach could substitute another player to run the course.

The competition was pretty even throughout, with the men dominating way easier than the ladies. That didn't bode well for Team Dan, who actually seemed like a good coach (considering he is a coach in real life) but couldn't muster the same inner power that Coach Taylor could manage from his Panthers. Clear eyes, busted lips, sure to lose?

I ranked the teams as they were announced as Boogie > Dan > Janelle > Britney, and wouldn't you know it, my last place team came out on top. Physicality won out and Britney's team was able to take control of the house for week one. It'll be interesting to see who she advises her HoH to target, considering she loves Janelle as much as I do. But I'm getting ahead of myself- the other teams were neck and neck, but Dan's team played like a bunch of girls (a joke, because they all are girls, not a commentary on females in sports- have you SEEN the Williams sisters?) and, unfortunately for the Renegade himself, he placed behind both Janelle and Boogie's teams.

Brit selected Willie as her first HoH, a smart move to secure the rest of the house doesn't get into Shane or JoJo's ears about knocking the Hantz out of the game. He equate this "victory" to winning a national championship. Hear that, Olympians? Ain't nobody got nothin' on Willie Hantz!

As Dan debated his options, I came to my own conclusion- boot Jodi. Yes she's likable in a dorky kind of way, but she just doesn't belong with the rest of the fame whores in the house. And Dan agreed, sending Jodi packing as the first casualty of the summer, and weeding his team down to only Kara and Danielle.

What should Willie do? One strategy would be to pick Kara and Danielle as nominees. That way you don't piss off any other coaches and are one step closer to ridding Dan from the house. Or does he go after bigger threats like Frank and Ian on Team Boogie? I'm ecstatic to see how this twist plays out, and especially to see what "new power" will be introduced into the game. Also, what's the over-under on when the mentors can enter the game as actual house guests? I love the idea of Janelle having no consequences of getting into drunk fights with everyone, but it'd be much sweeter to se her finally walk away with the oversized check.


Another note: I will be watching the live feeds and Big Brother: After Dark this year, so this may be the first night where spoilers don't come into play in the reviews. I'll try to limit conversation to only CBS info and maybe use the end for spoiler-y discussion? If you care at all, let me know in the comments! Hope you guys keep reading, it's going to be a long, fun summer!