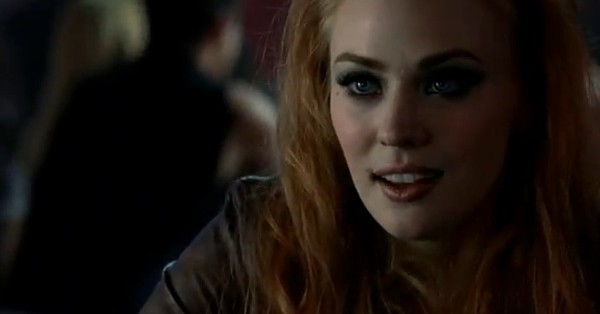 ML- It's funny: for most of last season, my biggest complaint was that the writers of True Blood seemed lost in all of the stories they were trying to tell with their ridiculously massive cast of characters. Now, as the show's footing is getting steadier once again, the writers actually do get Lost, by adding a freaking smoke monster to their supernatural cache.

Technically, its an ifrit, a beast probably familiar to Final Fantasy players, but both the visual and sound effects totally copied off of the Man in Black's smokey state. If anyone had "ifrit" on their supernatural bingo card, congrats. Have a shot of peach schnapps.

The episode began with Alcide about to get some fairy tail as he and Sookie made their way to the bedroom. I'm sure the Magic Mike team is quite happy Joe Manganiello continues to take his shirt off here, as it can only help their business. Unfortunately for Alcide, Sookie made like the episode title suggested and "booted", probably because she's as sick of her sexcapades as the audience. As if that weren't enough to end sexy time, Bill and Eric appeared at the door looking to recruit Sook in their mission.

Sookie and her men set out to find Russell Edgington, who, from the glimpses she got in her mind-reading of bumbling Doug, looked a lot like Voldemort in the King's Cross scene of the last Harry Potter movie (which, side note, HBO labels as "Harry Potter 8". The nerve.) She also discovers that a female Authority member was seen uncovering him. Bill is quick to accuse Nora, Eric's "sister"/lover, but since we have learned that Bill is rarely right about anything ever on this show, it seems more likely that Salome is the vamp responsible. That's going to be awkward when Roman finds out.

The mystery gang then makes their way to an abandoned asylum, and Sookie refuses to stay outside, on the grounds of feminism, basic horror movie logic and having to "pee something fierce". Paquin is way more enjoyable when she's playing a drunk, which means Sook needs to hit up Merlottes more this season. Also, don't you think Sookie should get her own Medium-style spin-off where she tracks bad guys using mind-reading and microwave fingers?

Doug lives up to the horror trope of scaredy fat guy and bolts before the going gets tough, leading them to a room full of captive people Russell plans on draining. When they finally confront the big man himself, he's in much better shape than his bloody Voldemort-self, but still looks weak. How a weak but ancient vampire compares to Bill or Eric, I'm not sure, but I doubt he's going to go down without a fight. I also doubt Denis O'Hare, who salvaged the train wreck that was season 3, is going to disappoint here.

Getting back to the ifrit at hand, Terry and Patrick are held at gunpoint by their crazed friend, who asks "Did anything follow you here?" This immediately reminded me of Lost season 1, when Rousseau held Sayid captive, but little did I expect things to get all smokey up in that bitch. Flashbacks revealed that after their shootout in Iraq, a dying Muslim woman that Patrick ordered Terry to kill cursed them with the ifrit, which rose up from the pile of bodies as it burned. If anyone is looking to be a dead body extra, this sure is the show for you, as long as you don't mind rats or gasoline.

Meanwhile, Jason had a trippy dream in which he was a kid again rocking a He-Man onesie and his parents were still alive. Things turned weird fast, as blood began spurting out into their breakfast cereal and his mother offered him a blow job, because he deals with his problems by using sex. Really, true Blood, we're getting incestuous? Leave that to Game of Thrones... and Boardwalk Empire... and Bored to Death...

When he woke he was butt naked, as was Andy, and neither remembered getting blinded by the light by the fairy bouncers the night before. (True Blood spin-off idea 2: Andy and Jason have Hangover-style adventures!) They meet up at the crime scene of Sam's dead shifter friends and Jason lets Andy know his lady friend was a fairy, to which Andy responded with the line of the night, "I don't care if those ladies are fairies or leprechauns or fuckin' ewoks!" They notice the shooter(s) used wooden bullets, a sign that they're targeting supernaturals in particular.

It seems like Jason is regressing back to his season 1 attitude towards vampires, now convinced that they had a hand in the death of his parents. As frustrating as this can be to watch it makes sense- people don't really lose their prejudices, they just get better at keeping them to themselves. It also fits with the episode's theme of pondering whether people really change (funny enough, that was also Weeds' theme tonight, which I will be reviewing right after this.)

The theme was handled with Tara, who has gone from the show's biggest problem to its freshest storyline. She looked damn good bar tending at Fangtasia under Pam's orders, and commented on how she's basically a slave now. "The more things change, the more they stay the same", she laments. Given her history with joining creepy cult movements, I can see her becoming a Sanguinista in the coming weeks.

Tara is just the type of tragic character that Alan Ball excels at creating- someone so unhappy that she just wanted to die, who must now live forever. I'm still not sure if this makes me genuinely like Tara after all these years of her sucking the fun out of everything, but she's in a good place now.

Her scene bonding with Jessica was my favorite of the night, mainly because Deborah Ann Woll is a hidden gem and deserves to be a crazy successful movie star. She brings real chemistry in their conversation, something Paquin and Wesley were never able to find together. Jess gives her the "it gets better" speech and offers for them to be "girlfriends". She advises her that the urges she's feeling may seem wrong, but really, they're awesome.

As much as I loved this scene, it represents my biggest problem with True Blood as of late- the preachy, thinly-veiled analogies for all of the issues going on in the world. It's always been metaphorical, since the first title sequence where "God Hates Fangs" was displayed, but as of late Ball and co. have really been laying it on thick. Not only do we have the vampire/gay connection, but we also have the whole Sanguinista/fundamentalist Christian gimmick that I've found myself rolling my eyes at. People don't watch True Blood for the social, political and religious commentary, they watch it to see sex and violence and Anna Paquin's gap tooth. Just toning it down a hair would really do the show some good.

Things between Tara and Jessica fell apart fast once Jess discovered Tara and Hoyt going at it in the bathroom stall next to her. Hoyt tells Tara that "people change", but she doesn't buy it. Just cause he's got eyeliner on doesn't mean he's changed. Tara, however, is changed fundamentally, because she's no longer a "people". This sad fact doesn't bode well for Roman and his posse fighting for equality.

It doesn't look too good for Sam, as his attempts to reconcile with Luna were foiled by shapeshifter haters in Obama masks (again, more subtle political commentary) who shoot down Sam and Luna and nearly get her daughter, too. I'm sure Sam will be fine, but Luna took one to the gut, so I'd say the prognosis is negative for her.

Lastly, Lafayette tried to deal with his literal inner demon by smashing religious figurines and praying to Jesus (not the Catholic one, the dead gay Mexican one). All that did was give him and Tara's mom equally creeped-out dreams of a beheaded, mouth-bound Jesus wobbling around in distress. What does this mean? Lord knows.