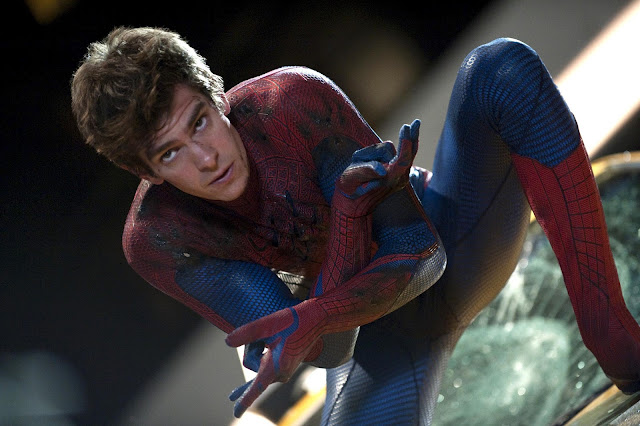 DA- Hold up! Wait. Look up at the movie marquee! It's a bird! It's a plane! Nope it's another Spider-Man movie! In hopes of making some more cash Sony is trying to pretend that none of us saw the Maguire-era Spider-Man films that were last on the screen five years ago. This time we have Andrew Garfield donning the skin tight suit in a reboot that I wish was the original "boot."

Directed by Marc Webb (yes the director of a Spider-Man film has web for a last name) starts off with a young Peter Parker of course being dropped off at the home of Aunt May (Sally Field) and Uncle Ben (Martin Sheen). We flash-forward years later to find Parker as the teenage photographer and science lover we all know about. After finding his father's mysterious briefcase he heads to Oscorp to try and find out more about his father from fellow scientist Dr. Curt Conners (Rhys Ifans). As you may have guessed he is then bitten by a radioactive spider, Uncle Ben is shot, he wants to find the guy who shot him, and yada yada yada.

Sound familiar? Well it should because of course this origin story is very similar to what audiences saw in Sam Raimi's Spider-Man in 2002. This is where the film suffers. The first hour is the same movie and there is no suspense when we know what is going to happen next. While there are subtle differences many of the same character types are still there. Gwen Stacy (Emma Stone) is Mary-Jane Watson. Spider-Man hating police captain George Stacy (Denis Leary) is J. Jonah Jameson. Even The Lizard (this film's big villain) is to some extent the Green Goblin (both green creatures created after a Oscorp chemical injection). He even has Dr. Jekyl/Mr. Hyde moments talking to himself very much like the Green Goblin did in the original.

However despite all these similarities once the film finally gets to become it's own movie it excels. Andrew Garfield handles the nerdy Peter Parker and wise-cracking Spider-Man much better than Tobey Maguire ever did. Not to mention the chemistry between Garfield and Stone is much more believable and this is probably is due to the director. Instead of having someone famous for horror movies direct a Spider-Man film, Sony turned to Webb who was fresh off of the dramedy 500 Days of Summer. What might have been a risky move to give the keys to this franchise to such a different type of director payed off greatly especially since the performances are really what saves this been-there-done-that plot.

In the end if a time machine was available and both of these versions were available back in 2002, I would choose Webb's take over Raimi's. While the plot is nearly the same in both films the great visuals and performances really make this version a better movie. Webb tries his best to create a new adventure for audiences and for people who can forget what they saw ten years ago, this adventure is nothing short of amazing. David's Grade: B+
Posted by Dual Redundancy at 2:22 PM