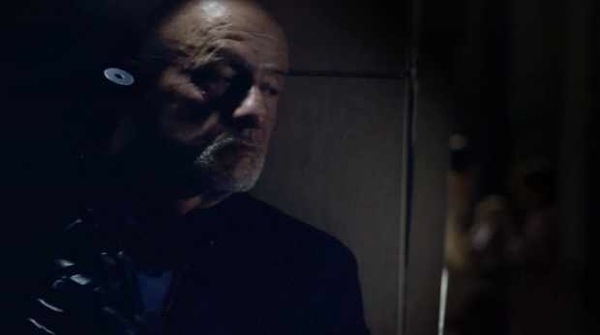 ML- Mike is the type of person who thrives in the shadows, never divulging too much information, always observing and reacting rather than actually acting. Getting an episode that almost entirely revolved around him tonight was a treat that helped set the stage as Walt, Jesse and Mike continue to "go forward" in Gus' absence.

Last week's episode needed to tie up the loose ends Walt and Jesse left behind in the lab, while this week put the players into position for the endgame. We got some perspective into the grand scheme of Gus' operations, and intimate looks into Walt and Skyler's current relationship and Mike's real duties. All in all, this was another great episode of television.

The episode is titled "Madrigal" after Madrigal Electromotive, the parent company of Los Pollos Hermanos and many other businesses headed by a man named Mr. Schuler. Mr. Schuler wasn't long for this world, however, once he realized the police were onto him and his illegal dealings. He calmly snuck into the washroom with the AED and electrocuted himself.

I noticed as he died that he landed face-down, and I wondered if perhaps the position the characters in this show die in has any meaning. The only ones I can think of that died face-up are Spooge, Jane and Gale, who were all (mostly) innocent in terms of Walt's treachery. Others, like Combo, Gus and Schuler died face-down. If someone would like to look into other Breaking Bad death scenes and see if there are any interesting patterns, I'd love to know what you find!

The loose end of the ricin cigarette was also finally tied up tonight, as Walt flushed the original and planted a salt-filled counterfeit inside Jesse's roomba. There's got to be some meaning here with Walt and cleanliness- he worked at a car wash, which gets rid of dirt. Tonight, he hid his dirty deed in a vacuum cleaner and cemented his plans with Mike while washing dishes. He's become a master of getting the dirt off of his hands.

After finding the planted cigarette, Jesse breaks down, so convincingly that I nearly made Aaron Paul my episode MVP for that scene alone. He beats up on himself, asking how he could be so stupid, and Walt tries to comfort him by massaging his shoulders. The force which he uses, however, only made me more tense watching it play out. One day Walt is going to slip up and spill everything to Jesse. My guess is Season 5 Episode 8, the mid-season cliff-hanger.

"Poppop" Mike was pulled from his regular life to talk with Walt and Jesse about starting business up again. He politely declined, calling Walt a ticking time-bomb and saying he had no intention being around for the "boom". Now that he has joined with Walt, I think Mike's fate has been sealed- he will in fact be around for that boom, and probably will suffer because of it.

I don't believe there are any coincidences on this show, and therefore I think it's fascinating how Hank has taken up the same walking style as Walter, Jr. after the accident. This signifies the connection between them as innocents and Walt's own disconnect from his son. Perhaps the only reason we ever see Walter, Jr. is while he's eating breakfast is because that's the only thing Walt can bond with him over. Their lives are so separate and different that breakfast is the only thing they share. Maybe.

Hank's boss takes the hit for mishandling the Fring case, and he admits that he spent so much time with Gus without ever realizing there was a drug lord right under his nose. This isn't meant to be subtle, and it's meant to show how blind Hank is- for now. He's absolutely going to catch on in the coming episodes, and I love that I have no idea how he'll handle that information.

Mike gets a visit from a woman in the diner, Lydia, who nervously asks him who killed Gus. She gives him a list of 11 names of people who could connect them both to the workings of Gus and Madrigal and urged him, in not so many words, to kill them. Mike declined, believing them all to be true to their word. She worried about someone named Chow, but Mike wasn't having any of it.

We were treated to a simple but profound shot of Walt rousing Skyler from bed without us getting a good look at either of their faces. The intimacy and emotion that the face conveys is absent, leaving us just with bodies going through motions, obviously with little true love for one another.

Mike runs into Chow before his own meeting with the DEA, and Chow seems nervous. Mike handles Hank perfectly and assumes the upper hand in the interrogation, and nearly leaves unscathed before Hank brings up the bank account with $2 million Gus had created for his granddaughter Kaylee. According to Hank, that money will all be gone unless Mike can give some information about Gus and the lab. Mike declines.

The three businessmen meet with Saul to discuss the next steps- Saul suggests no more RVs, and Jesse is upset, seeing as how the "Crystal Ship" was good for them. Their biggest problem is in precursor- getting the supplies to make the meth. According to Jesse, there's no methylamine on the market, which Walt doesn't believe. Saul is incredulous that they plan on cooking again- after a man wins $10 million in the lotto, he doesn't buy a ticket the next day. Walt counters by saying he hasn't won anything, he's $40,000 in debt. There's no stopping yet.

Mike and Kaylee play Hungry Hungry Hippos when Chow calls and asks him to come talk, all the while with a gun pointed to his head. Mike obliges, but is onto the assassin and fools him by putting one of Kaylee's gyrating toys against the peephole. Inside, Chow is dead, and Mike finds out that Lydia hired this guy to kill off the 11 names on the list for 10 grand each, plus 30 grand for Mike. Mike responds by shooting him, dead.

He hunts down Lydia and holds a gun to her head inside her house. She begs for her life, then not to let her daughter see her be shot in the head, then not to have her body removed so the girl doesn't think she abandoned her. Mike cannot bring himself to kill her, however, and instead uses her connections to get the methylamine for Walt's upcoming cook. He then calls Walt and says he's in and ready to move forward.

A happy Walt climbs into bed with Skyler, who doesn't want anything to do with him. He kisses her and acts romantic, explaining they do what they do for good reasons, and there's no better reason for family. It's clear Walt doesn't believe that anymore, but that doesn't mean it isn't true for others. Marie did as much as she could to help Hank recover; Jesse was great to Brock, despite him not being family. Walt is so blind that he thinks he's still acting in the family's best interests, when really, he can't do any more than serve them breakfast.