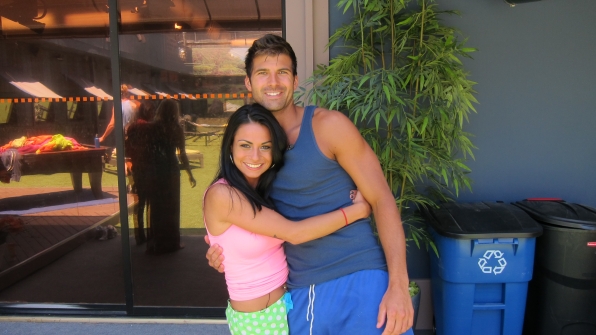 ML- I think everyone watching last night knew who was going to win that HoH competition. It didn't seem like the type of thing that could be rigged in anyone's favor, but everyone I talked to was certain that one person would walk away with the key to the bedroom, and sure enough, Shane proved them right.

He went from being in the dominant alliance to nominated to Veto holder to power again. He survived Danielle's revenge after Ian blabbed about his and JoJo's awkward semi-flirting in the Have Not room. He lost two allies this week, but gained some others with Frank and Boogie and will surely flip the house once again.

The eviction was a no-brainer, as JoJo did her best to show everyone how she fights with her heart, ya know? And she's just gotta be her, Staten Island all the way baby. That was my best JoJo impression, but Britney surely knocked that out of the guacamole with her own of JoJo's "I knows". Britney may be a mediocre coach but her diary rooms are pure gold.

We also got a visit from Dr. Will this week. Confession time: I've never seen a second of either of Dr. Will's seasons. I know, I know, I can't be a super fan without seeing the man who mastered this game, but I'm doing my best, you know? I'm too busy fighting my heart out. But really, I'll get around to BB2 and BBAS eventually.

From his totally unbiased opinion, he predicted good things for Boogie and ripped on Mr. Kermit Seacrest Dan for being blinded by boobies, Britney for letting her players get violent and Janie for... well, he didn't have much bad to say about her. She did enough trash talking on herself this week, between calling herself a lazy bitch and commenting on her large boobs, which apparently weigh more than "emancipated" Shane's head.

Now that Shane truly has been emancipated from the shackles of his position last week, what should he do? He's probably not going after Boogie's team or Danielle, so smart money says he puts up Wil and Joe. It'll be fun to see Team Janelle squirm a little bit!

How will this new "America's Vote" influence the game? If a coach turns down the shot to enter, will they stay or will they leave their players behind? Or will they even get a choice of deciding, with all the power going to "America". Will this eliminate Coaches Challenges from the game? Speaking of which, if Britney wins the CC this week, she has nobody to save with Shane as HoH, so can she solely hand out Have Nots? Or will she not be allowed to play? Or can she steal a player from another team? So many questions, but JoJo is still answering the first one with all of her heart.

Time for fake goodbyes! Hate me or love me, see ya'll next week and thanks for reading, you know?

No Live Feed reports this week! But it should be mentioned that Willie Hantz was arrested today for drunk driving. He's totally Jack Shepherding right now. Soon he'll be sporting a big ol' beard and yelling to JoJo "We have to go back!" And Kara will be Claire with a squirrel baby. The end.
Posted by Dual Redundancy at 8:35 PM