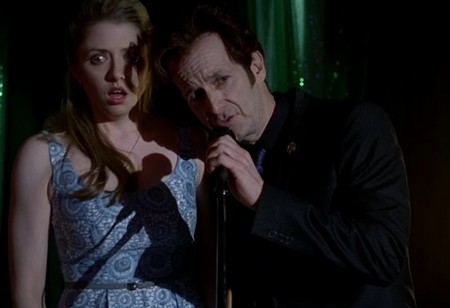 ML- In a night filled with flashbacks and callbacks to beloved characters from True Blood past, we were treated to the dramatic unveiling of Lilith, the vampire equivalent of Adam & Eve, who spouted from a drop of blood like a cross between the bad Terminator in T2 and a naked Aphrodite.

Her arrival was preceded by a V-induced mass-draining by Russell, Salome, Nora, Bill, Eric, Steve Newlin and the rest of the Authority members at a private party, which they hilariously crashed as Russell joined in singing "You Light Up My Life" onstage. Not many actors are able to handle the ridiculous twists and turns True Blood throws at them, but Denis O'Hare is always game and always delivers.

They got to that point when Roman's true betrayer was revealed to be, obviously, Salome. She then forced everyone to drink the blood of Lilith, which Eric believed would have no effect on a vampire. He was quite wrong, and joined in on the macabre draining. After seeing Lilith risen with his own eyes, Godric also appeared to him to tell him what he was doing was wrong and not to follow in Nora's footsteps. It's always great to see Eric and Godric interact, as the latter is the only one who really can reduce Eric to a vulnerable position.

The rest of the episode featured more plot lines than a full afternoon's worth of soap operas. Among them:

-Alcide trained with his #2 (read: wrestled a bit then started making out) until Martha interrupted them to complain about his upcoming battle with JD. She refused to believe he was on V, but later came around when JD offered some to young Emma.

-Lafayette confronted Don Bartolo, who strapped him to a bed, sewed his mouth shut and threatened to kill him, only to be stabbed himself by his creepy captive baby mama. Does this mean he'll stop being plagued by visits from Jesusito?

-Speaking of Jesus, we got to see a glimpse of Kevin Alejandro himself in Arlene's wedding video, which way too much time was spent on. I kept expecting to see a glimpse of something dark or foreshadowing, but there was nothing. I'm also unsure what purpose Holly serves in the story anymore. This show could easily trim a quarter of the characters in a bloodbath and still function fine, if not better.

-Terry and Patrick were taunted by the ifrit and expressed remorse over what they did. Terry threatened to shoot himself in the head, but Pat talked him down. This storyline really isn't doing much for me. I miss Terry as the random, Creed-from-The Office character who got a line or two every episode as comic relief.

-Andy visited former Sheriff Deerborne, who was a sight for sore eyes and provided some good laughs with his spiel about his experimental male enhancement ointment.

-Sam proved to be an expert detective by using his shifter sense to track down the Obama masks, then again smelling one of the shooters in the hospital. He also had a great scene with Sookie about how tired he is trying to change people's minds about things they don't understand. He reminded me of Batman in these scenes; the hero Bon Temps needs, but doesn't deserve. In this metaphor, I guess Tommy would be his Rachel and Luna his Commissioner Gordon, as she is all recovering in a hospital bed?

-Hoyt found acceptance with his hate group and joined them once they found out Junior had been killed by the crossbow last week. It may be all the coverage of the Colorado shootings I've seen this weekend, but this storyline has me uneasy.

-Speaking of uneasiness, Jessica was draining some guy when Jason showed up in need of a talk, and once he tasted the blood on her lips, the two became violent. She pushed him away and he shot her in the head, which had no effect on her, as it wasn't wooden. That was a very blunt example of domestic violence that she show glazed over, and I hope they come back to. If Jason is going to shoot a woman in the head, vampire or not, there should be consequences.

-Jason's troubles came from his talk with Sookie about their parents, as he explained he always felt guilty for their deaths, but now that Sookie actually had reason to feel responsible, he wouldn't let her go through that. What a good brother. Just a bad boyfriend.

-Sookie got her luminescence checked by the faeries, who detected that because she's only half faerie, she'd eventually run out of her powers and be normal. This was music to Sookie's ears, who, after flashing back to a mini-supercut of people like Bill and Mary Ann asking her "what are you?", began shooting blasts from her microwave fingers into the sky like lightening.

-In probably my favorite scene other than Russell's karaoke, Ruby Jean entered Fangtasia to find her vampire daughter dancing on the pole. She disowned her as a daughter, as a minister's wife can't have a vampire for a child. Tara hid her pain but showed it with Pam, who is, in effect, her new mother. When they hugged, it was a great moment for both Pam and Tara. Kristen Bauer von Stratten is really having a great season.

So what is that, 12 storylines? Most shows have an A, B and C story. Here we have A-L, most of which are completely unrelated. Thinking back to seasons 1 and 2, things were more structured, focused and connected. Some of them are working for me (Anything Pam/Tara, Russell, Jason/Jess) but many others aren't (Terry, Alcide, the Authority, even Lafayette). With Alan Ball departing after this season, I hope future executive producers can condense some stories, bring characters back together against common enemies and, if need be, provide some shocking exits for those who are expendable.