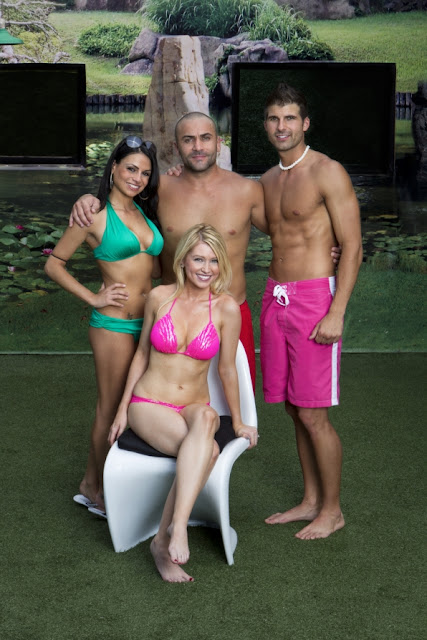 ML- It doesn't take long to go from hero to zero in the BB house, as Team Britney became well aware of this week. After losing Willie Hantz to his own self-destructive ego, and the subsequent HoH win by surviving nominee Frank, Shane, JoJo and Britney were right to be shaking in their giant tortilla costumes. But, as we saw last week, you're not out in Big Brother until you walk out that front door- and even then, sometimes you move back in.

It was clear who Frank would target, but the producers did their best to add some mystery by showing Boogie's scheme of backdooring Shane rather than putting him up upfront. That wasn't a bad plan, but had he been chosen for Veto and won and saved JoJo, Frank would be getting even more blood on his hands than was necessary this week.

JoJo pleaded her case as a loyal player, basically saying she was willing to abandon all of her previous alliances and join him. Swearing on her grandmother's life wasn't enough to convince Frank, who indeed nominated the remaining Team Brit members Shane and JoJo for eviction.

Britney did her best to coach them in the right direction, but I absolutely would not want to be in her position right now. Picking some of the stronger players totally backfired on her way too fast, and Willie quitting (and the producers not ending Frank's HoH reign right there, as they did to Michele when Chima quit in BB11, I believe) has screwed Shane and JoJo over even more. Sure, they should reintegrate, decrease game talk and be friendly, but in the end, the other contestants are going to do what's best for their games, not keep who they like better.

Boogie made another great suggestion to Frank this week: nurture relationships with Shane and JoJo. One of them at least will definitely be playing for next HoH, so you want to do as much damage control as possible. I think Frank and Boogie make a good team and really hope Frank can keep straight talking' his way through the game.

Danielle wanted to be chosen for PoV really badly, so of course the BB gods denied her and instead Ian, Ashley and Wil joined the others for a date at the Big Brother Cantina. The competition involved digging through thick, margarita-themed liquid for menu items to match them to a main menu, all while wearing a giant tortilla chip costume. Once you placed all of your menus in what you thought was the correct order, ring your bell to lock in your time. Whoever had the most right in the fastest time won the PoV.

The challenge made for entertaining TV, as Wil and Frank took plenty of tumbles and Ashley proved she's either dumber than the fish in the fish tank or working a smart strategic plan of playing dumb. Based on her challenge strategy (creating meaningless mnemonics of menu item first letters) and list of qualities in a good man ("likes to eat food" stood out for me), I'd say its the former.

In the end, Shane narrowly beat Ian in a real nail-biter, and Britney hugged him in the big vat of guacamole. He and Frank quickly solidified an alliance of sorts, a smart move for the short term to keep the power players off of each other's backs. He then planned to save Danielle from certain nomination by proposing to backdoor Wil and weaken Janie's team. Frank was hesitant, afraid to open that can of worms just yet.

Dan basically released Danielle from his coaching, as he saw his affiliation a kiss of death for Jodi and Kara before her. This reminded me of Eric and Pam on True Blood, except Pam is way cooler than Danielle, who cries way too much. This is actually smart for Dan- the weaker she appears, the more time she will spend in the house over the likes of JoJo, Shane, Frank, Wil, Joe and Ian. However, she's not making any friends by moping all the time.

At the Veto Ceremony, Shane did what he had to and saved himself, and Frank did what he had to and nominated Danielle. All of the three nominees were those who voted for him to leave, and therefore he made no new enemies by putting them up. He also secured a deal with Shane thanks to Boogie's nudging. I'd say his HoH week is going a lot smoother than Willie's.

Tomorrow night, either Team Britney will be down to one member or Dan will follow Danielle out of the house. And another HoH competition will shift things up once again (I hope, as this week has been too safe. Good gameplay, bad TV).

LIVE FEED SPOILERS AHEAD!
Nothing major to report after last week's craziness. It looks as though JoJo will be departing tomorrow night without putting up much of a fight, thanks to Britney coaching her to lay low. Ashley has made lots of alliances with lots of people and it seems like most of them trust her. Could backfire later, but for now she's in a good position. If Shane wins HoH he wants to target Wil and Joe from Team Janelle.

Posted by Dual Redundancy at 8:28 PM