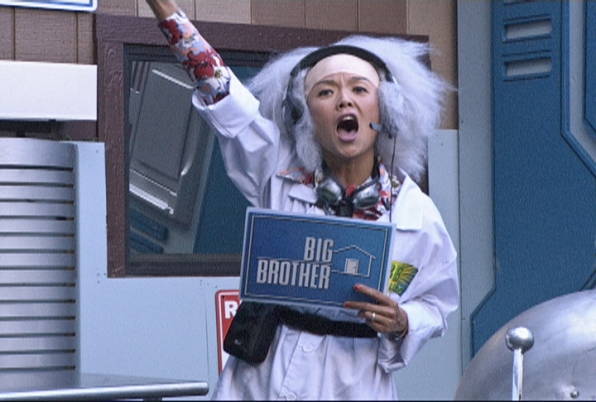 DA- Before you choke on your own saliva or have your chest pop out and die, don’t worry! Your weekly Big Brother recaps are back! Finally, after weeks trapped inside of the Big Brother have-not room eating slop and having to press a button every nine minutes, I have escaped to make sure you know everything that has been going on.

To rewind what we missed Helen and Judd win HOH and end up getting Jeremy and Kaitlin out of the house during their respective weeks. GinaMarie kept crying over Nick, McCrae is delivering “more pizzas” to Amanda, Andy is completely invisible, and the houseguests are still racist. Yada, yada, yada.

However, the biggest shocker of the last few weeks was when America became the MVP. Somehow after three weeks of Elissa winning fan favorite she became the person America wanted on the block! While it is hard to exactly nail down how or why, here is my theory. The majority of America’s vote was for Aaryn. However, since she was nominated the votes went to the next highest houseguest. An educated guess would mean someone in Aaryn’s group like Kaitlin and GinaMarie but since Kaitlin was already on the block the vote must go to the third highest vote. Now this is where it gets interesting. While some believe this small vote could be Elissa haters it very well could be Elissa supporters who were confused by how that week’s MVP twist was going to work. Perhaps when it was announced on the east coast and voting opened, Elissa fans jumped to the polls like they do every week to vote. We are people of habit and sometimes habits can lead to disastrous results after too much of a good thing. Wow! Talk about getting deep.

But now since that is covered let’s jump to week five! In true Big Brother fashion the person that needed to win HOH wins all the power (with a perfect score mind you). However, it will not be a free ride for Aaryn. The only reason she got off of the block was a promise to Helen that if she won she would let her choose the nominees. I bet Aaryn did not bet that would happen! But before we can see if she will keep her word we are treated to some network product placement a have-not competition based on the memory powers of Detective Carrie Wells on CBS’ Unforgettable (airing Sunday nights at 9 only on CBS!)

At first when I heard the siren to cue this challenge I thought we were going to get some Zingbot 3000 action but since we did not I am going to skip the challenge and do some zingers of my own. Andy is excited to see Poppy Montgomery introduce the challenge on the screen because he knows her “because she is on TV and is a ginger.” That’s it? Not very Unforgettable! ZING! Judd using the cliché “Female Body Inspector” FBI line during the competition? Yeah, sure Judd. Tell me about Jessie’s body then…oh wait! ZING!

After Howard and Spencer are put on the block, Howard decides to call a house meeting. While I was hoping for a “Dan’s funeral” I instead got someone burying his own grave. By talking in circles and looking directly at the people he is talking to (like a normal person should do) he scares most of the house that he is coming after them. Meanwhile Howard has no idea since he tells the diary room that the message has been delivered and received! Howard, you may want to check to see if they receive the right package then.

After Amanda is chosen as this week’s MVP by America (probably because Aaryn is HOH and Amanda has not been so innocent herself) McCrae is pissed. He is sure Howard is the MVP, so much so in fact, he is willing to put his life on it and bet a “bajillon kajillon” dollars. Yikes McCrae I am not even sure how many pizzas you need to deliver to get that much back!

For this week’s veto competition it was as though the producers chose this one for me. Helen dressed nearly like Doc Brown and proclaims that they all must travel back to the future to the past to find the first veto after it was destroyed in the present day. Even though the houseguests claimed the backyard transformed around them as they traveled it was clear that they were inside and then the actual competition was outside. After Spencer wins all the houseguests travel back to congratulate him (even though it would make a lot more sense if the players traveled to rejoin the rest of the houseguests in the present day but this is Big Brother so logic is thrown out of the window). Since Spencer won and took himself off it should come to no surprise that Aaryn nominates Candice as a replacement nom. No really! Those are her words, not mine. She actually said “this won’t be a surprise.” Come on Aaryn, really?

Spencer then tries to make sure Howard stays by targeting Amanda but when confronted by Amanda in the backyard Spencer says he is actually going after Candice. Both engage in some profane words that will not be posted here but Spencer does use a word that rhymes with "Schmidt." What really angers Amanda? Being told to do something that rhymes with “but dup.” Oh no, he didn’t!

Helen who is jogging as this is going on decides to start some trouble and tell Candice that Spencer is really after her. Candice, of course he is going to tell that to Amanda when his target is Amanda! However, we are treated to another house meeting where Candice calls out Spencer and asks if he ever said he hopes Amanda’s “boob pops out and dies” and that she “chokes on her own saliva.”  In the end this works against Candice. Not only does she prove Spencer does not like Amanda but she also scares GinaMarie, Aaryn, and Jessie to think about getting her out now instead.

Before we could vote we have to update the houseguests about the births of Tilly Godwin, North West, and George Louis Alexander in a stupid pop culture quiz. Now it is time to vote…but first let us watch a package of Judd’s hometown watching Big Brother. While I did find this a little absurd it is nice to see so many passionate Big Brother fans out there. To see Judd on TV for them is “the biggest thing since electricity.” But my question was why him? I guess they will not want to do any of the nominees since it may show favoritism or who may go home. They also already did a package on Amanda and McCrae last week. They definitely do not want to celebrate Aaryn, Spencer, and GinaMarie for their comments so that leaves people like Jessie, Andy, Helen, and Elisa. Yeah. I guess Judd was the best choice.

In the end it is Howard who is sent home after a 7-1-0 vote (Spencer voted to evict Candice out). Again a third nominee with zero votes. Can we all agree that this is not working? With three nominees and a MVP twist to get rid of floaters it seems like the entire house is now just full of them is season. Floaters 1. Big Brother 0.

- It looks like when they time traveled back from the veto competition they are stuck back in February of 2013. Why you may ask? Because the houseguests are spending their time making Harlem Shake videos.

- For some odd reason we are treated to a package of Andy walking out to the hammock only to be startled by a bird. Talk about a slow news week.

- I noticed this week that Aaryn’s lower third reads “College Student.” Does anybody know if it said anything else before she lost her job due to her remarks?

- Speaking of Aaryn, here are some quotes that because of her history could easily be taken in the wrong direction.

“I know what it is like to be in the minority…of the house!”
“Candice is the cause of every terrible thing I have been through.”

Really Aaryn? If you think that now wait until you get out of the house.

Are you sad to see Howard go home? Should Candice or Amanda have gone in his place? Who will win the HOH endurance competition? But first, who is going to watch CBS’ Unforgettable Sunday nights at 9 only on CBS? (Can we get our money now?) Let me know in the comments or @eastwoodmcfly.
Posted by Dual Redundancy at 12:26 PM