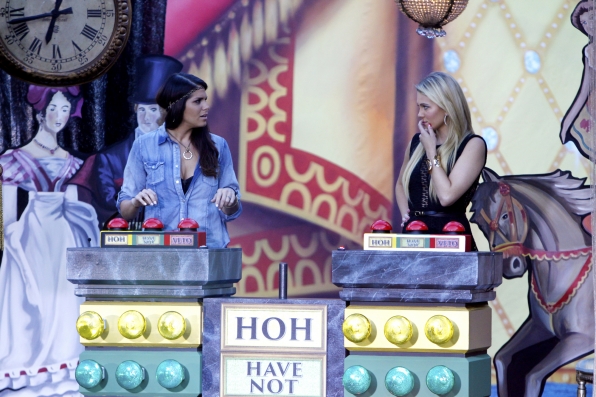 DA- Boy do we have a lot to cover. Even though there has been a lack of shake-ups or power shifts this season, there is still a lot of drama inside the Big Brother house. Much like the season and the lack of explosions we have seen this drama is often drama for just the sake of it. What do I mean? Read on…

We have to go all the way back to when Candice was voted out last week to see how GinaMarie was somehow even more rude then we thought she was. While I thought it could not get any worse than saying to someone who was adopted “at least my mom likes me” GinaMarie tops herself by saying Candice’s mom “doesn’t even want her.” Candice on the other hand does not get off Scott-free. She does take a crack at GinaMarie’s color contacts, how she still lives with her parents, and her eating disorder. While Candice leaves, the house is stuck with GinaMarie and Aaryn is worried that GinaMarie’s actions will hurt her game and make her look bad. Oh, honey!

On a much sadder note it was painful to see Judd pleading for his safety during the deleted scenes from last week’s double eviction episode. What’s even sadder? He left because people thought he was the stupid MVP. It is just another stupid twist ruining the game for somebody else. I would link to an example but where do I begin? Eric Stein being forced to do America’s actions as America’s player and thus not being able to play his own game? Big Brother 13’s Pandora’s box which reinstated the duos twist for just the week that the HoH was targeting production favorites’ Rachel and Jordan? The list goes on and on.

But we have to move on and it is time to see some action. Andy is ready. He would love to “win so people know [he] is here to play.” Hey week seven is a perfect time as any to start. Andy is true to his word and wins a HOH competition where the goal is to land a cherry ball into a very small container at the end of a moveable banana board. While everyone loves that Andy has won because he is friends with everybody (which was perfectly shown by an edited package of diary room confessions) this could be disastrous for future weeks. Now Andy has to actually choose a side instead of playing both of them unless he takes the easy way out and just puts up someone like Jessie up. This is Andy after all so I won’t be surprised if he does just that.

The big drama however is between McCranda, Amancrea, or whatever everyone is calling McCrae and Amanda. During the competition Amanda has a diary room confession saying how she hopes McCrae lets her win or they are banana-splitting up. That’s funny. Too bad you can’t laugh at your joke when he actually doesn’t let you win. She cries and complains that Jeff threw it for Jordan and Brendon threw it for Rachel! McCrae however did not want people to think he was being controlled. Shut up Amanda! Not only does whining make you look terrible but if McCrae wants to win HOH and get all the blood on his hands (leaving you without getting anyone mad) let him! But Amanda hopes this outburst doesn’t “draw attention” to her. Did Big Brother just cast at an elementary school this year? In the end Amanda can dry her tears because it is Spencer and Jessie on the block this week.

For some reason everyone wants Jessie out instead of a real threat like the two power couples (Helen/Elissa and McCrae/Amanda). Every week the “big threat” is someone like Candice, Judd, or Jessie. Am I missing something here? How about Aaryn who keeps winning challenges? But hey what do I know!

Helen unfortunately buys it but to make sure the sale doesn’t get returned they all decide to throw the veto competition so Helen wins. Even though she could easily change the nominations and put Amanda up they are hoping this bargaining chip establishes trust for the group. But how can you throw a competition you don’t even know is coming? Well somehow every contestant figures out the exact type of challenge before it happens. Since it is a counting challenge they all decide to fold so it would only be between Jessie and Helen. However after counting nearly 468 bats in the first round and other random objects Jessie is throwing it too! Helen has racked up two tickets and only needs one more.

Spencer is worried though. He is on the block after all, so for some reason he starts trying in round three and actually eliminates Helen in the process. In the end it is between Andy, Spencer, and Elissa. Well actually Elissa is not even in contention after she folds in the last round, which makes no sense. You only fold if you are not sure of the guess so you can go to the next round and try again. But if it is the last round and everyone is tied you try and guess anyways because you have a 1 in 3 shot to win! Andy wins and even though Spencer gives a convincing argument during the veto ceremony (Andy “you haven’t done anything intelligent all week so why start now?”) both nominees stay on the block.

Jessie is paranoid that she is just being told she is not the real target and she is right. In a last ditch effort she tries to tell how Helen did consider trying to backstab Amanda and asked Jessie to get on board. Helen doesn’t remember saying this but thankfully the editors of Big Brother do and have the clip to prove it! Unfortunately this move does not work for Jessie and she overhears the group discussing how she is going home. Jessie is done with everyone now and that includes Andy so don’t bother trying to comfort her now buddy! He asks what she heard and Jessie (smartly) replies you tell me what you think I heard (just in case there is more to the story she didn’t hear to begin with).

But before Jessie goes home she starts up some of the most confusing drama this season of Big Brother has seen! She tells GinaMarie that Aaryn talks about her all the time. Later GinaMarie tells Aaryn just but since there are no specifics this is not considered rude to her. Aaryn says just by saying that to begin with is completely rude! Thus begins a fight over if saying that someone talks behind someone’s back is rude or not. Keep in mind this is not a fight over what was actually said! GinaMarie wakes everyone up to settle this argument that does not involve anyone else by yelling to everyone that Aaryn is “yelling” at her. Talk about irony!

Despite this new conflict it is still Jessie that goes home in ANOTHER unanimous vote. As soon she exits the door we are treated to an HOH competition where contestants have to buzz in with the answer of what type of competition it was after hearing a poorly made song with lyrics about the event. After some anxious houseguests hitting their button over and over they realize that Big Brother went to all this trouble making the songs and by golly we are going to hear them in their entirety.

After McCrae clearly throws it to Amanda this week, Aaryn wins her third HOH in a row? What’s that Aaryn? I pulled a Julie and did not get my facts right? Your fourth HOH?! Wow and including your veto win that means you have won five competitions this season! How come nobody else sees you as a threat yet Jessie who only won a veto by default and Candice who never won a challenge had to go home sooner?

Next week Julie teases that production is going to intervene and allow a juror to reenter the house by a competition. While this will allow floaters like Judd, Candice, and Jessie to re-enter, I think the person to watch for will be whoever gets evicted this week because if it is a power player like Amanda and Helen, the sparks are going to fly!

- Editors, can you please go back to choosing interesting quotes to start the episode with? This used to be my favorite part and now we are treated to a sobbing Andy hugging McCrae, McCrae jumping on to a table, or Andy being attacked by a bird. Give me a good old-fashioned zing!

- While normally Julie likes to update the houseguests on celebrity births, this week Julie asks a hard-hitting question from a complete nobody on Twitter. How come there haven’t been any big moves this season? Oh burn! How much do you want to bet it was one of the producers tweeting this in trying to get the houseguests to actually play the game?

- Why does everyone celebrate after seeing someone they are targeting be eliminated from the veto competition? I understand you are happy but you are trying to trick Jessie that she is safe and is a pawn. Stop smiling and celebrating when she is eliminated! If I was her I would glance at the audience during the competition to see people’s real reactions so I knew my accurate fate.

- There is a mini-controversy over Amanda and Aaryn’s use of adderall in the house. While it is supposedly used for their ADHD many see this mini-version of speed an advantage in the challenges. Even though Amanda has not won a competition this season, Aaryn is dominating the field. But who are the two people most upset about this? Amanda and Aaryn. Both think the other is faking and doesn’t need it like they themselves actually do. Ahh, this is the drama we expect don’t we?

Who do you want to see re-enter the house? Who do you think Aaryn will nominate for eviction? But first, are you like Spencer and feel like a candy bar at a fat camp with everyone around licking their lips? Let me know in the comments below or @eastwoodmcfly!

Posted by Dual Redundancy at 5:48 PM