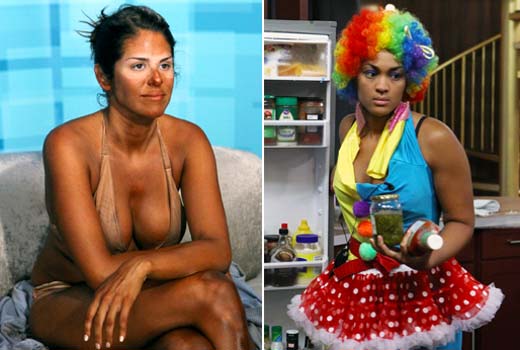 DA- OMG BBVX this weeks been crazy!!! We both have like two weeks of BB in one. that’s like double the game in what normally would have like one week’s time. you know what I mean?!

Okay, I can’t do this anymore. I was going to write this entire post in the style of GinaMarie’s amazing work of literature but not even Nick would read past those few sentences. However, GinaMarie is right. We do have a lot to cover so without further ado…

When we last left our “friends” they were on top of a giant log working for the coveted HOH. After some weird bargaining between McCrae and GinaMarie that included three nights in the HOH bed (we know why you want that McCrae), both choosing a nominee or even choosing both, GinaMarie and her will to receive hair dye helped her prevail to victory! But the other houseguests did not go home empty handed. Helen gets to throw a BBQ for three friends, which surprisingly includes Aaryn, Candice receives $5000, and Spencer must speak through a bullhorn at all times. This way we can hear his inappropriate jokes much more easily.

After Jessie’s hissy fit over not being able to go to the BBQ and Andy spilling the beans and ruining yet another plan, we get a great fight between Amanda and Jessie. It all started after Jessie told Andy in confidence about wanting to get Amanda out instead of Howard last week. McCrae defends Andy and says he did not tell anyone but obviously he did if they are having this discussion. But Amanda does not care because she sees Jessie as just an attention seeker. Ultimately Jessie is the one to point out Amanda is the one walking around in her underwear!

Much like her HOH blog, GinaMarie’s nomination ceremony is a series of words with no real connection or reason why they are being emitted from her brain. This makes many of the houseguests laugh. In the end we can figure out that she nominated Jessie and Candice, at least I think that is what she said.

Amanda is put up again as America’s MVP vote and she does not believe America could ever be MVP because she is making it her mission to get the mean people out. Ironically Spencer says maybe she is doing things people do not like in which makes Amanda retort, “what am I doing people don’t like?” To make things even worse for Amanda after she asks McCrae to come and sit with her and he says no, she runs away to be alone under the covers in bed. Why did she ask him to move? Because Jessie came in and sat next to him. How is it that a 23-year-old pizza boy is more mature than a 28-year-old real estate agent?

But before she enters a downward spiral and starts worshipping McCrae’s bandana à la GinaMarie with Nick’s hat, it is time to the veto competition. This week we are throwing frogs in a pond for a challenge that looks like it was filmed in Judd’s backyard. Jessie winning the veto in this classic Yankee swap challenge is not even the big takeaway of the event. Candice, who tries whispering to Judd that they think he is the MVP, begins to be attacked by Amanda who tells her to shut her mouth. The tension escalates and includes Amanda calling her “Shaniqua” and asking “am I racist now?” Candice tries ignoring it but as soon as she says a word over Amanda’s taunts Amanda asks why she is still talking to her? Is it possible to send Amanda back to high school?

Even though Judd wins the competition he opts for the $5000 instead of the veto, which Jessie ultimately wins. Meanwhile GinaMarie gets a cone of shame, Spencer wins a trip to the Bahamas, and Amanda has to get a spray tan every few hours (much to the probable displeasure of GinaMarie who would see this punishment as a great reward).

After Jessie takes herself off the block Spencer is put on but nobody seems worried. Each houseguest thinks the other two are bigger threats. But come Thursday night it is clear it is Candice who has the biggest target on her “clownitard” back. Despite one last-ditch effort by Jessie that involves getting rid of Amanda, which includes Judd finally getting his kiss from her, unfortunately it is Candice’s turn to return home.

But before Candice is voted out in a unanimous vote, a verbal fight breaks out between GinaMarie and Candice, which continues as she walks out the door. Candice as she leaves tells GinaMarie to go back home to live with her mom. GinaMarie’s comeback? “At least my mom likes me unlike yours.” As fellow reader Dan B. pointed out this is a stab at Candice for being adopted. How is it nearly 90% of the house this season is filled with some of the meanest people found in this country? This is a game show for crying out loud!

While normally this would be it for this week due to the double eviction we were treated to an entire week in one night. Immediately after Candice’s eviction the houseguests are put to the test about their knowledge of events in the house. Thankfully unlike the conveyor belt challenge of week two, production showed us pictures to at least allow some viewers to play at home. After Julie’s antsy comments about the houseguests flip-flopping their answers, Aaryn wins the HOH title for the third time this season.

Aaryn, who only had a few moments and a commercial break to make up her mind, ends up choosing Spencer and Jessie. Before we can process why the veto competition is off and running. In this competition houseguests have to put certain shaped nails in holes around a veto diagram. Out of nowhere Aaryn takes yet another competition. Surprisingly she takes Jessie off and puts Judd up.

No! Not Judd. Sure he is not the smartest player or even a good player but at least he is somebody people can like. This season every single week I am left with less and less people that I can actually stand to watch. Please don’t get backdoored!

Aaryn tells the house she has no choice with this decision and all but two wanted this. If she didn’t do this she would be going home. While this seems like a cop out this may be a smart move. At the end of the day she is not getting any blood on her hands. However, in the end she may not be able to take credit for these big moves if she is just a puppet with other people’s hands up her…well you know.

As they all vote many start crying and saying how they do not want to vote Judd out. Hmm, here is an idea. If you don’t want him to leave…don’t vote him out! While we are not seeing it this week (we will probably see more footage during next Sunday’s broadcast) Amanda probably wanted Judd to go thinking he was the MVP putting her up. Turns out America just ruined the game for another houseguest due to another stupid twist.

Speaking of twists, Julie announces the MVP twist is over (hallelujah!) but that the jury may still be involved in the rest of the game. First off, I did not like Julie telling the houseguests before both votes that the jury is going to be starting early (it may change some last minute votes or decisions). On Survivor host Jeff Probst surprises the houseguests by announcing the jury starting as he reads the last deciding vote. Secondly, what could this jury influence be? At first I thought maybe the latest person voted out chooses the third nominee. Now I believe a houseguest is coming back in to the house. Even though this season is already long and much larger than normal seasons, there are clues that the jury may be staying sequestered to come back. First, Julie is not able to update the evicted houseguests on the game or any twists. Also podcasters and reporters like Rob Cesternino are not even allowed to ask any even written questions to anybody voted out after this point. What power will the jury have? As usual we need to expect the unexpected…

- GinaMarie kisses Nick’s photo on the wall after her HOH win. She also prominently displays his blue hat during the live eviction and cherishes her new picture of both of them she received when she won HOH. Nick, I would be very worried the second your friend exits this house. Know any good lawyers/security guards/witness protection programs?

- Judd unfortunately goes home without any of his stuff from the house. What’s the bright side? He is at least wearing his prized grizzly bear shirt, which every single houseguest has worn this season. Can you imagine if that was left inside the house with these crazy girls? Jessie may even join GinaMarie with her shrine!

After two crazy weeks in one I am off to a relaxing BBQ (if I am invited to one that is)! Are you said to see either Candice or Judd to go home? Did you see Judd’s backdoor coming? But first, what would you rather have? The cone of shame, a fifty shades of orange spray tan, or the clownitard? I know it is tempting but you can only get one. Let me know in the comments or @eastwoodmcfly!
Posted by Dual Redundancy at 9:09 PM