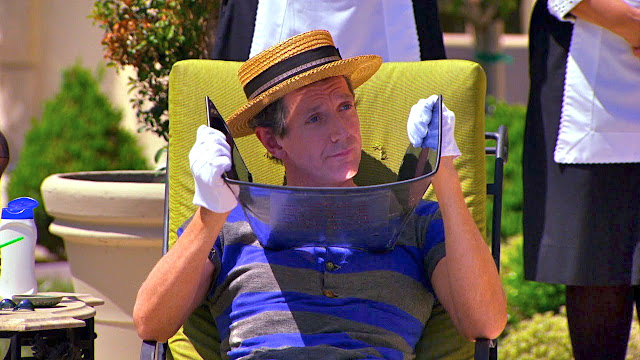 DA- I hope I am not crashing your party tonight with my weekly Whodunnit? review but there has been another murder in Rue Manor and I need a trained monkey you to help me solve how exactly Geno got crushed by a chandelier. Before you say Geno was simply crushed by a chandelier stop monkeying around and let’s get started!

Even though I could have sworn last week that it was bright and right after dinner when they previewed Geno’s death it seems like this week it takes place precisely at midnight. Because nobody works well in the middle of the night (except for whoever just killed poor Geno) Giles tells everyone to go to sleep to rest up for the most complicated investigation yet.

The next morning Giles has them choose where they want to explore this week and he wants them to hurry and pick so he can rest. Hey, you just woke up! If you were actually doing your job instead of sleeping or tanning for the entire episode maybe you could be stopping every single one of your houseguests from dying!

As Ronnie focuses on the dance floor and belittles Kam for taking the time to search around the room (and finding a timer), Melina and Cris are in the morgue answering cell phones found inside Geno’s pants. Man is Giles mad that his cell phone was missing. After he yells at both of them for finding the phone, Cris and Melina tell them they found it in Geno’s pocket in the morgue. This leads Giles to ask “my phone is in Geno’s pocket in the morgue?” Yes! Talk about being redundant! (You see what I did there?) Maybe you should go and rest up Giles…

Before Giles can go back to sunbathing he leads the blindfolded investigators to a pitch-black room where they must find a clue after they find the night vision goggles of course. Ronnie is the first to make it to the morgue to start rearranging a bees beads puzzle with Cris, Lindsey, and Kam hot on his tail. (Meanwhile Melina is literally and figuratively in the dark). They all end up in the morgue and when Melina begins to help Ronnie with his beads and sees Kam trying to look on, she is not happy.  “Be a man and get your own beads!” Umm…Melina I don’t want to sound mean but maybe you should take your own advice and get your own too.

Despite Ronnie’s early lead Kam solves the riddle first, which involved locating a pair of monkey statues after the beads spelt out “hear no evil.” Between this and an earlier clue saying “monkey see, monkey do” Ronnie is lead to believe a trained monkey not only dropped the chandelier but used the gun to shoot Geno in the belly. And that ladies and gentlemen is a certified bounty hunter working alongside us everyday. This guy has been a detective for 17 years and he thinks a trained monkey is working with the killer this week based on the saying “monkey see, monkey do.” Speaking of this is it also weird that an attorney, ex-homicide detective, and a television crime reporter have also failed to piece together a fake crime on a network summer television show. These people are solving our nation’s crimes in real life. Yikes!

This week Lindsey, who got to hear what happened in the other two rooms and was the only one to visit the last known whereabouts, had the best theory. She figured out that the killer had two plans. First, the killer was going to strangle Geno with a nutshell lei that had fluorescent green paint on it. But when Geno decided not to wear it, he/she had to go to plan B. When the lights went out with the timer at midnight, the killer put on the night vision goggles and shot Geno in his stomach. With the help of the illuminated crest on the floor he/she dragged the body to the center and dropped the chandelier on him before hiding the goggles in the drawer. Somehow this was all accomplished in the fraction of the second when the lights went out.

Since they did not have any information from the riddle and because Ronnie thought it was a monkey (I’m not going to let this go), both him and Melina were “scared” this week. Before Ronnie heads to bed he checks the room for bobby traps. Yeah, good luck buddy! Meanwhile Melina starts crying and wants a hug. How old is Melina? It’s just a game here guys! Don’t go all bananas or anything!

Both end up making it to morning and to celebrate it’s a spa day! Everyone gets a fun relaxing spa activity except for Kris, who has to do yoga (which believe me is more work then play). While I thought Melina was going to suffer from some sort of asphyxiation like the secretary in Goldfinger thanks to her facial, it was Ronnie who dies after some sort of exploding hot tub. Now how exactly did this happen? Is the hot tub a time machine? Were there any monkeys involved? All these questions will be answered next week on Whodunnit?

- Kris knows how to shoot a gun because her father was a cop and taught her at a young age how to handle it because she may find guns just lying around I guess. I am not telling Kris’ dad how to raise his kids but perhaps you may want to invest in a gun cabinet and a good lock. But hey that’s just me!

- Why did the killer choose Geno? He/she asked him to steal Giles’ cell phone and in return he will be safe. So he does and this “dishonesty” is another reason why he must go? Wait, what? First off you already planned on killing him and secondly you told him in order not to die he must do what you asked. If I was the killer I would be angrier if he didn’t follow my orders. Besides why are you looking for a motive now anyways? You never needed one before.

- Kris at the end is the only one unsupervised at the spa day (except for the now eliminated Ronnie). While she does yoga alone the other houseguests had people tending to them like Kam with his massage and others with the pedicures. This would make it pretty easy to sneak out for a little hot tub fun…

- If Melina survives next week and she does not solve the riddle it could mean she is the killer. This week she was “scared” after only getting to hear what happened in two rooms and next week she is only going to get one third of the story while Kam’s team may get 100% (provided they all work together). If she does survive with only 33% of the story while others die with even more information it is safe to say she is the mastermind behind this whole season. Yes you heard me right. I am talking about Melina!

With only two weeks left who do you think is the killer? Did Ronnie deserve to die? Most importantly if there was not a trained monkey, who has been eating all my bananas? Let me know in the comments below or @eastwoodmcfly!
Posted by Dual Redundancy at 10:32 PM