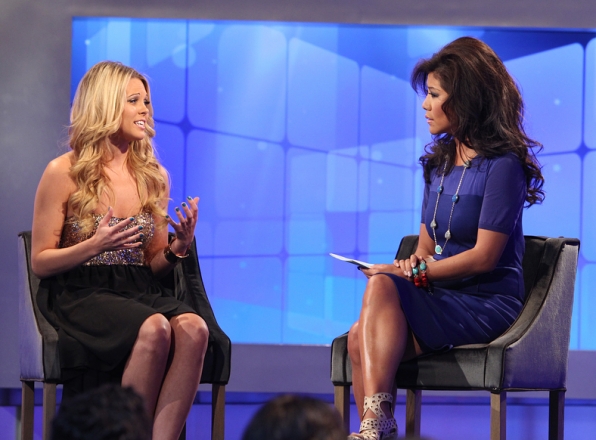 DA- Look up in the sky! It’s a bird! It’s a plane! No, it is Glee star Matthew Morrison in the audience! What was Mr. Schuester doing in the studio audience for a reality show on CBS? I try to piece it all together in another crazy week of Big Brother!

We begin this week right off where we did last week. After the houseguests and jurors are done being pelted by baseballs, we have a new HOH and a returning juror! But before I announce who won what, let’s look at some strange moments from an odd HOH challenge. First, what was the point of the dancing mascots that ran across and then quickly left? Secondly, I’m glad Jessie got to show Amanda she is not scared of her. As soon as she was eliminated and as she runs out with her back to her she yells how she hates her. Yeah that will show her! Finally, Elissa’s recoveries would not have worked on Survivor. She was hanging off of the ball holder, sitting on the platform, and probably doing downward dog on Nick’s hat that GinaMarie has on her 24/7. Despite all these close calls Elissa wins the HOH key and the world gets to see J-U-double D re-enter the Big Brother house with his famous bear shirt.

Despite a clear power couple controlling the game it looks like Elissa’s biggest target is Aaryn. While she is a beast in challenges it seems like this is more of a personal move than a game move. For me it is clear when she tells her during the nomination ceremony that Aaryn has made her life terrible so now she will know how she felt.

This week it looks like Judd is ready to make amends and give everyone a clean slate including Elissa, who he thinks was working with Helen to get him out. But Judd does not want to stay clean for long. A day later he is ready to get his hands dirty with a backdoor. Not to mention a few days after that he teams up with GinaMarie, Andy, and Spencer (leaving Elissa on the outs) but we will get to that.

Sorry Judd but the person I was most excited to see return to the Big Brother house this week was not Mr. Party Daugherty it was the Zingbot! This year we got some good ones after Elissa first tries a terrible zing herself to the insulting robot. Hey Elissa, let’s leave the zings to the professionals shall we? To sum up McCrae always wear shorts because Amanda wears the pants in the relationship and Andy is like a ghost because of how much of a floater he is (which actually scares Andy into possibly shaking up his game now). GinaMarie meanwhile is on the table slapping it like she has never heard of comedy before. Man, she is going to die once she sees an episode of Two and a Half Men! Her zing involves comparing her “relationship” with Nick to Fatal Attraction. But don’t worry, GinaMarie assures us she would never harm Nick unless he was married. He isn’t married but I am not sure he is staying completely free this summer.

For this week’s veto it is Baby Zingbot’s first birthday so they have to roll a ball back and forth to reach 250 power units. If the ball falls they start back at zero. 250 power units? Whatever happened to kids wanting candy and slinkys? Why does the veto involve getting power units for a robot’s birthday? Probably the same reason why a beaver is crying over love letters?

As luck would have it Amanda wins! Elissa for some reason tries to joke around saying they threw it, which sparks a forest fire inside the Big Brother house. Amanda calls her “bitchy” and says how Rachel would be so proud that she wasted her HOH. She then proceeds to call her “trash” at the veto ceremony and how next week she will be out of the HOH room and back with the “scum” downstairs. It looks like we know who is going to win fan favorite don’t we? Amanda, if GinaMarie even thinks you are a “crazy bitch” settle down!

But unfortunately Amanda is not reading this and keeps going. She starts picking on her face and becomes angry that she (excuse her language) looks like “the bully when this bitch ass, Joker faced, motherf-cker walks around like she's Queen Sheba.” Please reread that sentence to understand the irony spewing out of it with every word. While Amanda has said some terrible things Elissa is not a perfect angel. Even though we have not see it on the show some live feed watchers have claimed that Elissa fired back and called her out for having an abortion and not a miscarriage (as she claims) to be on Big Brother this season. Either way congrats Big Brother Casting! You have found the most vial and disgusting houseguests ever in reality television.

Because CBS does not want to show any more hurtful events in the house, we are treated to two packages this week where Dan Gheesling plugs his web show tells us his thoughts on the game and how three Big Brother showmances are doing in the real world. However, the big event of the live eviction night made Twitter buzz for days!

As it turns out Twitter was going nuts over the dirty bedroom and after ten weeks of not getting a question (as Spencer points out) he explains the complex situation. Glad that is settled. Who was tweeting in these stupid complaints? Their moms?

No, the real important event of the episode was how Julie was going to handle the eviction of Aaryn and if she would bring up the comments she made earlier in the game. The question is soon answered and Julie reads back some of her comments to the booing and laughs of the Jerry Springer Big Brother audience. Meanwhile Aaryn is struggling to find a response. While I completely agree that what Aaryn said was tasteless, rude, and disgusting, I had a few problems with this segment. For one, many people claimed Aaryn was obviously lying that she could not remember saying these things. Well if these remarks just naturally come out of her, I believe her. How is she going to remember three or four sentences over 70 days? Can you remember something rude you said over two months ago? Next, how much do you want to bet she will be the only one this season to be on trial for her actions? Meanwhile the stuff GinaMarie, Spencer, Amanda, and even Elissa have said will be brushed away because it has been nearly absent on the show. So they get to walk off for the most part Scott-free (with the majority of the American audience) but Aaryn will always be remembered as a racist super villain? Finally, Aaryn now knows something is up. She has no idea how much trouble she may be in and what is going on in the outside world. Now for the next three weeks she is in limbo thinking about what she may or may not have said and what her future outside of the game really is. Now that is a have-not punishment!

- How come we did not get to hear Big Brother expert Matthew Morrison’s opinion on the season and the Aaryn controversy? He must be a super fan to attend a taping of this summer reality show!

- Aaryn accidentally drinks nail polisher remover and that is the not most shocking part of that event. Supposedly Helen was in the scene but erased from it completely. While not an important game move this goes to show the power of editing and how unless you subscribe to the live feeds you really don’t know what is going on.

- GinaMarie, Andy, Spencer, and Judd form an alliance and instantly start coming up with names. I feel as though people just like alliances now for the naming aspect. Every day they break and reform alliances just for the fun brainstorming of naming it!

- This week America the East Coast people on the East Coast who do not have Time Warner cable voted for the punishment of the HOH losers. Will they have to wear a bunny outfit or a chicken outfit for 48 hours? Is there an option for who cares? Big Brother either lets America choose the dumbest details or lets them completely change the game by voting people back in the house or choosing someone who can nominate someone themselves. No middle ground!

How do you think Julie handled the interview with Aaryn? Can you believe what the houseguests have said to one another? But first, did you vote for the bunny outfit punishment or the chicken outfit punishment? Let me know in the comments or @eastwoodmcfly.

Posted by Dual Redundancy at 1:41 PM