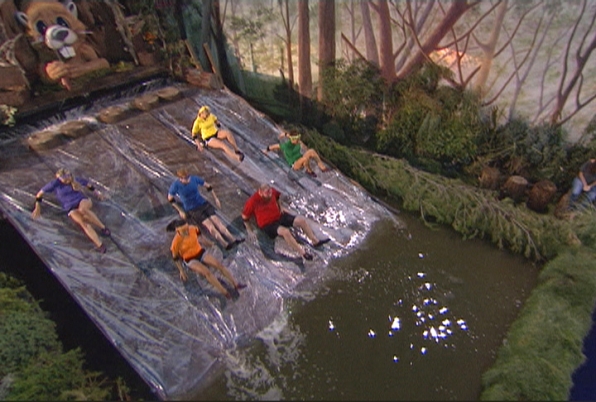 DA- Don’t start crying my fellow Big Brother beavers! I got your love letters about this drama filled week of Big Brother. Before I explore the logic of a beaver in the Big Brother house crying over lost love letters, we have a lot to cover first.

As we learned at last Thursday’s episode Aaryn won yet another HOH after McCrae, as the gentleman that he is, finally throws it for Amanda to win. GinaMarie tells Spencer that Amanda is ruining not only McCrae’s game but his life too. McCrae while she may be right don’t worry about taking love advice from GinaMarie of all people. You remember what happened with Nick right? This is the same girl who later tells Julie that she was prepared for the blind Have-Not competition because she looks around for Nick’s hat around the house at 3 AM 4 AM for some reason.

Aaryn has her heart set on nominating Spencer and Elissa but Amanda tells Andy right in front of Aaryn that she actually going to nominate Helen and Elissa. Umm… you didn’t win HOH Amanda so stop bossing everyone around and put Aaryn’s HOH basket items back. You got second and according to everyone ever that means you are not the winner!

But Amanda may not even have to pressure Aaryn to put up Elissa and Helen because Elissa may want to go home early. She tells Helen that she does not want to miss her kid’s first day of third grade and spend another day without her yoga mat in the Big Brother house. If she is evicted she is going pass the jury house, not collect $200 and go right home. This causes Helen to break down because if she is not there she loses a vote in the final two. Woah, woah, woah. We are getting a little ahead of ourselves aren’t we Helen? As Helen sobs all over the house about this it does paint Elissa in a bad light. However it does the exact same for Helen. McCrae points out she already assumes she is going straight to the end already, which he finds absurd. Spencer however just says Elissa is having a bad day but others don’t see it that way. “Rachel would be mad” about Elissa’s behavior and now she is an “embarrassment for her household.” The best line? GinaMarie telling Spencer it is not a bad day because she didn’t die or get hit by a bus! Very true GinaMarie! You are right about that!

After the houseguests are trapped in the dark where Amanda gets a giant blow (of air) to the face in a cheap simple Have-Not competition Helen and Elissa are put up on the block by Amanda Aaryn. But Helen isn’t too worried because she has Andy and McCrae to help back her up. Umm… Helen this is a completely fake alliance. You are not a member of 3 AM or any other time-themed alliance in the house.

Now for the classic “Otev” veto-competition. Now excuse me as I try to talk and figure this one out. For some reason Otev is a giant beaver that is crying because he supposedly wrote a bunch of love letters for the houseguests. Why a beaver? What does that have to do with Big Brother? Can a beaver write letters? Why did the beaver write extras for each forcing each contestant to find the same exact one? Is he sending multiple copies out of each one? Why am I trying to find logic in a Big Brother competition? Elissa ends up winning the completely well-reasoned challenge and proves she “is here to stay.” Well a few days ago you were ready to go home over a missing yoga mat so…

Amanda spills the beans to Elissa that it is Helen going home this week and that there is nothing she can do to stop it and if she does it is her leaving instead. Elissa tries to secretly come clean to Helen by giving hints, as she literally cleans the bathroom, about Amanda’s plan. However Amanda may have counted her McChickens (see what I did there) before they hatched.

Aaryn comes clean about the wine incident in week one and they all joke around about this event so far in the past. As Amanda says what she did, Aaryn is put off by how “rude and bitchy” she was. A fight ensues which leads Aaryn to see how she has been playing Amanda’s game getting Howard out and trying to evict Helen this week. She is ready to plan her own game.

However all this was for nothing as Spencer is put on the block replacing Elissa as she takes herself off.  Aaryn says she is doing this because she is being forced into a corner. While she may not playing her own game by doing this she is keeping her hands pretty clean. She has won four HOHs and a veto already yet she is hardly a target from week to week!

Before Helen packs up her bags to leave, she has a few more moves to try. She tries pressuring Andy to vote for her to stay and if he doesn’t and “sides” with McCranda instead then Elissa, GinaMarie, and Aaryn all have him as a target next week. While Helen is working her magic inside the Big Brother house, at the jury house Candice, Judd, and Jessie are getting ready to possibly reenter the house themselves. For the record I am angry that Big Brother did not sequester them individually and not allow them to conspire with each other like this. In the end though there is no use crying like a giant Big Brother beaver about it.

As Andy sits there speechless that Helen (the person he just backstabbed) could re-enter the house, the doorbell rings and they all emerge to compete in one giant HOH challenge. Playing alongside the houseguests the jury members are also competing for their right to re-enter the Big Brother house. Houseguests have to stand on a ledge catching ten balls as they are sprayed with hoses. While I question how these balls are equally reaching the houseguests at the same height, who may be throwing them, and at what various speeds they are reaching the players I’ll have to wait until next week to find out these big questions. As for the questions that actually matter like who will take the HOH crown and which juror will re-enter the house only time will tell!

While there has been some terrible opening lines this season the editors have used some great footage at the end during the credits. Between the absurd idea of David playing chess, GinaMarie crumping and Spencer playing chess alone they are finding some great b-roll!

Helen says to Andy that America is watching so he needs to align with the good people and get out the bad. Who is she to assume she is a member of the good? While she is right, the other people on her side are certainly not great but then again nobody is!

Jessie tells Candice and Judd she went out guns blazing. Jessie, from what we saw it was more like a water pistol.

And the winner for the worst time to mute during a live broadcast? When Julie explains the HOH competition and says “there is ______ in the sprinkler system.” Much like where did Clownie run off to, the world may never know.

Who do you think will win the HOH competition and who will re-enter the house? Are you hoping Helen can make a quick turn around and rejoin the game? But first, what item are you searching around your house for at 4 AM in the dark? Let me know in the comments or @eastwoodmcfly!

Posted by Dual Redundancy at 4:43 PM