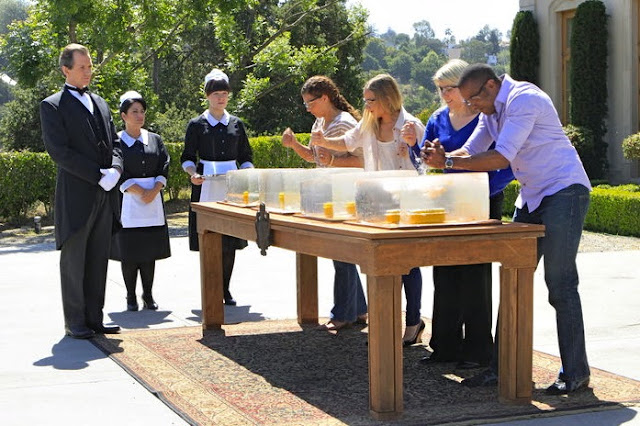 DA- Now I have a new theory. No not about who the killer is but something even more important. Whodunnit? is…Breaking Bad! Don’t believe me? What does Breaking Bad and Whodunnit? have in common? Both air Sunday nights at 9 PM. Neither has won an Emmy for outstanding series in their perspective categories. Both deal with death on a weekly basis. But the most important piece of evidence both of these television programs include something that starts with a “rice” and ends with “-icn.” Icing? Interesting transition to…

Ronnie who was catapulted out of the hot tub to the pool, which somehow has ice chunks scattered around him. Exactly how did Ronnie end up floating in a pool? No, it has nothing to do with a trained monkey this week. To figure it all out this week four rooms are involved in the investigation but with exactly four investigators how we will decide who goes where? Let’s stab some blocks of ice in a challenge that clearly favors strength and power. Unsurprisingly the sole male contestant Kam wins and gets to head the mystery room (which is the attic) as well as spend three minutes in a room of his choosing (which turns out to be the last known whereabouts).

The other three contestants now have to choose where they will go but they all must go to a different room. Kam’s team asks Melina, who is all by herself, which room she wants and she chooses the last known whereabouts. Instantly Lindsey also wants that room but Melina does not want to budge. Kam says she has to and just because she said it louder than Lindsey doesn’t mean it is all her choice. Actually Kam I saw the whole thing you asked what she wanted and she decided so boo-hoo for you!

Giles settles any disagreement as any good butler would by providing three envelopes to the three girls. As luck would have it sends Lindsey to the last known whereabouts anyways. Melina gets to visit the morgue as Cris examines the crime scene. After Cris is confused by how the drink next to a hot tub could freeze, she wishes she picked the morgue but Melina “screwed” her out of that! Wait! What? Am I missing something here?

As for Kam’s advantage, in my opinion, it was actually a disadvantage. Sure he got to see Ronnie doze off and then explode from the hot tub to the pool on some surveillance footage but so what? This could have been figured out later. To top it off because he got this room he only had three minutes to explore another room making it hard to find any details in any one room alone.

After everyone left their respective areas, Melina requests their help and asks them if they are ready to play the game now and not be cowards to pick on the lone ranger. Kam does have to remind her that at one point this 3-1 split was a 6-3 split with him the minority against her! However in a perfect bluff Melina does not even need their info anyways after she accurately guesses out of nowhere very specific and detailed information about each of their rooms. Hmm…I wonder how she knows that unless she was in each room… planning to kill Ronnie!

Next it was time for the riddle and this week it looked like they wanted to make a huge mess for the production assistants and interns to clean up. First, let’s blow up a giant vat of ping-pong balls that will make them go everywhere outside. These balls then lead them to the kitchen where they have to search through a giant barrel of beans. Beans are going everywhere! Good luck getting them from behind the fridge! Inside the bean barrel is a word search that would lead them to the next location. While Melina wants to completely solve the word search before she searches any room, everyone else decides to do one at a time because this is a speed round after all. Finally, we make it to the pool equipment where Kam finds that liquid nitrogen was used in the hot tub to help propel Ronnie high into the air.

But like the audience the contestants do not have every single detail about how exactly Ronnie died. In the end it was a long, long process. The killer saw that Ronnie went to the library to write a letter to Giles “spilling the beans” about who the killer is. See what I did there? You know with the riddle round and the spilling of literal beans? Now I am confused. How does the guy who had the least amount of information last week and thought a trained monkey was involved, all of the sudden know who the killer is? Umm…don’t ask me!

Anyways, the killer decides to send a maid to deliver a tea set with powdered cream spiked with ricin, which as we all know thanks to Breaking Bad is extremely toxic. Why does someone choose to put powder cream in their tea when most people use it in coffee? Umm…again, don’t ask me!

Ronnie then brought his tea to the hot tub, which would be filled with liquid nitrogen when the timer went off. Somehow the heated water magnified the effects of the ricin, which again because of the science I learned from Breaking Bad normally takes three days to work. When the timer goes off the liquid nitrogen reacts and blasts Ronnie’s hot body (due to the ricin) into the pool, which also freezes him at the same time. Man! How come the killer never just shoots anyone and calls it a day?

After Melina and Lindsey are “scared” this is where the episode gets even more unusual then normal. The next day Lindsey sneaks up on the group laughing and giggling as though she was drunk. I was almost sure that it was Lindsey under some sort of gas making her act loopy and that her time was dwindling. However, they all are treated instead to a limo ride and are given gifts which Lindsey thinks is a bomb. Hey Lindsey, if the killer is one of the four and gave you a bomb all of you would die and thus the show would be over for not only the audience but also the killer. A better guess would be if the box had a trained monkey inside. Sorry Ronnie, I’m not letting this go. 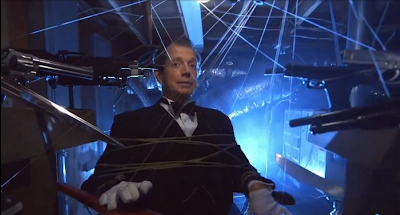 Next thing we know the limo does a crazy U-turn and heads back to the house. Who is even driving the limo? Giles? Nope! He is now being held hostage in a scheme that looks right out of a comic book! Out of nowhere fog overtakes the room and Melina is gone! Is she dead? Is she the killer and is fleeing? Are those dancing zombies of previous contestants that are coming back? WHAT IS GOING ON? For a fun and cheesy summer reality show that is pretty crazy cliffhanger you just gave us. Who do you think you are…Breaking Bad?!

- When Lindsey is looking at the fake ricin in the last known whereabouts, was she told she could not try it by production? Sure while it is not actually ricin many detectives would often try a taste of substances they find to see what they are working with. What would happen if in the scope of the show she did take a lick?

- Melina is eavesdropping on Kam’s team after he solves the riddle. Originally I thought this was production’s way of allowing her to survive the week (because I think she is the killer and the killer can’t be killed). This way it could be argued her score with Lindsey was close to the same so for the audience it would not be a huge shock if Melina survived over Lindsey this week. But then production threw us a curve ball anyways so why am I even looking into this theory…

- Giles points out that Cris has never been “scared.” I think this was a way to raise suspicion that she is the possible killer to the audience but I don’t buy it. I think this is a classic misdirect to take the attention off of the other contestants who actually have been “scared.” If I was the killer I would “scare” myself to help take the target off of myself!

- There is some more evidence online that is leading to Melina as the killer. While this could just be a weird happenstance and not an actual clue, look at this. Most criminals and killers wear masks and which one of the four has a type of “mask” on? Conspiracy theory!!

So who is the killer? Who is going to take the golden knife or whatever the Whodunnit? winner receives along with the quarter of a million dollars? But most importantly, why is the prize money for a show about stopping a serial killer less than the prize for a show about mean people sitting around in a house for 100 days? Let me know in the comments or @eastwoodmcfly.
Posted by Dual Redundancy at 9:35 PM