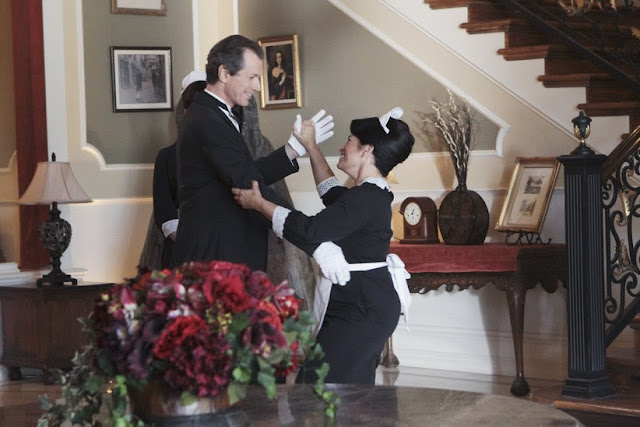 DA- We’re back on the case! Sorry about the absence for the deaths of Adrianna, Don, and Ulysses. I was actually fleeing across the country to escape a “scared” fate after one to many blog posts angered the killer. But now that I am safe in hiding I am ready to resume my Whodunnit? recaps and boy you better butter up that popcorn because we have a double feature to solve!

After Geno, Dana, and Sasha were “scared” the killer kicked off the night with a double murder. Both Dana and Sasha were found statue-like by the piano in Rue Manor. Despite five previous deaths contestants were perplexed that yes, some more contestants are “dead.” Man what is this killer’s problem?!

However, Giles was unfazed by two of more his guests being murdered and decided it was appropriate to bust a move with one of the housekeepers. After he showed off his dance technique, he spilt the groups up into the three sections yet this week there was two last known whereabouts instead of a “crime scene” to explore.

After their explorations the two teams that have formed (Kam, Cris, and Lindsey vs. Melina, Ronnie, and Geno) spilt apart to spill what they saw. One bright spot for the future of this show is the increase level of strategy involved. In weeks prior we had Geno tell only Kam and Cris information solely to try and get Ulysses “scared.” Now this week we have Kam trying to get Ronnie and Melina to completely shut out Geno so he definitely ends up murdered.

This plan goes into effect and involves Ronnie lying in front of Melina and Geno only to win the award for the worst poker face in history as he tries passing a note of the truth to Melina literally behind Geno’s back. Despite his best effort to shun Geno, Ronnie is forced to work with him when he is the one to figure out the first part of the riddle and that the clue is in the piano. In the end it is Cris who finds the morgue inside the morgue (MORGUE-CEPTION!) and thus solves the riddle this week.

Once they talk to themselves and state their case to cameras that mysteriously vanish as they cut back and forth between them, it is time for dinner. Ronnie should have known his lies would come back to him as they all shared their stories. Luckily for him, Geno, the person he stabbed in the back this week, ended up with a chandelier crushing his back instead. Close call Ronnie!

Despite Cris solving the riddle first, it was Kam who did the best on a written test did the best stating his case for the killer. To sum it all up, the killer broke into Sasha’s room and knocked her out with chloroform. He/she then loaded the body up in a cart and headed over to Dana’s room to get his/her next victim. Instead of knocking her out too, like a polite killer would, the killer threatened her with a knife and forced her to push the cart with Sasha to the elevator. After the lazy killer saw that Dana placed Sasha on the autopsy table in his second morgue, he/she finally knocked her out with chloroform as well. The killer then slashed their wrists, let the blood drain out, dressed them up, and let them stand by the piano to be found by the rest of the house. This killer is really getting violent if you ask me. They went from using a slingshot to knock Sheri out and a simple poison on Don as he made his breakfast to now forcing others to partake in the crime and redressing bodies as mannequins. Now this is where I draw the line!

Thankfully the killer saw the error of his ways and decided not to kill anyone tonight. Instead the contestants are all getting laid! No lei’d (because the next party is a luau). Then again after Giles starts undressing and holds a limbo contest maybe Lindsey is right that maybe at least Giles actually did get laid. This could explain his happy dancing from before. Then again he may just be ecstatic that all of his houseguests are dying and that means less people to take care and watch. Win-win!

However, the party is short live. When the lights cut out we find Geno crushed by a chandelier and next week’s question of “whodunnit?” lingers over the once gleeful luau.

- The last known whereabouts this week had crime tape blocking the doorway. Where did this come from? Did Giles buy some à la Kramer and set it up? Obviously it was not the police because I am not sure the police would first let untrained professionals solve crimes or secondly let a person continue to die every single week.

- As they head down to the movie theater, Melina says she does not want to go. She  fears they all may get trapped down there for two weeks and be forced to kill themselves. While anything is possible at Rue Manor, I am going to say this is highly unlikely. On the bright side it would be much easier to find the killer and figure out how they did it when they are all inside of a small room. So maybe this isn’t such a bad idea…

- For some reason a Hollywood theme overtook the investigation, which led to Giles to say every single cliché you could imagine. However, there were a few that irked the Emmy and Oscar obsessed side of me. Here they are one by one:


“Someone gave an Oscar winning performance…”
Really, these guys? The killer must not be watching Melina crying over two of her competitor’s possibility of exiting the game next week. Melina, this is a good thing for you!

“…and the nominee is… KAM!”
Actually Giles since he won the best theory he would be a winner. Since they all were eligible to win everyone else is a nominee.

“It looks like the other nominees were snubbed.” See you just said they were nominees yourself!
Also to be technical “snub” usually refers to the people not nominated at all. These guys were not snubbed. They just lost.

That is it for this week. Who did you wish won the award for “next to be murdered” and who actually was “snubbed?” But most importantly, do you think you could out limbo Giles? Let me know either in the comments or @eastwoodmcfly. Until next week watch your back! You never know when a giant chandelier may be on top of it!
Posted by Dual Redundancy at 9:02 PM