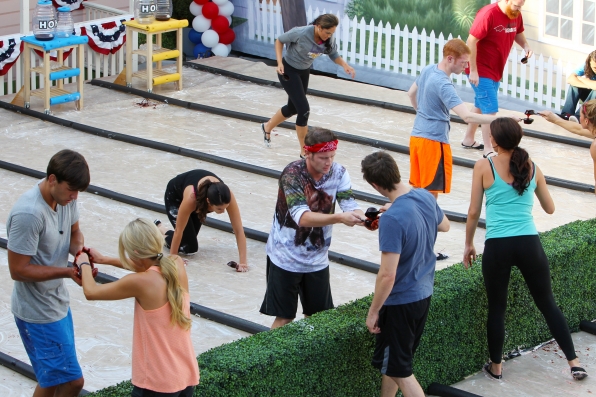 DA- Another week and another crazy seven days of Big Brother. Since we have to so much to cover and I am worried other bloggers may fill your container of BBQ sauce up before I do, let’s get to it.


When we last left our fairly racist group of houseguests they were starting an HOH competition where they had to fill up a container of BBQ sauce with a very small cup from one side of the backyard to the other. Houseguests working in teams of two were so excited to start; Judd even forgot to grab any BBQ sauce to transfer.

Now there is a catch. Houseguests can fill up another container with sauce to unlock a larger cup. At first this container looked huge while the cup did not look much bigger. However after Nick and Judd unlocked their cup and made it a tight race against Aaryn and Jeremy, I learned the old saying is true. Size really doesn’t matter. It is all about the motion of dumping your sauce- ew, wait, never mind.

In true Big Brother fashion the person who needed the win the most wins and Jeremy passes HOH duties to Aaryn (so he can still compete next week). Along with the HOH title Aaryn also gets to choose the have-nots for the week. Now Aaryn let me remind you. You just got booed by the live audience (and also lost your job for your racist remarks in the house) so let’s choose people who- wait Andy, Helen, Candice, and Elissa?!?! Those are the people you have been saying offensive things too! Are you kidding me?! Once inside the house the have-nots see they get to eat lima beans and liver (based on America’s vote) along with slop. Aaryn is disgusted by this and admits in the diary room she would not wish that on her worst enemy. Umm, have we forgotten what you just did a few minutes ago?

Aaryn, still bitter about her David “he’s not my boyfriend” Girton’s departure, and the Moving Company only wanting guys in the house, Aaryn puts up Helen and Elissa on the block. Jeremy quick question, if you and the Moving Company want only guys in the house who are you going to hook up with all summer? Because if you can’t do that then what else are you going to do? Play a social game for a half of million dollars? HA!

Elissa unsurprisingly wins MVP again and tells Nick to throw the veto competition so Helen and her have a chance to win. However, she then says if Jeremy does win he is going up unless he throws it. But that is very subjective to tell. So Nick don’t win the protection from the block and you will be put on the block, so throw it? This ladies and gentleman is the persuasive speech by your MVP!

Of course Jeremy wins the veto. This guy is unstoppable. Not only can he balance stuffed animals on a baby mobile but he can also rip a onesie when he wins a silly necklace. Woah! Now I know why the ladies love him. Before Jeremy uses his veto he warns the Moving Company that if his hook-up partner Kaitlin is put up and leaves he is out of the Moving Company (despite him saying earlier that they want an all guy house). This displeases the entire MC since there is no dictatorship in this company. It is an equal opportunity employer. Nick is put up on the block in his place but Nick is “the CEO” of the MC so he is not worried about leaving this week. Wait. Is there something I’m missing here? These houseguests and their contradictions!

Thursday’s live eviction foreshadows Nick’s demise quite early. Not only does he say he is in a good spot but Julie tells us that just when you thought you had everything figured out to think again. Easy for you to say Julie. When we only see about 90 minutes of content from the entire week there is a chance I may be missing something.

By the end of the episode it is Nick who is sent home and he thinks it was because of Spencer’s doing. Julie admits to him that it was. Julie, now Spencer did vote for Nick but I am going to count this win to Elissa and Helen who actually orchestrated his demise, not Spencer who just threw one of many votes towards Nick.

Before the night is over we crown Helen as the next HOH (after two crazy last minute tie breakers). Now unless something changes drastically it looks like it will be either Jeremy, Aaryn, GinaMarie, or Kaitlin who goes home, especially if somehow the “best player” in the house continues to be Elissa.

Now one of the most interesting things about this week is that Big Brother finally showcased at least some of the racist remarks the houseguests have been saying. While we saw Howard bring up some of the offensive comments and a montage of what Aaryn and GinaMarie have said, there were a few houseguests noticeably absent. Where was Spencer? Is Big Brother just trying to keep painting Aaryn and that side of the house as the villains while Spencer gets off Scott Free (for the people watching only CBS' broadcasts)? They take one step forward but two steps back with this if you ask me.

Then at the live episode Julie slyly asks Aaryn if she forgets that there are cameras in the house. Instead of taking the hint Aaryn says no and that she is just a true person. America is seeing who she really is. However she may want to recant this once she leaves the house. Next we cut to a package of other contestants bringing it up to her in the house. Aaryn finds these accusations obnoxious and annoying. Not only is she is not going to acknowledge it but she finds it as the most immature thing ever! Oh (big) brother…

- Jessie wants a boy because every other girl has one! As she follows Nick around the house complaining how she wants a boy too in the diary room, I could only think of this.

- HOH is really becoming worthless. Both weeks now it has been the MVP’s nominee to go home. So you get one week of immunity, piss off a few houseguests by putting them on the block, and then next week you can’t compete for HOH? Remember when this used to be the most powerful position in the house? Now America has a huge hand of how this game is played (very similar to how this entire trial season went).

- Julie needs to watch it with her questions to the houseguests. As for slyly mentioning that Jessie wants a showmance, Aaryn forgetting there are cameras in the house, and Jeremy not seeming worried when he was put on the block, she needs to watch what she says. Not to mention Julie mentions everything to the evicted houseguests including who voted for who. Now there better not be any houseguests coming back this season because if not this is completely unfair.

- This last HOH competition is the worst for viewers at home. We have no idea what the houseguests saw and memorized in the middle of the night. Sure they showed us a quick montage of clips but in these wide shots we cannot see any of the details that are being asked. True or false. Did the slop get delivered during the delivery of a teddy bear that was wearing a blue shirt? Umm…

- Very similar to Aaryn last week crying over David, GinaMarie balls for hours after Nick goes home. Calm down ladies! They are not being killed off like another summer reality show on ABC. You will see them again!

That is it for this week of Big Brother. But first, which one of the four “popular” kids is going home or do you think Helen has something else up her sleeve? Let me know in the comments below or @eastwoodmcfly. In a side note, I will be moving across the country this next week and moving into a new apartment. In other words I am not sure when I will have Internet and/or time to catch up with what I miss in the house. However, I will try to share my thoughts with a recap or at the very least on Twitter so make sure you are following @dualredundancy and I on for all the latest!
Posted by Dual Redundancy at 11:17 AM