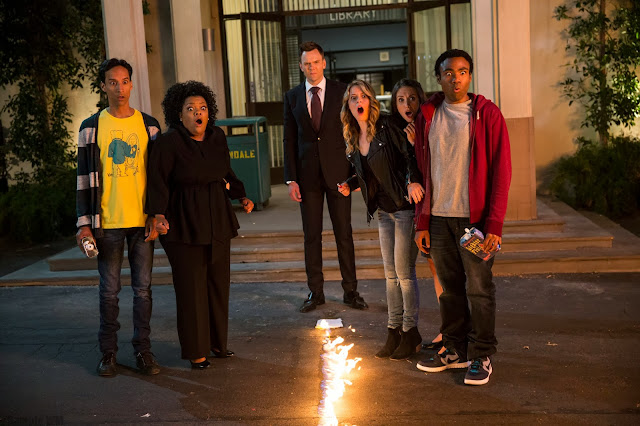 We thought it wasn’t possible. Why would a network re-hire a self-professed “rude asshole” after he was fired for a television show that receives no love from the Emmys and is easily beaten by CBS reruns? In the small off chance that this did happen there is no way he would be able to recreate the magic spark of the show with most of his original crew on other projects. Right? You are forgetting that this is Greendale Community College! The number two community college according to GreendaleCommunityCollege.com!

While I could go on for pages about how David Guarascio and Moses Port messed up season four, we do have to thank them for somehow keeping this show on the air. Without them we may not have season five and these back-to-back episodes to talk about. However, what Guarascio and Port both failed to do when they were at the helm is easily seen between these two new episodes. Dan Harmon can somehow take this absurd world and keep it grounded. He can easily blend the sometimes dark and evil nature of a character like Jeff Winger and mix it with heart and comedy. However most importantly, he can make believable characters sound real and not like happy fun time cartoons.

Season five’s premiere “Repilot” is very similar to the original pilot of the show. Between Jeff’s mischievous intentions for forming the study group to Abed calling back the pilot’s dialogue (and then calling back to how callbacks is a reference to…) it was clearly Harmon intent to ground the show and fix up some of the problems and storylines from the “gas leak” year. But don’t worry “grounded” by Community standards still includes holograms, inner-monologues in French, and a criminology teacher/Breaking Bad alum who draws cartoon ducks. Don’t judge! It’s one duck, his name is Jim and publishers are interested!

After a somewhat exposition heavy premiere (which was needed but at the same time hilarious) we were all caught up on the Greendale Seven (well six without Pierce or eight if we count Chang and the Dean…whatever).  In the second episode “Introduction to Teaching” we are introduced to professor Buzz Hickey played by Jonathan Banks. Originally when I saw promotional pictures for this season with Hickey in Pierce’s old seat at the study table, I was worried we could just get a Pierce 2.0; another man with the similar characteristics.  So far that is not the case. Mixed in with a little bit of Mike Ehrmantraut, Banks can intimidate as well as make you laugh.

While Jeff enjoys the “perks” of being a Greendale educator and has to deal with Annie who soon joins his Fundamentals of Law class, the B-story was dealing with one of the biggest enigmas in our history. Who really shot JFK? Was the moon landing staged? Nope! Nicholas Cage: Good or bad? Kevin Corrigan returns as Professor Garrity for a mini-course exploring the actor’s “abilities.” After Abed watches a few too many Cage films trying to answer the question, we are treated to an impression that easily makes this episode Danny Pudi Emmy’s submission tape, if the day/miracle ever came that he was nominated.

After Annie learns that her A- for a witness intimidation project is due to Hickey’s dislike for her and him trying to get her to drop Jeff’s class, a full on riot ensues. Even though Jeff tries to calm the storm with a typical Jeff Winger closing-speech (much like how Zach Braff closes every Scrubs episode with a voiceover wrap-up) it doesn’t work. The dean realizes what Greendale now needs is a “Save Greendale Committee” and after Jeff created a fake one with his former study group, the group sits around the familiar table in hopes of saving Greendale (and Community in general).


In and Out Points:

- Get those conspiracy theories ready. A Reddit user already found differences between the Dan Harmon opening credit image. No glasses because Pierce left? A broken pencil to symbolize “Steve” from the original pilot? Harmon’s name now in ink over pencil meaning his mark is permanent and not temporary? If we are going to be changing anything, why can’t that pen be purple?

- One of my favorite visual gags after Annie’s witness intimidation project? Humphries' thesis project which soon after this breaks in two.

- I am glad Chevy Chase and Dan Harmon settled any differences they may have for that great surprise cameo tonight. Never in a million years was I expecting that. It was a fun way to help transition to his absence and motivate Jeff, whom he has always had a special relationship with.

- Finally some of my favorite lines/interactions from Jeff and the gang: