Great Scott! A Back to the Future Musical?! This is heavy. 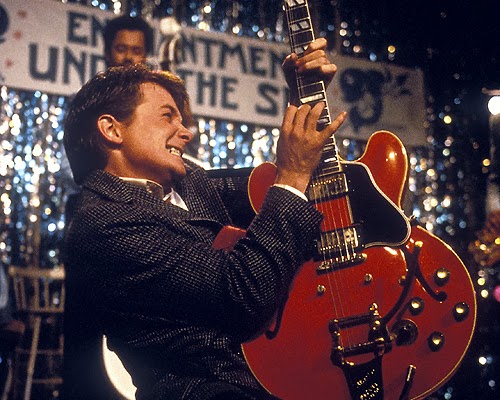 Last night news broke and was soon confirmed by the official Back to the Future website that the hit 1985 movie starring Michael J. Fox and Christopher Llyod is headed to the Broadway stage! 30 years after the Universal film mesmerized audiences in the movie theater, now the story will be told on the London stage before it (time) travels to America.

Both Robert Zemeckis and Bob Gale (director/co-writer and producer/co-writer respectively) are working with Universal Stage Productions, Colin Ingram (a London based producer) and Steven Spielberg’s Amblin Entertainment for this production. While new music will be added, original composer Alan Silvestri is back and iconic songs like Huey Lewis & The News’ “The Power of Love” and Chuck Berry’s “Johnny B. Goode” will be incorporated.

For me personally, I cannot wait to see the Biff Tannen musical number involving his hatred of manure and how you can create a whole song rhyming the phrase "1.21 jiggawatts!" As for how they will accomplish this just remember, “if you put your mind to it, you can accomplish anything.”
Posted by Dual Redundancy at 11:22 AM