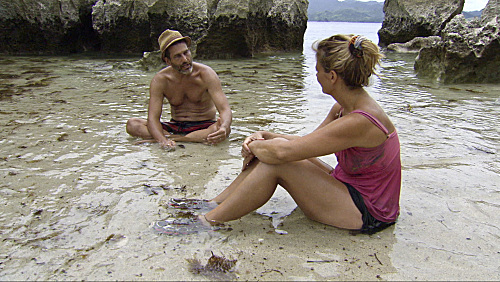 ML- Jonathan hit the nail on the head as to why he's such a beloved character on Survivor: he's a storyteller. He's basically doing the editors' jobs for them, spelling out the characters and their story. Lisa and Mike are the "Christian" group, not necessarily religious (though I know Skupin is mightily so, and I'm surprised that hasn't been made clearer given the show's recent infatuation with religious symbolism. He's been resurrected this season, for Christ's sake!) Survivor fans in the past have labeled Penner "Jonathan Christ, so he obviously fits in with them as well.

Abi-Maria, Pete and Artis are the "bully" group, and they've lived up to their title and then some. I can't believe how candid Abi-Maria is with Lisa and the rest of the tribe. She has literally no filter, and I can't hate her for it. Her immediate attack on Mike over the vote was spectacular, and I'm upset Penner 'fessed up. He may be the game's best storyteller, but he's not the best strategist.

That doesn't mean he can't work people. His manipulation of Lisa was some of the best I've ever seen done on the show. The two were both actors, though Penner never reached the same level of fame as Lisa. He came from a place of understanding, breaking down psychological barriers of child stardom. See, guys? Actors really have it rough.

Lisa pissed me off tonight. Sure, her emotional moment was touching and all. But she nearly had a breakdown after only one week of legitimate strategizing. The game, she lamented, was too big for her. Really, Lisa? A tired CBS reality show is too big for you? If Natalie White can win this, you'll be fine.

The Reward was my favorite moment, if only for the adorable misunderstanding with all the Filipino kids and Jonathan's "normal" name. Malcolm's enlightenment over giving back and working with kids again was equally moving. As hokey as the reward may seem to cynical audience members, I'm glad it had an impact on the contestants. Even mama Denise looked smitten by her herd of little ones.

Note about the Reward Challenge: A lot of people argue whether veterans have an inherent advantage returning to play again, which I mostly agree with, and I think they've proven it in the challenges this season. Mike was first to use the "toss pot high in the sky to dive at opponent" strategy a few weeks ago, and Penner's retrieval of all the bags was instrumental in Red's victory. Just saying.

The Immunity Challenge went by quickly, despite the apparent "learning curve", my favorite Probst-ism. I wondered whether I'd use my left hand to steady the paddle or roll the balls. By the time I made up my mind (hold left, roll right), Skupin had won. Good for him! Not a huge fan of his gameplay but it's nice to see him live one of his dreams. Of course, he gloated and boasted about it afterwards, in classic Skupin fashion.

He was the man to make the big move, though, despite the editing pointing us in the other direction. I bet fans who don't stick with the show to the final words assumed Lisa made the flop after all the awful treatment Abi-Maria showed her. No, Lisa still played the way of grace and loyalty and voted for Penner.

It was unsuspecting Artis who went home, though. He never really did anything of value this season except pick on Skupin, which makes sense now that Skupin got revenge. Denise was the mastermind of the plot, if you can call it that, based on her worry over Abi pulling the idol. Does Abi even know she can play her idol? Did Pete tell her yet? Either way, Denise got some positive strategy and some negative mocking of Abi finding the clam. I'm not sure if that's a good thing or a bad thing, but I'm not so sure she's our winner anymore. Is Lisa shaping up to be America's sweetheart? Will Penner keep outsmarting these whippersnappers up to Final 3? Or could Pete pull a Brian Heidik and nastily drag a goat like Abi-Maria to the end? Let me hear your thoughts below!

FYI: Gordon Holmes over at XFinity TV is a big Survivor fan and has established the Survivor Hall of Fame. This is the third year it's running and three more past contestants will be inducted into the Hall, following in the footsteps of:

To vote, tweet your ballot to @SurvivorHall or like the Survivor Hall of Fame on Facebook for more info. Any player listed above and any player from the current season are ineligible.

I'll be discussing my final ballot with my Dual co-host David Allen in our new podcast coming next week, but maybe you guys can help me decide! Since there are three spots, I tend to balance between the three Survivor "O's"- Outwit, Outplay and Outlast. Here are my preliminary picks: comment and share your thoughts below to help me whittle them down!

Check back next week for my final ballot in the Dual Redundancy podcast!

Posted by Dual Redundancy at 3:19 PM