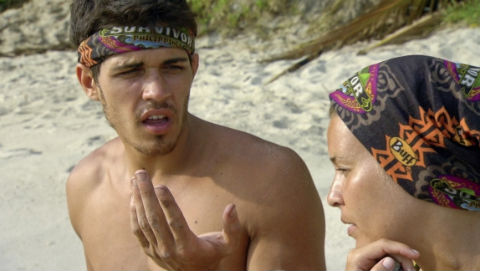 ML- Lisa, the MVP of tonight's episode despite Penner's miraculous victory, dubbed this the season of Good vs. Evil, the evil being Pete/Abi/Artis and the good everyone else. I wouldn't say they're evil (well, maybe Abi-Maria is) as so much as dumb. So many blunders were made by this alliance tonight, and still they survived unscathed, thanks to the real mastermind, Lisa.

Pete isn't completely idiotic, but he's certainly not the mastermind he claims to be. I bet if I were ever on Survivor I'd end up playing a lot like Pete: overly confident in myself to the camera, thinking I had the game figured out, when really there were countless plans unfolding outside of my awareness. His handling of Abi-Maria, the island's resident she-wolf, has been near perfect; first he turned her against her main ally RC, then he kept her close as a potential Final 3 goat. She seems to have no idea, instead suspecting everyone and everything else of being against her.

His mistake was talking to Malcolm. Lisa put her neck on the line to tell Pete about Malcolm's idol and blindside the poor bastard. Some may see this as a bad move by Lisa, but I disagree- the only reason the whole plan backfired was Pete's stupid ass confronting Malcolm. When Malcolm got flustered and nervous, it seemed like Pete had confirmed his suspicions and would join Lisa's plot.

Nope. To Pete, Malcolm acting suspicious obviously meant he wasn't hiding anything. WAT A TOOL. Malcolm is a personable guy, especially while giving confessionals, but he wears his nerves on his sleeves. He's an easy tell and Pete should have picked up on it.

Instead, the target shifted every three seconds in a genuinely exhilarating segment captured perfectly by the camera crew. Plans changed from Skupin to Malcolm to Kent to Carter to Pete, and by Tribal Council, not even the contestants knew who would be going home.

I was surprised by how candid Lisa was at Tribal. She has been eloquent in her confessionals, much like Denise, Malcolm and Penner, the main reason I like these four so much. She understands the game and knows what must be done to make it to the end- go to the end with less-likable prey. Pete gets it, too, but Pete doesn't understand he's the second-least likable guy on the beach. Anyway, Lisa was honest with everyone about outing Malcolm's idol, playing both sides and possibly messing up her game. For her, honesty seems to be helping a bit.

Honesty did not help Abi-Maria, the ever bigger idiot of the night. First she clearly spelled out the alliance divisions to Malcolm and Mike, and her backtracking to Malcolm did little to persuade him back to the Tandang side. When Malcolm actually showed off the idol for everyone to see, Jeff asked if anyone else wanted to reveal their's. There's no telling what went through Abi-Maria's head to convince her that pulling out her idol was a good idea, but reveal it she did. That goes down as one of the dumbest Tribal Council moves, for me, but since it wasn't a fatal flaw, we'll let it slide in comparison to those done by Erik in Micronesia and Brandon in South Pacific.

Before the vote, a few contestants made last-minute pleas to the group as a whole, speaking in codes regarding "Plan B". When it came time to play the idol... nobody budged. I'd say it was smart for Malcolm and Abi not to use it, as it guarantees them both at least another week.

The votes came down, with 5 for Kent (Pete, Abi-Maria, Artis, Lisa and Skupin), 4 for Pete (Kent, Carter, Malcolm and Denise) and Penner's vote for Abi. Was he truly that out of the loop and thought Abi was the target? Did he throw away his vote as a big middle finger to Jeff Kent ("I could have tied it up for you, but I didn't")? Or was he stirring up trouble, as Abi-Maria will surely go on a witch hunt to track down the voter, a la Lex in Africa? I'm hoping it's the third one, and she delivers and epic meltdown.

Jeff Kent was admired by many, but not so much by me. He misplayed his hand last week and therefore deserves an early ouster. As he said in his final words, he's made over $60 million playing baseball, he doesn't need $1 million (before taxes, as mentioned in a well-timed but poorly-attributed dig to Obama) from this silly little game. Sure, Kent, remind us how successful you were. Keep padding your ego. Probst will probably ask you back for another season.

My prediction from last week was right! Jeff Kent went home, though I expected it to be a lot less confusing than this. My Final 9 prediction was Carter, and I'm still relatively confident in that, provided Jonathan did enough to turn the attention away from him. Who knows where this season is gonna go, but I'm finally coming around to it.