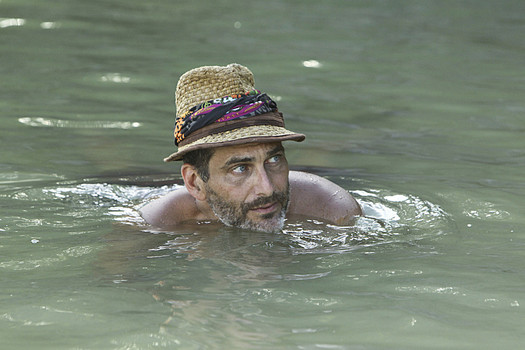 ML- Many apologies for the belated reviews from the past 2 weeks of Survivor. Scheduling shows in has been difficult with a full schedule, let alone forming reviews. This season has been interesting, but I'm still waiting for it to kick into high gear. The merge episode could be seen as a step in the right direction, or an example of continued mediocre gameplay.

First, a jump back to the previous week, where Katie was eliminated. Kalabaw (which I unintentionally referred to as Kalabal every episode, showing how invested I am in this season) and Tandang faced a stalemate in the big ball Reward Challenge and struck a deal over rice. Tandang, which was consuming ALL OF THE RICE thanks to Skupin's selfish ways, agreed to take rice while Penner and the Kalabaws (awesome band name, by the way) took the big barbeque reward.

I'm surprised at how the deal was edited. Survivor fans know that big feast rewards may seem great going in, but they always go right through contestants' systems, leaving them worse off. A stable cache of rice would be the smarter, less appetizing move. The editors decided to show Skupin as the idiot and Penner as the hero, however. This really doesn't bode well for Skupin's chances at winning the game.

He wasn't in much of a position to win, anyway, but could have been had he and RC joined forces with  Jeff Kent and the Kalabaws (anything "and the Kalabaws" sounds awesome for a band). Jeff Kent had two options: keep himself, Carter, a loyal Penner, Denise, RC and Michael together and boot Pete. Sure, Malcolm is a threat, but for the first week it wouldn't be smart to put Denise in a position of having to backstab her ally. That way, the opposing power alliance of Pete, Abi, Artis and Lisa could be disintegrated, and future blindsides could be in play for Malcolm, Penner and Skupin. Kent and Carter could leisurely stroll to the finals and Kent could win.

Instead, he freaked out over returning players and targeted Jonathan and his idol. It backfired, and he lost a potential ally. Now it's Kent vs. Penner and Tandang has an even greater majority despite losing a number in RC. Denise must be a bad luck charm because all the tribes she's a part of die.

The most important part of the episode was Lisa finding Malcolm's idol and striking a Final 3 deal with him and Denise. This could potentially work out, provided Pete and Abi don't make a surge to the endgame. As Malcolm said, though, going to the finals with either of those ladies could be Survivor suicide, as they'd garner social votes. Lisa is impressing me with her Holly Hoffman-style strategic comeback, but previews for next week show her getting pretty trigger-happy (machete-happy?).

So Final 10. Here are my perfect predictions for how the rest of the season will play out:

10. Jeff Kent. The Penner "slash and burn" preview is a false alarm, as it was for Rory in Vanuatu and Sandra in HvV. Kent is more of a threat since Penner is idol-less.
9. Carter. Kent's lackey.
8. Penner. Goodbye, America's Happy Warrior.
7. Pete. Malcolm/Denise/Lisa pull in Mike to turn the tide.
6. Abi-Maria.
5. Artis.
4. Lisa.
3. Skupin. Returning player fatigue/unlikable
2. Malcolm. Close but...
1. Denise. No cigar. Denise survives every Tribal Council and defeats her former Matsing ally by 1 vote.