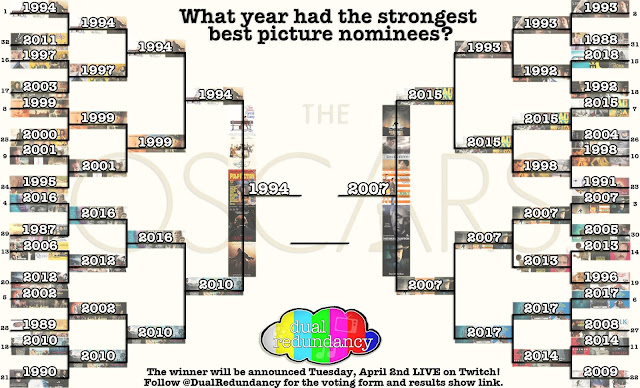 It is March and that only means one thing: March Madness! Inspired by a debate on the podcast we wanted to try and figure out which year had the strongest best picture nominees!

Every week we will have the best picture nominees of each year face up against each other until only one year remains! Some years have a stronger crop of nominees than others and it is time to finally decide which year The Academy had the “best” best picture contenders.

Voting will end on Tuesday, April 2nd and the winner we be revealed LIVE during our Twitch stream at 8 PM ET that night!

Speaking of voting THE FINAL ROUND HAS BEGUN! Please only one vote per person.

How were seeds figured out? Check out our initial blog post or the below video:

Posted by Dual Redundancy at 5:18 AM