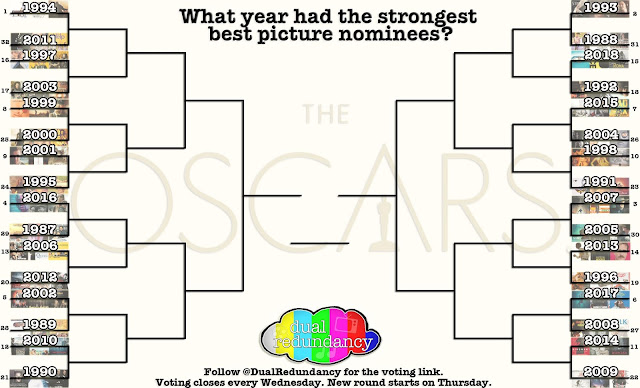 It is March and that only means one thing: March Madness! Inspired by a debate on the podcast we wanted to try and figure out which year had the strongest best picture nominees!

Every week we will have the best picture nominees of each year face up against each other until only one year remains! Some years have a stronger crop of nominees than others and it is time to finally decide which year The Academy had the “best” best picture contenders.

How were the seeds figured out you ask? Math! We looked up the average rating of each best picture nominee on the online movie social network service Letterboxd. These ratings were than averaged together to get one rating for each year. For instance, 1994 received a 3.98 because that was the average between Forrest Gump (4.1), Four Weddings and a Funeral (3.3), Pulp Fiction (4.4), Quiz Show (3.7) and The Shawshank Redemption (4.4). If there was any ties in these yearly averages each film’s domestic box office was averaged together for the year. Whatever year had the higher total average between the two took the higher seed. (Box office totals could not be just added together because after 2009 there was more than five best picture nominees).

Voting for each round will close on Wednesday night and the next round of match-ups will begin on Thursdays. Keep an eye on the blog, our Twitter feed and each episode’s show notes for the voting link!

Speaking of voting ROUND ONE HAS BEGUN! Please only one vote per person.
Posted by Dual Redundancy at 5:56 AM