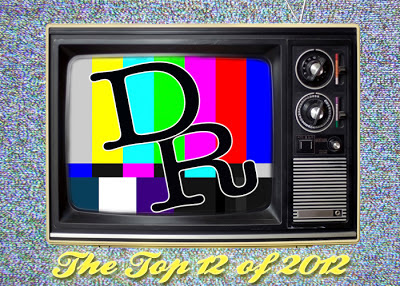 DA- Before we can close up 2012 and start judging the entertainment of 2013 we need to look back on what was so great about 2012. Below is what I believe to be the twelve best shows of 2012. (Possible spoilers below). 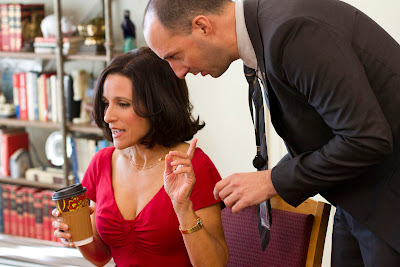 Based upon the 2005 BBC series, The Thick of It, comedy up-and-comer Julia Louis-Dreyfus is a vice-president that may even be cooler and funnier than Joe Biden. With episodes like “Frozen Yoghurt” where a terrible but hilarious stomach flu gets the best of her, it is clear why she won this year’s Emmy. While Louis-Dreyfus is the comedy anchor of the show, her coworkers including Tony Hale and Timothy Simons make one great political comedy team. 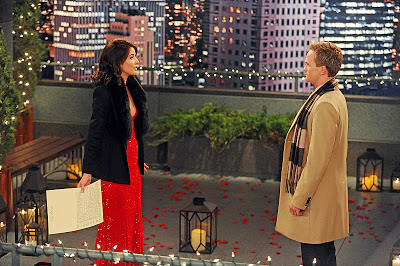 11. How I Met Your Mother
After a little bit of lull in the story of how Ted met his wife, HIMYM is back on track with a hopefully clear end date. With another mother flash-forward sighting in the season’s opener “Farhampton” to the latest episode of “The Final Page” where Barney proposes to Robin, the show can still juggle comedy as well induce chills. While recently it was renewed for one more final season, let’s hope we meet the mother at the end of this season and we actually get to see Ted date (and probably break-up, date, break-up, and finally date again) with the future Mrs. Ted Mosby before he marries and the story ends. 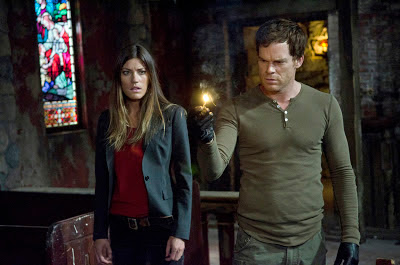 10. Dexter
Anything was going to be a step up from the last two seasons but Dexter came back with actual consequences for Dexter and his six seasons of murders. With acting nobody saw coming from Jennifer Carpenter back in season one to a much more interesting villain in Isaak Sirko than Colin Hanks’ Travis Marshall could ever be, I thought this show was completely back on track. While it derailed before the season was out with “Helter Skelter” and Sirko’s death, there was a point that I thought we got the old Dexter back. Hopefully these glimpses back to the past (as we saw in the finale) will continue and this show ends on a higher note like its’ previous seasons. 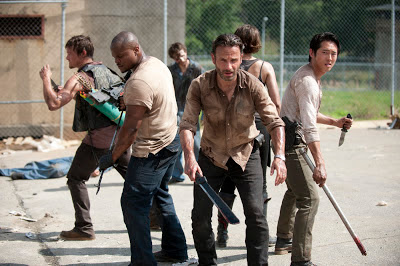 9. The Walking Dead
For this one we have to include the second half of season two and the first half of season three (which both aired 2012). After an extremely slow first half of season two that even the walkers could out run, Rick shoots zombie Sophia and the series began to pick up again. After the shocking deaths of Shane and Lori and then an intense battle to take over the prison, things are looking up for the AMC juggernaut. Plus with a great villain in the Governor played by David Morrissey this is one series I don’t want to see die. 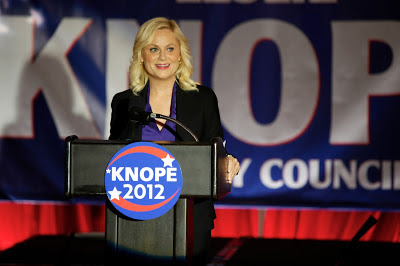 8. Parks and Recreation
Going into this season I was worried to see how they would work Leslie’s new government job and her boyfriend working in Washington D.C. but the writers know how to “treat” their audience with some swag. While not as strong as season three this consistently funny show has given us a hilarious debate episode written and directed by Amy Poehler, a great guest arc with Paul Rudd, and a sweet proposal between Ben and Leslie. With 30 Rock, The Office, and (probably) Community ending, at least NBC will have one show that will keep us tuned in and laughing to the peacock network. Plus they scored Vice President Biden in a guest spot…winning! 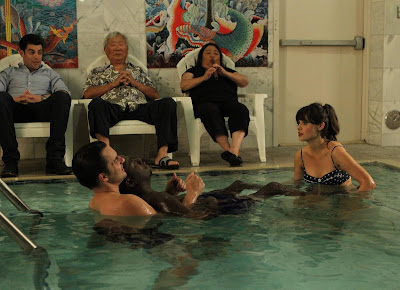 7. New Girl
After a rough first half of season one that focused too much on quirky and “adorkable” Jess, the writers turned to see the great ensemble of characters that live with her. Between Nick, Winston, and of course Schmidt the show has learned the strengths of every actor and plays to each one of them every week. Whether it is a crazy game like True American or guest spots from people like Olivia Munn, Parker Posey, Josh Gad, Rob Riggle, Jamie Lee Curtis, and Rob Reiner, I can’t wait to see what adventure the roommates get into next and how Nick will turn lemonade into lemons, which he has been doing since 1981. 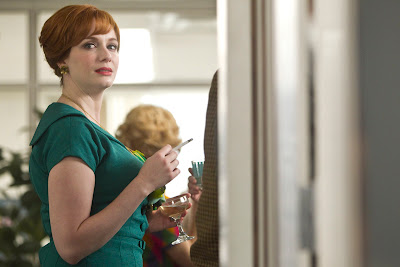 6. Mad Men
Even though Mad Men lost what would have been their fifth Emmy in a row, this season did not dip in quality. With strong performances from the whole cast including Jared Harris as Lane and Christina Hendricks as Joan it is shocking Mad Men did not receive even more Emmy love, which it still very much deserves. Don’t believe me? Go back and watch “Far Away Places” or “The Other Woman” which was not only my favorite of the season but also perhaps my favorite of the series. Ever. 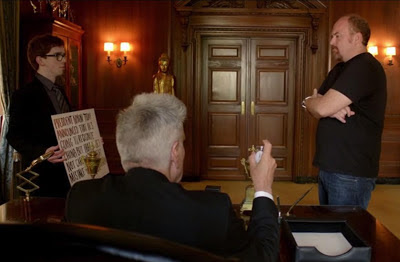 5. Louie
Oh Louie! I love how I can go into this show every week and never know what I am about to see. Every episode is Louis C.K. experimenting with what a television series is and should be. With a strangely hilarious Late Show arc that saw David Lynch, Chris Rock, and Jerry Seinfeld enter the world of Louie at the end of this third season, it is going to be extra hard to wait until 2014 to see what Louis tinkers with next. 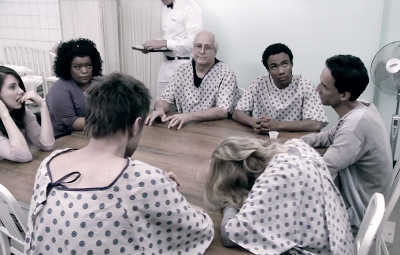 4. Community
While only airing twelve episodes in 2012 this abused sitcom’s third season which is on and off of NBC’s schedule could only be described as Community at its’ finest. Between a perfect Law & Order parody, a Ken Burns documentary about a pillow and blanket fight, an even better clip show episode, and a video game episode that starred Gus Fring, it is hard to choose a favorite from the bunch. Not to mention there was a season finale that could have worked as a perfect series finale as well. However instead of going crazy and weird like many season two episodes, season three found the perfect blend of being bizarre and yet maintain believable relationships between the characters (even if Chevy Chase thinks we do not want any of this). 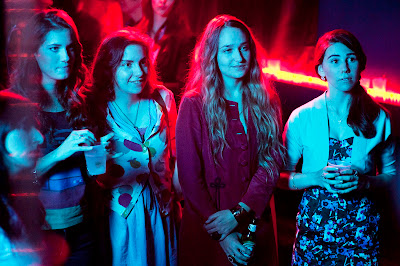 3. Girls
Lena Dunham as Hannah as said she think she may be the voice of her generation. Or at least a voice, of a generation. However despite all this uncertainty, Lena Dunham as Lena is definitely the new voice of television we all needed. As creator, director, writer, producer, and star of this hit HBO show, Dunham as not created Sex in the City 2.0 but instead a completely original and funny show that just happens to star four young women trying to figure out life in New York City. 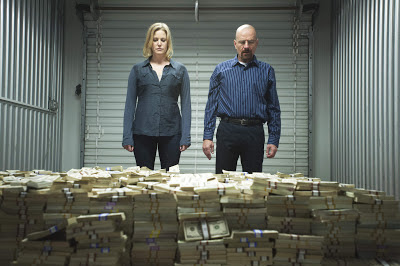 2. Breaking Bad
No, Vince Gilligan you got me! Even after only airing eight episodes this year these eight episodes are television at it’s finest. While I was worried how it could top the explosive season four, Gilligan has set up for a final eight episodes that really will show the (much deserved) downfall for Walter White. While it was a slow build to Hank’s realization, there was still a lot of action packed in between. Whether it is convincing Jesse that it was Gus who poisoned Brock, robbing a train with new guy Todd, or using the power of magnets, it will be interesting to see what’s next for Walter in this last “batch” of episodes. 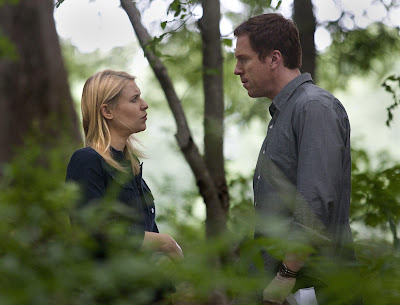 1. Homeland
While I have already blogged about my future concerns about the show, this season I was on the edge of my seat the whole time. In the first four episodes alone it was as though we were speeding down the highway to “Everybody Talks” and not looking what was in the way. With performances that will sure get more Emmy love from Damian Lewis and of course of Claire Danes, it is going to be just as interesting to see where season three will go especially with the possible absence from Lewis. But again it would not be Homeland if we were not let to sit and wonder what is going to happen next (as long as we know Saul and his beard are not going anywhere).

What shows are in your top 12 of 2012? Leave your list below in the comments or tweet them to me @eastwoodmcfly.
Posted by Dual Redundancy at 3:04 PM