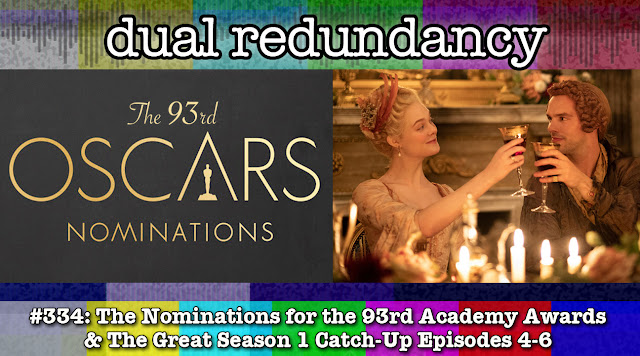 In this week's episode David, John and Kyle discuss the upcoming ad-supported HBO Max tier (1:45) and how Zack Snyder's Justice League was mistakenly released as Tom & Jerry (8:40). We also discuss why one YouTuber decided to watch Tenet on his Game Boy Advance (11:50) and the nominations for the 41st Razzies (16:45). Next we react to the nominations for the 93rd Academy Awards including the snubs and surprises (20:35). Finally, we continue our latest TV catch-up series by discussing episodes four through six of Hulu's The Great season one (41:15).

You can also listen to past episodes of the podcast on iTunes, Spotify, Twitch or on our YouTube channel. Also be sure to vote in round three of our March Madness bracket!
Posted by Dual Redundancy at 5:34 AM