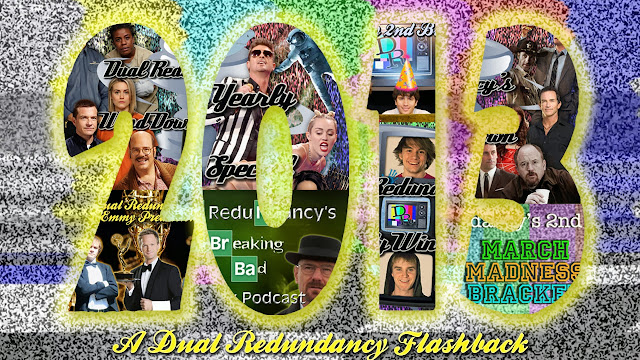 2013 has been a busy and exciting year for Dual Redundancy!

Over the course of the year we have done 21 podcasts with topics ranging from Academy Award predictions to Michael Bay being attacked by a flying air conditioner. Much to our displeasure we even talked about Glee at least twice.

In March, after Arrested Development was named the best TV show the year before, we held another bracket putting Oscar best picture winners against Oscar snubs and runner-ups. In the final match-up The Shawshank Redemption, literally found redemption and won over the godfather of classic movies, The Godfather.

You also voted every week on what shows we would cover on the weekly wind down podcast. In just nine episodes we covered 26 different shows including The Walking Dead, Parks and Recreation, Survivor, Scandal, The Good Wife, Homeland, and Masters of Sex. We even did an episode focusing solely on Netflix's programming from 2013 (House of Cards, Arrested Development, and Orange is the New Black).

However, one of the biggest shows of 2013 received its own weekly podcast. Starting in August every week we broke down the latest episode of Breaking Bad's final season. It was not only hard for us to say goodbye but you also had trouble since it was highly ranked in two separate categories in our yearly wind down special.

While we talked for hours and hours about entertainment this year, we also wrote a lot of it all down. Over here on the Dual Redundancy blog we had recaps on shows such as Big Brother, Girls, and Whodunnit? We also ranked the best shows of 2013 and some of the best American Idol performances as well. Finally, we became your one stop destination for entertainment news covering stories like Ben Affleck being named the next Batman and how Katy Perry possibly stole a song and liked it.