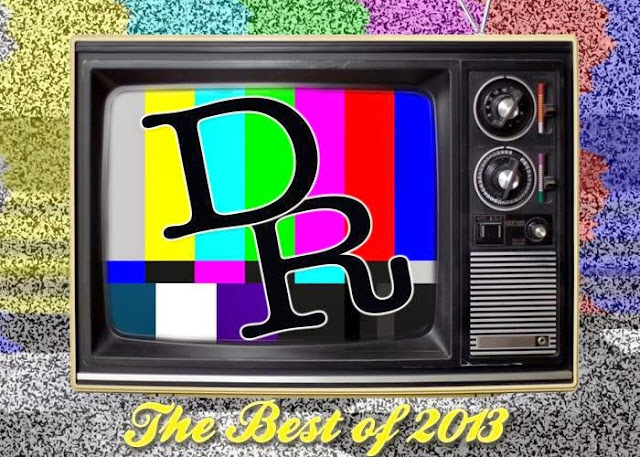 To rehash the ups and downs of this season's top tier TV shows would be redundant, as said analysis exists in the weekly podcasts, countless Twitter odes/diatribes, and basically every conversation I've had with any person in 2013. Talking/writing about television is a boxing match. There's only so many places you can hit, so many times you can pummel and be pummeled before you're exhausted. I want to appreciate the programs that provided me literally hundreds of hours of entertainment this year... but I don't want to talk about TV. Not this time. I need a break. Catch some Oscar-buzzy films, discover some new music, hell, maybe read a book. Come January I'll be refreshed and ready to criticize, analyze and categorize an onslaught of new/returning shows. But for this, I did something different. 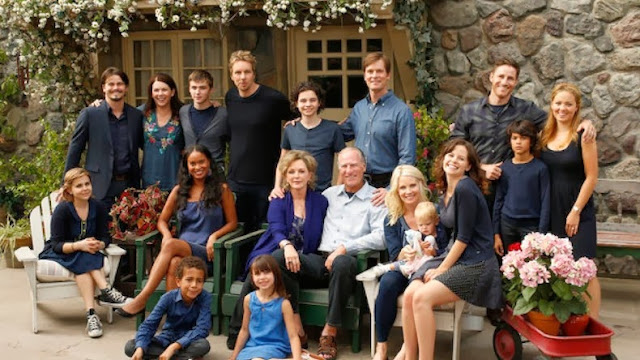 Parenthood is a family portrait. You examine its details: complex shading reveals brimming smiles, honest eyes, embraces of love and loss. It’s warm, and comforting. Comfortable. You don’t just watch the Bravermans; for that hour, you are a Braverman. It’s not just a portrait of any family – it’s your family, reflected by means of creator Jason Katims’ omniscient ability to lock into character. Into truth. It’s not perfect television – just because something is relatable doesn’t make it compelling. But aren’t “family” and “perfect” mutually exclusive? 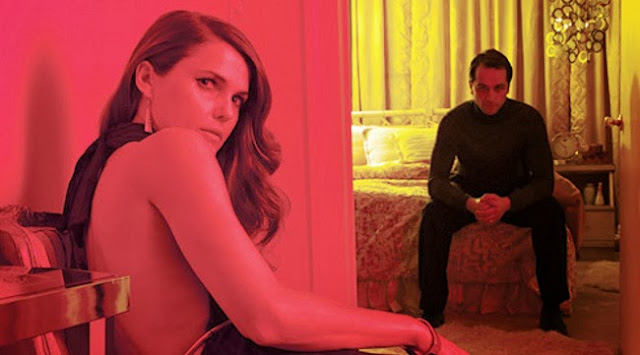 The Americans is a blind date. New. Carefully plotted and prepared. There’s an openness, yet it’s littered with half-truths and asterisks. Or is it? You’re constantly questioning, and the answers are just what you want to hear. It’s suspicious. Is it putting on a front? Or is it love? You schedule another date. You need to know. 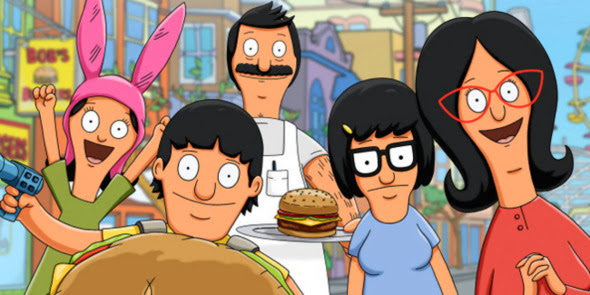 Bob’s Burgers is a full belly. You sit back, unbuckle your belt. Laugh. Hum a little tune in your blissful delirium. You’re satisfied. Blood rushes from your head to your stomach, as your brain turns off and your gut gets its due. If only the feeling lasted longer. 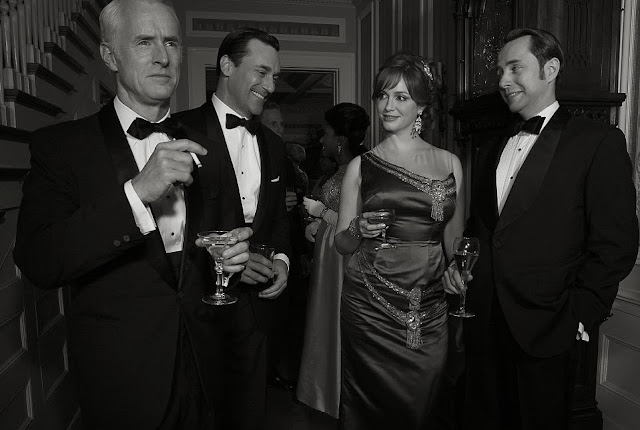 Mad Men is your grandparents’ house. For years you’d visit and marvel at the trinkets and treasures, explore rooms and drawers for the first time, bond. But now there’s a sense of loss. Constant renovations are needed to keep the house going. You know the ins and outs of every nook and cranny. Loved ones still convene, but  conversations follow tired scripts, like religious responses. The magic is faded… but not gone. Because somewhere, in the depths of the cellar you were too scared to explore, is something that’s hidden for as long as you’ve lived, that’s waited for you to grow up and find it. 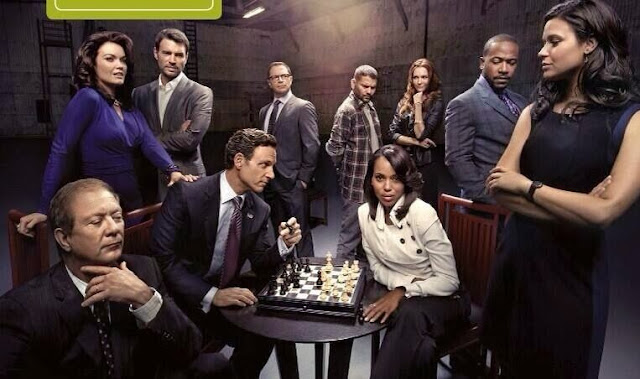 Scandal is a hurricane. It’s grown from tropical storm, gained momentum from the ocean and finally broken through on mainland.  The scope of the chaos is majestic, patterned, cyclical, almost fatalistic. What goes around comes around, and everything (and everyone) gets sucked in. We must hope those in the hurricane’s path have prepared for it’s trajectory and can minimize unnecessary damage in the coming stages. 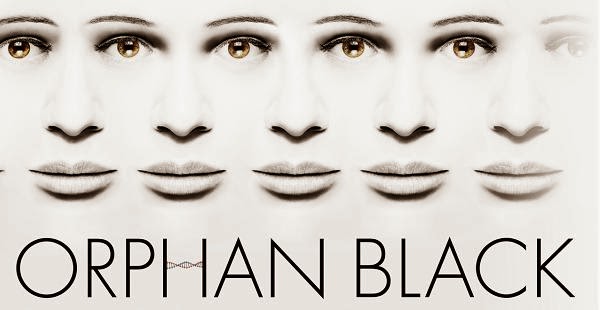 Orphan Black is an experiment. You’re skeptical. There’s no way this could work, right? Early reports are promising, so you test again. And again. Whatever’s happening defies the laws of science. There’s no way these ingredients, in this environment, with so few seeds to be observed, can yield such excellent results. It’s a freak of nature, in the best possible sense. 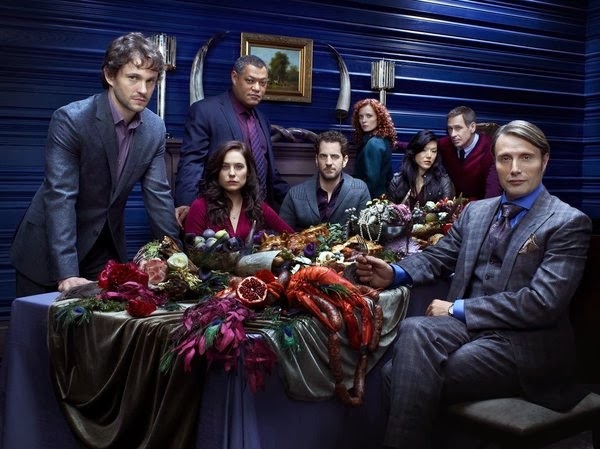 Hannibal is a five-star meal. The ingredients are familiar, but master chef Bryan Fuller prepares and plates with such flair, you spend as much time ogling its beauty as devouring. It’s cooked to perfection. Dark. Every bite delectable. The restaurant earns bad publicity from time to time, steering many food connoisseurs away for the dish. Their loss. 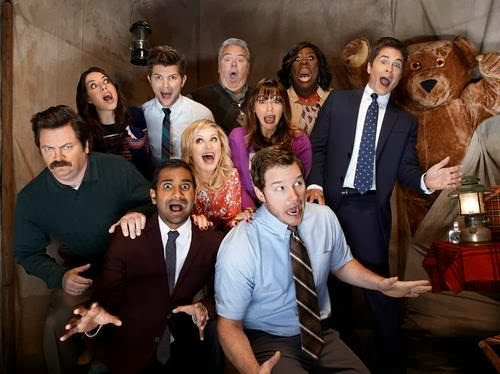 Parks and Recreation is a PowerPoint slideshow. It’s bright and colorful, with jokes and musical cues sprinkled throughout. While not the most original, it’s comforting, and when made carefully, inspiring. It teaches you something: how to be a better person, how to make the world a better place. However corny, it makes you feel. 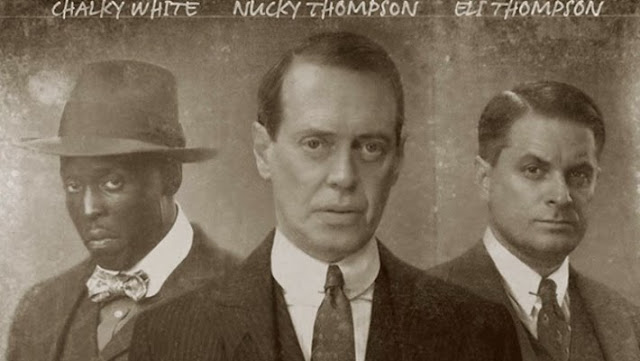 Boardwalk Empire is a bottle of whiskey. Not the most popular order, but revered by its consumers. The first taste is overbearing. Dry. But the more you drink, the more you appreciate the subtle flavors infused within. You build up a tolerance, so each subsequent drink is easier to swallow. But be warned – this is no light, fruity drink. Tragedy awaits at the bottom of each bottle. The hangover is something fierce. And just like real whiskey, you’ll find yourself crawling back for more. The pain is worth the pleasure, and no show balances the two better. 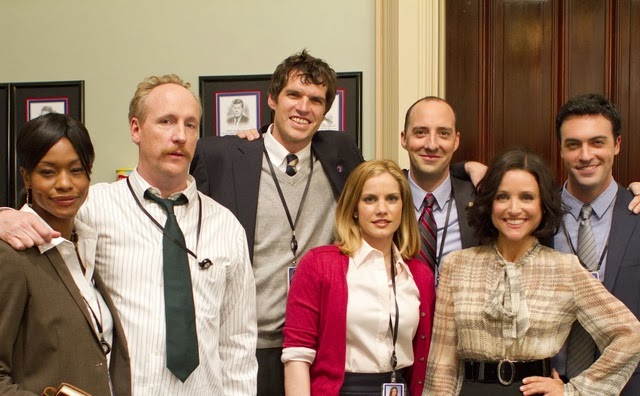 Veep is a machine gun. It lets off more bullets per second than anything else on the market. It’s swift, precise, and oftentimes brutal. Screw the politics surrounding it – it gets the job done. It kills. (Note: I am not condoning actual gun use. In this scenario, “bullets” are “hilarious insults”. The politics surrounding gun safety are important and should be discussed at length, because real people do, in fact, die. I use “kills” here in the colloquial sense, like “Oh, that Brad Garrett. He kills me!”). 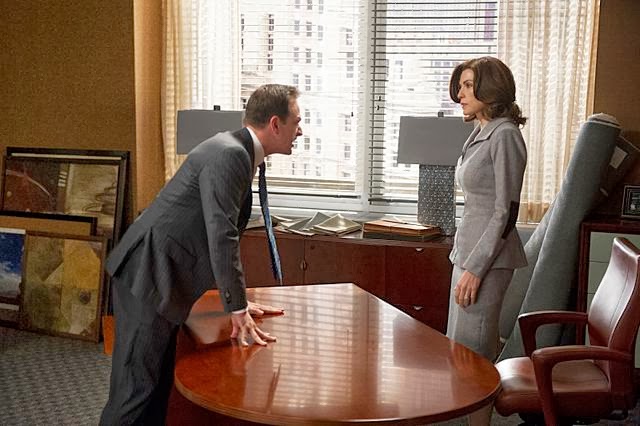 The Good Wife is the internet. It’s saturated with viral videos, breaking news, human drama, sex. It’s addictive. It’s so incredibly modern, and accessible, and evolving every day as more and more people flock to discover it. It’s got a unique language; the snark is infectious. You meet new people and catch up with old. Truly something for everyone.

Masters of Sex is an aged streetwalker. Foremost, you’re interested in the sex. It’s the draw, the reason she’s on such a premium street in the first place. She’s got a history, though. She’s seen it all. If you listen, she’ll fascinate you. Watch the lines in her face, the light (or absence of) in her eye, and you’ll appreciate more than the sex. The sex was her job, not her identity. 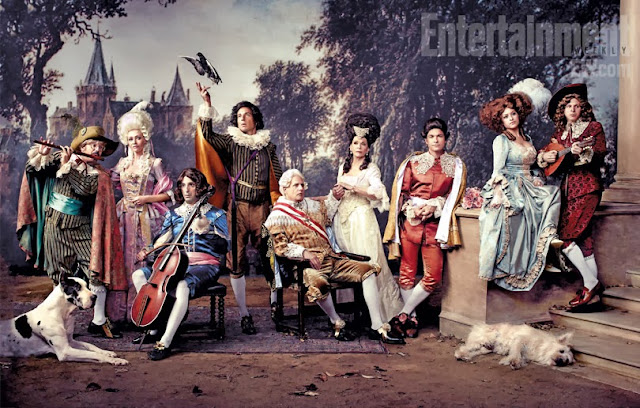 Arrested Development is a jigsaw puzzle. Meticulously constructed, each piece is wholly unique and essential to the finished product. Only when completed can you grasp the full picture and respect the crafting process. It’s more fun to complete with fellow puzzle-lovers, who know the old pieces by heart and can roll with the new. Do you laugh uproariously while completing such intricate puzzles? No, but that doesn’t mean they aren’t fun.

Justified is a local bar. You go to unwind the week – “happy hour.” You’re surrounded by characters, many of them seedy. You laugh – a lot, as the bartender has a joke for every situation. You might tear up, reminiscing on the good ol’ days. Odds are you’ll catch a fight outside. There will be blood. But your seat is warm and always open. Your drinks are always cheap and always in stock. A home away from home. 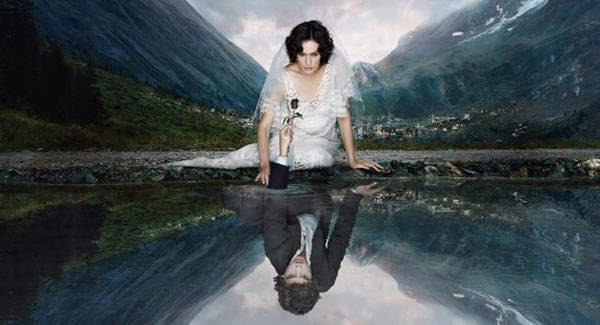 The Returned is a bump in the night. It's quiet, barely noticeable even to the most selective of ears. Once heard, it burrows in the mind, lingering in the conscious. You try to fall asleep, but can’t shake it. It’s not scary, per se, but spine-tingling. Something made the bump, but it’s probably nothing. It couldn’t be as dark as you’re imagining, right…? Wait – there it is again. And it’s louder. Oh no… 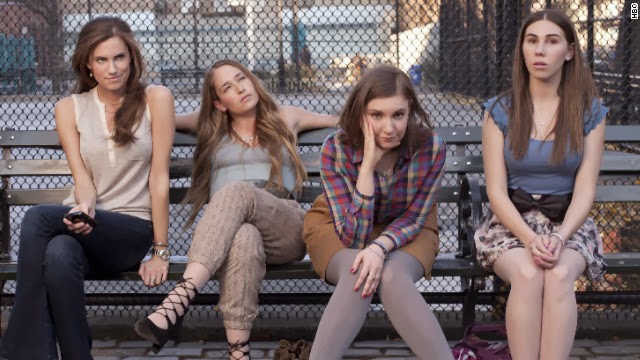 Girls is a Friday night. You have no idea what kind of trouble you’ll end up in, or who you’ll wake up with. It’s about spending time with friends, making memories, letting go. It’s an attempted escape from reality, but each decision, each drink, stems from the plaguing troubles of that reality. It’s the best and worst years of you life, combined and condensed. 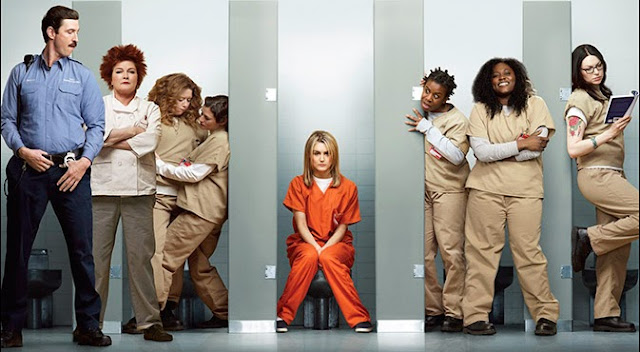 Orange is the New Black is a gumbo. Every bite a different taste, a different culture, blended together in delicious harmony. It’s sweet, soulful, savory. Superb. Like your mama made it. You can eat it all at once, or dole out smaller portions as your appetite demands. It’s filling. And it’s good. 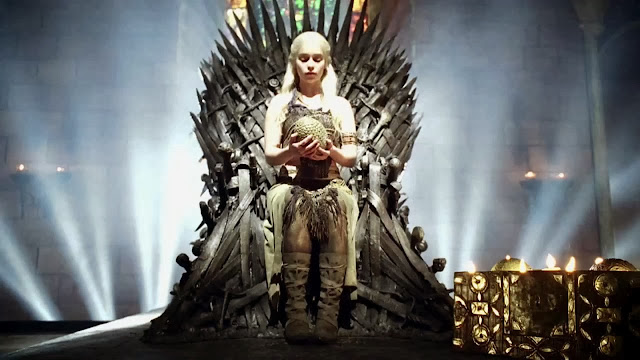 3. Game of Thrones, HBO
Best Episode: "The Rains of Castamere", "And Now His Watch Is Over"
MVP: Nikolaj Coster-Waldau

Game of Thrones is a storybook. (Ok, you knew that.) It unfolds in chapters, its arcs stretching longer, spread thinner than your common TV show. Rich in character, conflict, theme and, most importantly, setting, it weaves these elements at a glacial pace, allowing the audience to appreciate every aspect of such high production value. When it twists, it twists hard, making it impossible to put down. It’s good enough to make a television man want to read. 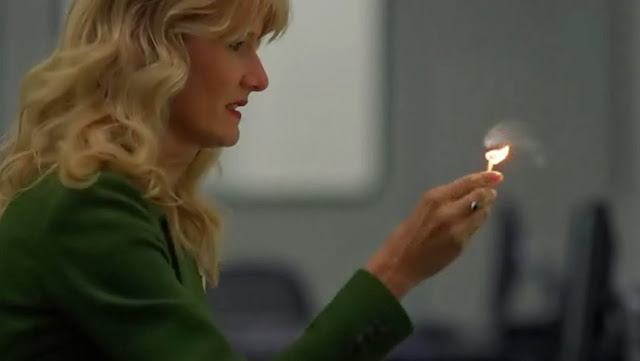 Enlightened was a butterfly. It’s two halves symmetrical, perfectly in sync. It flittered too quickly for anyone to notice – anyone without an eye for beauty. It was alive. If you listened closely, you’d hear the mysteries of the universe unravel, discover the path to love, find yourself. Find enlightenment. But it was too special for this world, too real, too good. It mattered, but now it's gone. 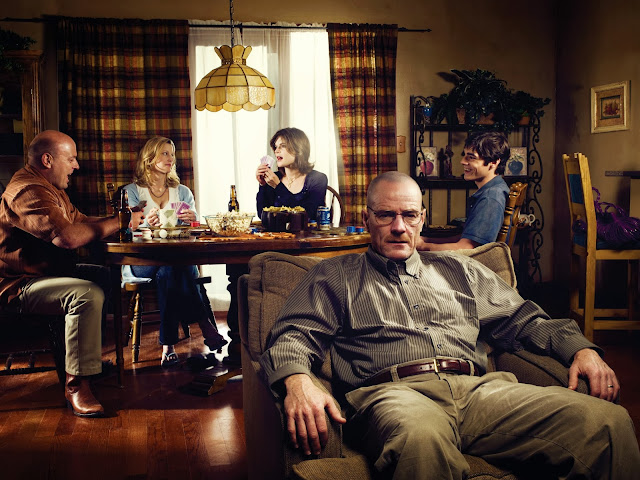 
Breaking Bad was just a television show. That’s what I keep repeating to myself. It wasn’t the most beautifully shot images ever aired on the small screen. It didn’t feature the best acting I’ll ever witness. It didn’t feature the most deftly written episodes, scenes and lines ever penned. It wasn’t perfect. I keep telling myself, because I hope something will some day top it – maybe I myself can one day reach it’s peaks. But I’m lying.

(For more Breaking Bad, check out our weekly recaps of the final season here.)

Check back later this week for Dave's Best TV ballot, as well as our picks for the best of 2013's film, music and more!
Posted by Dual Redundancy at 9:15 AM