Podcast Episode 354: The Chair Series Premiere and The Other Two Season 2 Premiere 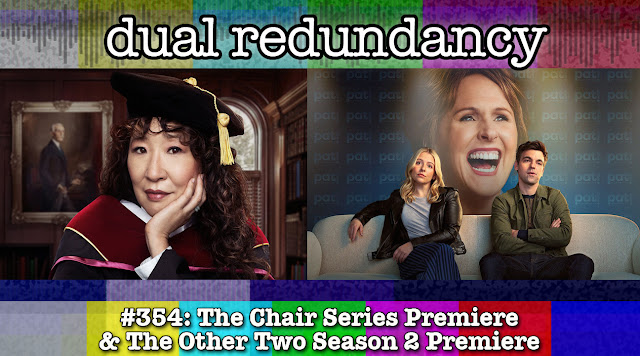 In this week's episode David, John and Kyle discuss Mike Richards being fired as executive producer of Jeopardy (1:45), TV Guide's list of the 100 best TV shows on TV right now (5:55) and the viral video of James Corden performing a Crosswalk Musical as a rat (15:05). Next we preview Spider-Man: No Way Home by discussing the new trailer (19:20). We also review the series premiere of The Chair (28:10) and the season two premiere of The Other Two (40:20). Finally as Summer comes to an end we recap the films we picked and auctioned off back in May (49:05).

You can also listen to past episodes of the podcast on iTunes, Spotify, Twitch or on our YouTube channel.
Posted by Dual Redundancy at 7:01 AM