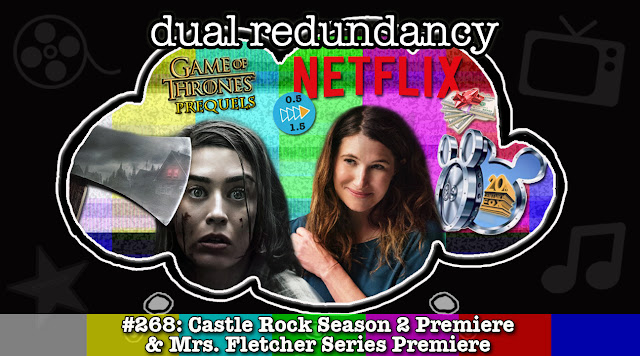 In this week's episode David, John and Kyle discuss Netflix testing out variable playback speed (1:45) and the possibility of the service passing out cash bonuses for popular shows (10:00). We also discuss the Game of Thrones prequel series that were cancelled and picked up in the same day (15:20). Next we discuss the possibility of Disney blocking classic Fox movie titles from revival screenings (25:55). Finally, we review the season two premiere of Castle Rock entitled “Let the River Run” (32:20) and the series premiere of HBO’s Mrs. Fletcher entitled “Empty Best” (45:35).

You can also listen to past episodes of the podcast on iTunes or on our YouTube channel. Also be sure to subscribe to our Twitch channel!
Posted by Dual Redundancy at 4:43 AM