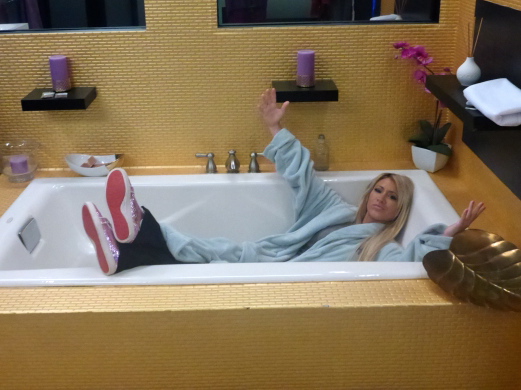 DA- No time for witty opening remarks or for Elissa to get her bag on her way out. No, Elissa what are you doing? We will get it later. We have a lot to talk about! It was a double eviction. Come on! Just go out the door so we can get started…

After last leaving our houseguests they were competing for the coveted HOH by hopping around like bunnies and moving eggs through chicken wire. There was a lot on the line. Not only can you become the HOH but also if you lose then you are forced to wear a chicken suit for the next 48 hours! Calm down Judd, it isn’t that bad. Speaking of whining, McCrae I see that you are having a lot of problems with your long hair getting in your face. If only you had a bandana and could use to hold it back but yours is too busy being worn as some weird fashion statement. If only you had multiple ones of various colors you could wear. Hmm, maybe next time!

GinaMarie takes the competition and Amanda can’t figure out why Elissa is celebrating. She claims it is her fault that Aaryn went home. Amanda, Aaryn needed three votes to save her. It is not like you, your boyfriend, and her best friend GinaMarie could have voted for her instead of- oh wait. You could have! Silly me!

But Amanda does not stop there with her masterful game play. She tells GinaMarie she needs to nominate two people the house hates. Lucky for her that is…Amanda and McCrae! Now as long as can make it through her nomination prese-… pre-set… presentmatio-… speech it looks like a done deal.

After Judd’s help with pronouncing “dynamic” and choosing other words after struggling, McCranda is finally on the block to the displeasure of well, McCranda. Instantly Amanda starts calling GinaMarie out for lying to her that she was safe. Umm, so if she told you that you were going up you would have been content?

Amanda and Elissa fight again and everybody is a chicken to stand up for her. Wait, let me rephrase that. Everyone is a figurative chicken to stand up for her except for Judd and Spencer who are literally dressed like chickens and are quietly watching the fight take place. My favorite moment of the various fights? Amanda sarcastically telling Elissa that she is so “mature” as she walks around the house in her underwear. However, there is one moment that really angered me. Elissa is listening in to Andy and Amanda talking in the storage room. When Spencer sees he goes in and tells on her (mostly to save his skin so Andy does not say he is with Amanda in front of Elissa). After hearing this Amanda swings open the door with all her might, probably in hopes of hitting Elissa. While sure Elissa is eavesdropping this is clear attempted violence. What’s the difference of Amanda throwing something at her like pork rinds and missing then trying to hit her with a door and also missing?

After her temper tantrum Amanda lets loose with McCrae and cries that she did so good to get here. She is ready to quit and tells Andy who immediately tells her to stop that type of talk! Umm, Andy you may want her to quit so she can skip jury where she won’t be mad at you for backstabbing her and diluting the whole jury to be against you in the end but hey, that’s just me.

Finally it is time for the veto competition and for ballerinas who love to bowl this competition is for you! After spinning around for 15 rotations they have seconds to throw balls up a ramp to knock down pins. Of course Amanda is chosen for every single round and by the end it is McCrae and Amanda to battle it out. McCrae even compares this situation to the book/film Old Yeller (which was coincidentally was a major point from this week’s Breaking Bad). First, Walt goes back to get his ricin in the Breaking Bad premiere the same night the Whodunnit? killer uses it in the tea to kill Ronnie and now this? What’s next? A competition with a prize to Belize? Houseguests, be warned. A trip to "Belize" may not be to Belize if you know what I’m saying.

In the end McCrae wins it by a millisecond (or that is what the editors want us to believe and we all know how tricky they can be). He finally does not let Amanda cloud his judgment and chooses to take himself off thereby forcing GinaMarie to put up Spencer, who by volunteering breaks the record for being on the block the most in one season!

Speaking of records this Thursday’s double eviction is the show’s 500th episode!! Can you believe it? 500 episodes! That’s insane. Is there anything more unbelievable than that? Well actually there is. In some weird out of nowhere miracle, Amanda asks for Elissa’s vote and they become, dare I say it, friends. These are the same two that days before were saying some of the most disgusting things about each other and their families. To make it even more official they exchange jewelry including Elissa’s wedding ring! This sounds serious. Are you worried now Spencer? This may be “the dumbest thing [you] have done in the house.” While you may think this is, I think this may be instead.

In the end Amanda almost had the votes if only Andy was really on her side. After a 2-2 vote GinaMarie had to break the tie and picked Amanda to leave the house. Once in the audience and receiving some boos, Julie brings up the bullying. She regrets some of the things she said but asks if we saw Elissa against her when Julie interrupts and says we saw everything. WRONG! Sure the Internet saw everything (or close to it) but the television audience is getting only a fraction of the story including how this fight between the two girls was more two sided then we were to believe. Unsurprisingly Julie skips over the racism, which only proves my point that Aaryn will be the face for the disgusting comments this season despite the fact that many other houseguests including Spencer and GinaMarie will not even be mentioned!

Anyways the week is not over yet. We are treated to the famous “clown shoe” competition where contestants have to search for bones in a pile of grass. Last time it was a veto competition but this time it was for HOH. McCrae wins and without much time to think nominates GinaMarie and Elissa. At first I thought he was trying to trick Andy to not play hard in the veto competition (especially after Amanda said “I thought I could trust you” to him on the way out). However, I think he thinks it is still Elissa who voted for his girlfriend/fake wife/whatever Amanda is to him. Before McCrae realizes his mistake and gives The Exterminators a clear target in Elissa it is time for the veto competition.

This year’s double eviction veto is very similar to last year’s where houseguests had to guide a racecar through a long, winding puzzle. Out of nowhere Judd takes it and he decides not to use it for either two reasons. One he is mad at Elissa (after finding out she knew about his backdoor at the last double eviction) and wants her to stay up OR GinaMarie’s speech is so compelling. She tells him “if he wants to use it- that’s great. If he wants to use it on Elissa well that’s not a good idea.” Wait, so it’s a great idea to use it as long as he doesn’t use it on Elissa? GinaMarie you have such a way with words!

In the end it is Elissa walking out the front door-what’s that Elissa? Yes, you will get your bag later. I promise. Now please let me finish this recap! As I was saying Elissa leaves and talks with Julie about how she has no idea what just happened (or probably happened during most of the game). She also shares Rachel’s advice for her, which was to play without her emotions. Did Rachel even do that?

That’s it for your weekly Big- oh my god Elissa! Here! Now take your bag and go the jury house already.

- I know I have talked about how crazy GinaMarie is but this week I have more concrete proof. After winning her HOH she begins talking to her “bunny” Aaryn through her memory wall photo. Also the majority of Sunday night’s cutaways? It was her alone in the HOH room practicing her hip-hop moves in an oversized hoodie.

- Spencer begins a story but is then called to the diary room mid-sentence to receive his chicken outfit. “I went to the doctor two blocks from my house…” Wait, that’s it? We will never hear the rest of it?! Why did he go to the doctor? This show is just like Lost with all of its unanswered questions!

- For some reason the houseguests find the whole house covered in balloons and are forced to pop every single one to find 3 tokens in hopes of winning $10,000. Why? No reason. I think Big Brother was just feeling generous this week or was just worried for everyone in the house making rent after losing their jobs.

- Many are mad at Andy for the game he is playing and while I do not think it is perfect, he is getting blamed for things others have done in the past. For instance, this week Andy backstabbed one alliance where he would have been third for an alliance with a terrible name and gesture. Last season Ian schooled Boogie (and Frank) so he did not end up third by going with the Quack Pack. Ian won last season. Is this now Andy’s season to win?

Are you sad to see either houseguest go? Do you wish Julie brought up Amanda’s racist remarks? But first, what episode of the 500 was your favorite? I personally liked #67, #233, and #356. Let me know in the comments or @eastwoodmcfly. Also be sure to let me know what episodes I just picked by typing in random numbers on my keyboard.
Posted by Dual Redundancy at 10:32 PM