ML- Believe it or not, former Emmy darling 30 Rock and sic-fi redheaded stepchild Fringe share many of the same attributes. Both were low-rated, and probably survived due to NBC and FOX's desire to stay in Tina Fey and J.J. Abrams' good graces, respectfully. More than that, both were unapologetically absurd critical darlings with tight, dynamite core casts. They took risks, most notably with episodes that defied the norm -- Fringe had the musical episode, the cartoon episode and the Monty Python-esque "Black Umbrella" from this season, while 30 Rock cranked out reality show parodies and two stellar live shows (the second of which Dual co-host Dave and I were in the audience for!), but almost every episode of either show appeared out-of-the-box when compared to any other show on TV.

Above all, both will be terribly missed. 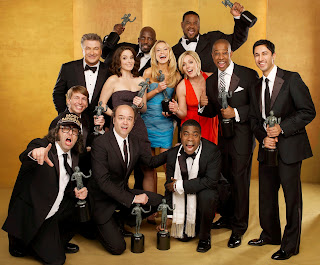 30 Rock deserved every award it ever won, which is an honor it's Emmy successor Modern Family doesn't share. It deserves many it didn't win, as well -- Jane Krakowski and her portrayal of Jenna should be commemorated in a museum somewhere, somehow. Every facet of Tina Fey's brainchild worked in near-mint condition from start to finish, due to the perfect combination of writers and actors. I can't imagine anyone but Alec Baldwin reading Jack Donaghy's lines, and frankly I don't want to. The same goes for Tracy Morgan, and Jack MacBrayer, and obviously Tina Fey. 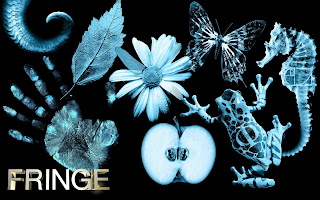 Fringe may not have had an endless vault of guest stars (though Leonard Nemoy and Peter Weller are nothing to sneeze at), but made up for it by utilizing its stars as much as possible. At one time Anna Torv was playing three different iterations of Olivia Dunham, spread across multiple universes and timelines, each with her own distinct personality. John Noble, Jasika Nicole, Lance Reddick, Blair Brown and Seth Gabel also took up the task of exploring different versions of their own characters, no doubt confusing the hell out of casual viewers and sending them, God forbid, out on Friday nights.

The best Fringe seasons -- because yes, there were bad ones -- were those that maximized on the complexities of the alternate universes without getting too bogged-down in the confusing, ultimately rather meaningless mythologies of the show. Some twists were head-scratching in a good way, where you spent hours wrapping you head around plot points like Walter's voyage back in time, across universes to save his son's alternate persona. Others never really ended up anywhere, like "The Pattern" from early on in the series. Like Lost, this show proved the most satisfactory way to watch sic-fi shows is to focus on the characters' relationships and let the mythologies entertain you, but not consume your thinking.

Neither show allowed itself to become stagnant. Fringe flip-flopped formulas frequently (sorry about all that alliteration), balancing the serialized and the episodic with as much grace as can be expected from such shifts in storytelling styles. 30 Rock kept the jokes and pop-culture references fresh, while still maintaing the break-neck speed at which they were delivered.

I'm not sure what legacy these shows will leave. Both are already in syndication, with Fringe limited to Science Channel and 30 Rock available on Comedy Central and WGN. While 30 Rock may attract more eyes on TV and on Netflix, -- where all past episodes currently reside -- I'm not sure the references will hold up for future generations, especially if NBC's recent success continues to build. I've watched the show with those less immersed in Hollywood gossip and pop culture references, and common reactions include blank stares and asking for jokes to be repeated and/or explained. The show was for pop culture nerds, by pop culture nerds, and hopefully will be treasured by the rabid fans for years to come.

While I often felt smart watching 30 Rock, it wasn't uncommon for me to be dumbfounded and glazed-over during denser episodes of Fringe. Fringe appeals to a different breed of nerd, one inspired by the scientific and technological possibilities the show presents. Science Channel is obviously the perfect outlet, where it can exist as it always had; beloved by the small few who fully respected its worth to television and society at large. A fitting resting place for a gem of a show.

Let's let the clamoring for spinoffs, movies and reboots end before they begin. Both shows lasted longer than Hollywood conventions would normally allow, a victory in itself. These shows, these stories, these characters and their relationships and their quirks have entertained us for years, but now is the time to let them go. Tina Fey already has a deal with NBC for more comedy; if there's any justice to this world, Jane and Tracy will find their "dumb gay Batman" roles by fall. I know Anna Torv and Joshua Jackson are taking time off to let Olivia and Peter out of their systems, but both will make stellar additions to casts, and possibly leads of their own vehicles. The sky is the limit for the talented casts, much deserved after all their hard work.

When I lie down to sleep tonight, after probably crying like a baby to the 30 Rock finale (8:00PM on NBC!), I'll imagine myself submerged in Walter Bishop's dream tank. There, the magic and the mayhem will still be real, still inspire me and what I watch and write and live. The most important things these shows taught me: nothing is impossible, be it crossing between universes or putting on a long-running comedy series.
Posted by Dual Redundancy at 2:04 PM