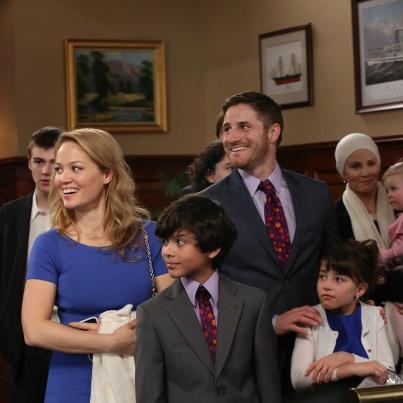 ML- I've gotten several worried texts and tweets about Tuesday's Parenthood finale -- specifically, people are worried the show wrapped itself up too tightly, too well, and is headed for the cancellation we all feared NBC would bring down upon it years ago. Based on everything I've read, both from interviews with creator Jason Katims and sites specializing in predicting renewals and cancellations, the show is a safe bet to return in the Fall (or perhaps in the spring, given NBC's erratic and shortened programming history for the modestly performing family drama).

The worry, hopefully, will be assuaged, but we should really focus on the source of all our fears: the strength of the finale. Was it a perfect Parenthood episode? No. I'd argue the season's best episode was The Talk, or perhaps One More Weekend With You, but the finale dealt with the difficult task of paying off all the season's story lines, and I'd argue it did so brilliantly. Touching on Kristina/Adam, Julia/Victor, Crosby/Jasmine/Rene, Sarah/Hank/Mark and even Drew, everything was wrapped up neatly with a tear-stained bow. Some will dislike the finale for being so conclusive. Not me.

This Parenthood season was radiant, smaller in scope than all previous seasons and nearly every other show on TV. Though we only received 15 episodes, it allowed for less filler episodes and longer, more detailed arcs for our beloved Bravermen. 13-episodes is the standard for cable seasons, and I pray that the networks begin developing smarter shows with shorter seasons. That means more seasons needed for syndication rights, and more shows on the air means more risks. But while procedurals and comedies benefit from non-serialized scheduling and can run as many episodes as they wish, shows like Parenthood -- if there is another show quite like it currently on air -- need a smaller space within which to grow and flourish.

Fewer, tighter stories were one contributing factor to the understated magic of the season. The other: the unyielding nerve to bring out the best and the worst in the characters, when applicable. I'm shocked at how cyclical my appreciation of characters is on this show. In the beginning I despised Crosby, Max, Julia and Kristina; now, my frustrations lie more with Sarah, Camille, Jasmine and Adam. It's a testament to the actors and the writers never to let the characters become stagnant, and a great joy of watching the show to continually be surprised.

This was the year Kristina became vulnerable. Always the Bravest of the Braverman clan, she was forced to ask for help from Adam, Camille and even Haddie as her body began to fail. Monica Potter was obviously the MVP of the season and deserves serious Emmy attention. I knew she'd be fine, in the spirit of doing self-contained stories per season, but I'm sure the character will be fundamentally changed for the better. She'll hopefully be less judgmental and spend less time looking for busy work to fill her time and just relax. A more low-maintenance Kristina will be a sight for sore eyes, at least until Max descends further into puberty.

Conversely, this was the year Max became brave. He frequently stepped outside of his comfort zone, be it running for student council and giving a rousing speech, or going to the dance, or talking with Adam about his changing body. He still has a ways to go, but I appreciate how he knew the line of where he was comfortable talking about girls. Burkholder rocks this thankless role, but is rewarded with many of the show's comic relief moments -- like banging the judge's gavel obnoxiously. My only wish was that he'd have put more effort into getting the vending machine himself and not allowing Kristina to handle it all, but that might have been too unrealistic given his condition and less thematically satisfying given Kristina's hardships she fought to overcome.

This was the year Adam became calm. Prone to freak outs in past seasons, he rarely had to blow up as much. I guess that can be contributed to Crosby and Amber stepping up the plate at work, less Haddie stress and the need to be the rock in Kristina's life. Peter Krause has grown into such a benevolent force of acting greatness, still expressing the chops he showed off in Six Feet Under with a matured, genuine presence that ties the whole show together. That Hawaiian vacation was well-deserved (but damn, it must have been a FANTASTIC month at the Luncheonette in order for Haddie's college debt to be a thing of the past and Hawaiian vacations to be balanced along with medical bills).

This was the year Crosby became responsible. I'd always wait for him to screw up any and every task assigned to him, but aside from the parking situation and the dog incident, he really manned up, bit his tongue and got his head on straight this season. I'm not sure if he'll be able to keep it together once Jasmine's new baby arrives, but he's made great strides, and Dax Shephard has finally grown on me as an actor.

This was the year Julia became selfless. Her baby-mongering last season was heartbreaking, but the decision to take home Victor seemed rather rash and self-serving. I was impressed when she quit her high-paying job in order to focus on family. She stayed in that cat the whole afternoon while Victor was in school. She put up with the worst of his anger and his fear and his need for attention. She could have backed out and not gone through with the adoption, but that, too, would have been a selfish act fo the new and improved Julia. She proved herself to be a great mother to two different but exceptional kids, and I'm excited to see her back on the job market next year.

This was also the year Joel grew a backbone. He voiced his opinion more often this season, walking away from the conversation as Julia nearly abandoned Victor and laying down the law when Ryan screwed up at work. Still basically Superman, he managed to avoid being a push-over while still acting with his heart. I'd love a really big Joel story line next year- maybe introduce some of his family? It's time Sam Jaeger received some spotlight.

This was the year Victor became tortured. It was also the year we met Victor, but his struggle was one the show handled exceptionally well and led to an eventual love. I've never been in his shoes, but I know kids who have gone through his exact situation and how hard of an adjustment it was. The young actor Xolo Mariduena showed some great comedic and dramatic talent and is a welcome addition to the Braverman clan.

This was the year Sarah became selfish. Always a hard-working single mom, she now had a self-sufficient daughter and a son in the throes of manhood. Sarah took a hard look at her life with Mark and decided it wasn't right for her, and rather than settle down, she acted out. She went for it with Hank, despite what the family would think or how it would affect Drew's living arrangements, because she needed it. Do I respect her for that? Not fully, especially since I think she should have chosen Mark in the end over Hank. I figured she'd end up alone, just be her own choice, in a Bachelorette-style decision that neither man met her needs. By taking some "me" time, Sarah may have helped curb a mid-life crisis and gives her a better idea of the type of man she needs for the type of woman she wants to become.

This was the year Drew became an adult. He made adult decisions. Tired of being strung around by a mother with different priorities, Drew did what Amber never could and got into his dream college, seemingly all on his own. He also went through the trauma of Amy's abortion, again, almost all on his own. I hope we don't see him shipped off to school, all on his own, like Haddie, as Miles Heizer has made great strides in making the character likable and memorable. Never the most exciting Braverman, I've gained way more respect for him.

This was the year Amber and Ryan got to be stupid. Don't get me wrong, I love them together, but their Romeo & Juliet professions of love were so melodramatic and over the top that it seemed so unrealistic... and yet, so realistic of young lovers with nothing on their minds but each other. I'm sure Amber will be a great source of therapeutic and spiritual wellness for Ryan as he deals with all PTSD-related aftershocks, I just hope their relationship can withstand the stress it'll put on the both of them. I say let them be young, dumb, adorable kids and if next season ends in their wedding, Mazel Tov!

Hopefully, next year will be the year Jasmine and Jabbar get great stories dealing with the impending birth, and Zeek and Camille finally get some good screen time -- a death, perhaps? The show has covered just about everything else.

And I think that deserves to be mentioned. I never consider this show to be "soapy", but instead think of it as a voyeuristic peek into a real family. Ok, maybe they're nothing like your family, but I guarantee there's a family out there going through cancer, and adoption, and affairs, and pregnancy (wanted and unwanted), and Aspergers, and college, and anxiety disorders. The show handles all these with tact and respect and never cheapens the exploitation with half-heartedness.

Bravo to Jason Katims on the script, right in his wheelhouse of emotional, monologue-heavy scenes he perfected while on Friday Night Lights. In many ways, this episode reminded me of "Always", the aforementioned's series finale, or the finale from last season where Crosby and Jasmine got married. They all deal with important family events, though this episode may have suffered from having next-to-no "shocking" moments, save Jasmine's big reveal. Everything sorta worked out, which is not the harshest complaint one could have about a finale.

Thanks to all of you who read my reviews this year, especially when I strayed from covering on a weekly basis due to work and school and life. I was always watching, and analyzing and usually tearing up at the outstanding program NBC & Imagine Entertainment put forth. These characters, as you can see, have special places in my heart and their stories will follow me as I grow.

I know in my heart this won't be the last we see the Braverman bunch. Such a celebration of life, love and, above all, family needs to be on TV for years to come.