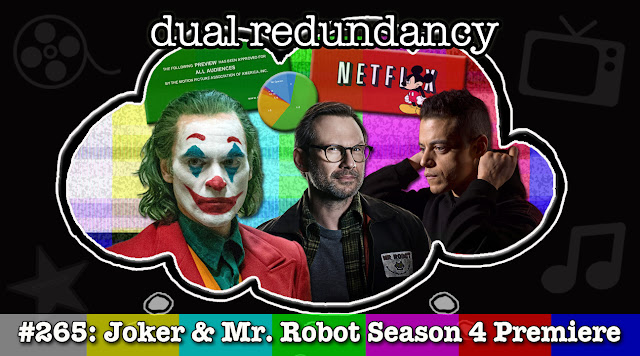 In this week's episode David, John and Kyle discuss who has the upper hand in the streaming service wars and how Disney is banning Netflix advertisements on their TV networks (1:50). We also discuss how many trailers moviegoers want to see before their film according to a Hollywood Reporter poll (11:30). Next we look at the controversial film Joker starring Joaquin Phoenix (19:55). Finally, we review Mr. Robot’s season four premiere entitled “401 Unauthorized” (51:25).

You can also listen to past episodes of the podcast on iTunes or on our YouTube channel. Also be sure to subscribe to our Twitch channel!
Posted by Dual Redundancy at 3:54 AM