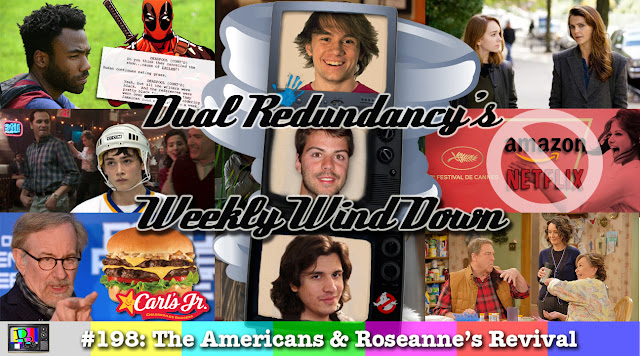 In this week's episode David, John and Kyle discuss how Netflix and Amazon can’t compete at the Cannes Film Festival (2:20), the beef between Steven Spielberg and SpielBurgers from Carl’s Jr. (9:55) and if Donald Glover was “too busy” for the Deadpool animated series (16:45). We also review the first two episodes of The Americans’ sixth and final season entitled “Dead Hand” and “Tchaikovsky” (25:25) Finally, we discuss the return of Roseanne including the premiere “Twenty Years to Life” (40:00).

You can also listen to past episodes of the podcast on iTunes or on our YouTube channel.
Posted by Dual Redundancy at 1:51 PM