Podcast Episode 116: With Bob and David, Into the Badlands and Fallout 4 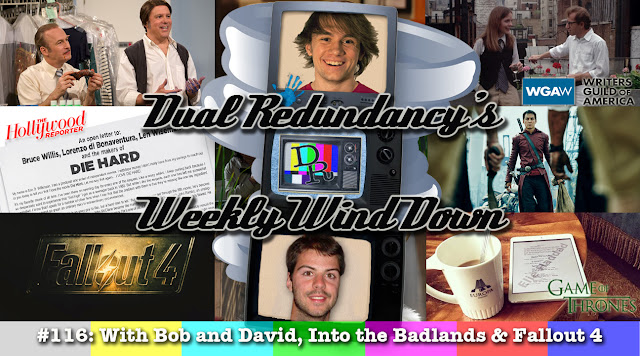 In this week's episode Dave and Kyle discuss Stephen Colbert's Late Show obtaining the post Super Bowl 50 spot (2:15), Annie Hall being named the funniest screenplay by the WGA (8:00) and why Disney is not pre-screening Star Wars Episode 7 (14:25). They also discuss a Russian television channel leaking nuclear torpedo plans (19:40), a Game of Thrones actor posting a future script page (23:20) and a pitch of a Die Hard sequel in The Hollywood Reporter (27:55). Next they review Netflix’s With Bob and David (34:50) and the series premiere of Into the Badlands (45:25). Finally, John sends in a review of the video game Fallout 4 (54:20).

This week's episode was originally a YouTube exclusive! Make sure you never miss an episode by subscribing to us on YouTube. You can also listen to past episodes of the podcast on there or on iTunes.
Posted by Dual Redundancy at 9:17 AM

Email ThisBlogThis!Share to TwitterShare to FacebookShare to Pinterest
Labels: Annie Hall, Die Hard 6, Fallout 4, Game of Thrones, Into the Badlands, Into the Badlands premiere, Star Wars VII, Super Bowl 50, The Hollywood Reporter, The Late Show with Stephen Colbert, With Bob and David