Podcast Episode 112: The Premieres of Fargo, Crazy Ex-Girlfriend and The Walking Dead 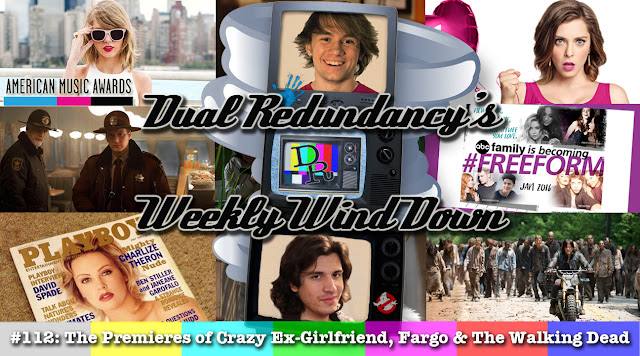 In this week's episode we discuss the nominations for the 2015 American Music Awards (2:10), ABC Family being rebranded as Freeform (8:00) and Playboy’s announcement that their magazines will no longer feature their iconic photographs (14:30). We also review the series premiere of Crazy Ex-Girlfriend entitled “Josh Just Happens to Live Here!” (20:40), the season two premiere of Fargo entitled “Waiting for Dutch” (32:10) and the season six premiere of The Walking Dead entitled “First Time Again” (46:00).

You can also listen to past episodes of the podcast on iTunes or on our YouTube channel.
Posted by Dual Redundancy at 8:23 AM