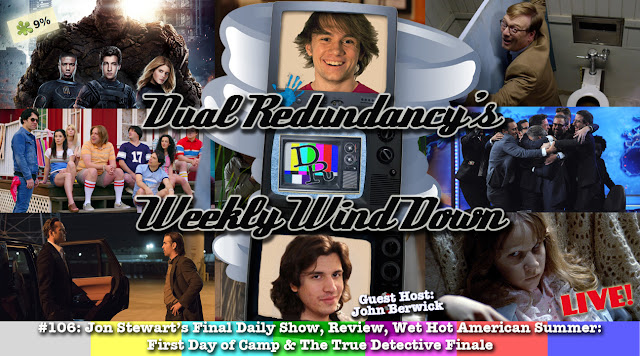 In this week's episode we discuss the drama surrounding director Josh Trank’s comments regarding his Fantastic Four film (1:55). We also react to Destination America’s live televised exorcism (9:00) and the winners of the 31st Television Critics Association Awards (12:40). We also recap the series finale of The Daily Show with Jon Stewart (16:42) and review the season two premiere of Comedy Central’s Review (25:10). Finally, we look at all of Wet Hot American Summer: First Day of Camp (33:00) and True Detective season two (44:25).

You can also listen to past episodes of the podcast on iTunes or on our YouTube channel.
Posted by Dual Redundancy at 6:34 AM