Podcast Episode 101: The Premieres of UnREAL and Hannibal and the Community Finale 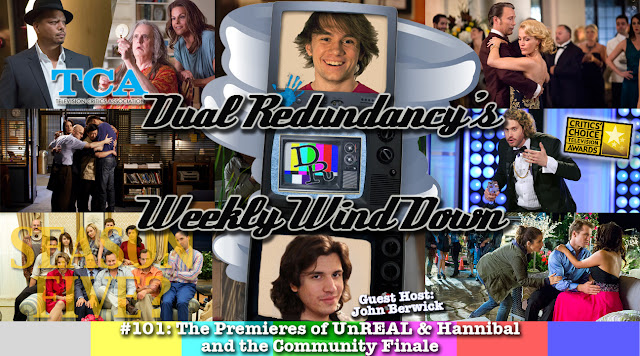 In this week's episode with guest host John Berwick we react to the Television Critics Association nominations (2:12) and to the winners of the 5th Annual Critics’ Choice Television Awards (9:04). We also discuss the possibility of Arrested Development season five (12:40). Finally, we review the series premiere of UnREAL entitled “Return” (16:43) the possible series finale of Community entitled “Emotional Consequences of Broadcast Television” (28:00) and the season three premiere of Hannibal entitled “Antipasto” (40:54).

You can also listen to past episodes of the podcast on iTunes or on our YouTube channel.
Posted by Dual Redundancy at 6:31 AM