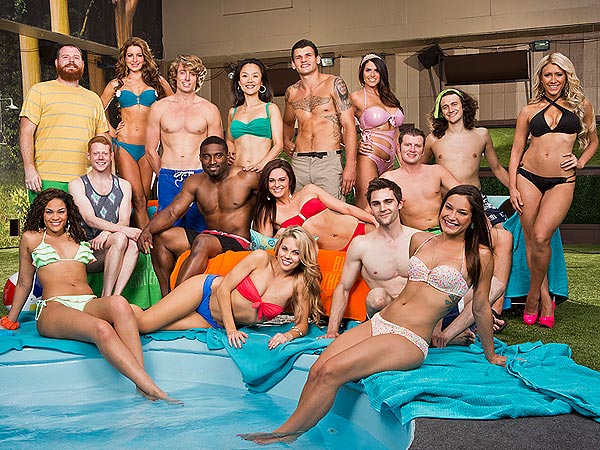 DA- Finally it is summer and that means a few things; popsicles, sunburn, a possibility of sudden downpours all day, and of course BIG BROTHER! This summer should be longer and hotter than ever. No, not because of climate change but because we have a big young cast of “hotties” trapped on a soundstage in a house for a longer 90 days.

As most premieres start, we get to see all the contestants in their natural habitats before they had any clue they were about to be a part of a reality show (good thing a camera crew just happened to be there to catch their reactions!) This season we have three miscellaneous brunettes, Jeff Spicoli, a pizza delivery boy, and the bombshell? A train conductor! Talk about some all-stars!

Usually premiere night HOH competitions involve various sexual undertones and tonight was no different. Tonight houseguests had to straddle and hold on to floating popsicles that were sprayed and squirted with various substances from a giant mouth whose tongue would “bump” them and their popsicle.

Now for me I would not work so hard in getting HOH especially on the first night. Sure it guarantees immunity but you create a lot of enemies and in a 90-day game creating them on night one is very early. Not to mention with the new twist this season of three nominees (and the old veto still in play) there is a great chance neither of your two nominees will go home! Then next week you have two people to worry about coming after you when you cannot compete for HOH yourself!

Anyways in the end McCrae, the pizza delivery boy, wins while Jeremy wins a never-not pass for the season. Before McCrae can celebrate his win host Julie Chen reveals the twists of not only three nominees but also of the MVP award. Now this title, chosen by America, will be given each week to a houseguest who is playing the best game.

While this is supposedly being done to eliminate floaters, originally I hated this idea. At first I thought the houseguests would know who the MVP is each week and begin to target America’s favorite. They may wonder how someone like quiet “Bob” is playing a great game when he is loyal and with their alliance. They may wonder if “Bob” is secretly pulling the strings and realize they need to get him out! While this does not seem like the case and the MVP will be anonymous for the houseguests, it will be interesting to see if America will really choose the best player or just their favorite. I still am not a big fan of this twist especially if it eliminates people being frank and truthful in the diary room. Will houseguests be open to insulting or backstabbing others when they know America may hate them and punish them in the process by choosing their enemy as the MVP? Only time will tell if this twist will enhance the game and thankfully with 90 days we sure have a lot of time to waste.

- I feel as though it should be mentioned since it was kind of glossed over during the show that GinaMarie is from Staten Island…or so I have heard a few thousand times.

- I love how everyone always thinks his or her career is a target for them. Helen is worried that her politics background will hurt her against the 20-somethings on a summer reality show where they have to hang on to giant popsicles in a competition. Meanwhile McCrae tells the truth and every single person in the house calls him a liar because of his “genius vibe.” Sometimes you just can’t win.

- While nobody really has stuck out yet to me (Andy and Nick are at least ones I am not completely annoyed with and am watching right now) I am already counting down the days for Jeremy. Between him yelling in the diary room like Dan Gheesling or Chef Joe and him being involved in at least two secret alliances within the first hour, I can’t wait to see it all come crashing down for him so soon.

- Also I don’t understand why Big Brother: After Dark will be on the TV Guide Network instead of Showtime this year. Sure viewership is probably going down but the words “after dark” alone promises it to be an uncensored look into the Big Brother house. However, all the cursing, nudity, and crazy shenanigans will be censored on a cable channel like TV Guide. While I am excited I have the chance to finally watch it, I feel as though it is a downgrade overall.

- Speaking of extra footage all of these recaps will for the most part be live feeds-free. Also instead of doing three recaps a week I will try and keep some sort of life this summer and just do a weekly recap summarizing the week. Look for them on Friday afternoons.

That is all for day one in the Big Brother house. But first, why don’t you tell me who is impressing you already and what you think of the two big twists either below in the comments or @eastwoodmcfly.
Posted by Dual Redundancy at 9:12 AM